Besides the year of 1957, in which the committee did not choose a theme, every Ball State homecoming has followed a theme. Here are some of Ball State’s notable homecoming themes from 1958 to the present: 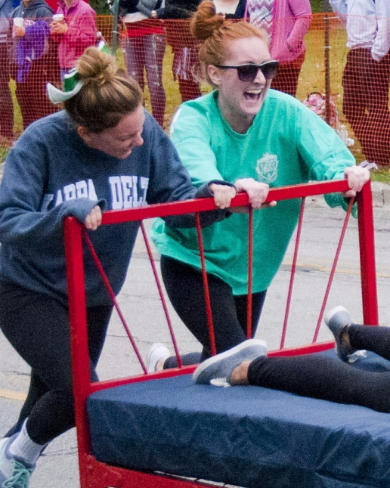 Students race down Riverside Ave. for the annual Bed Races on Oct. 10 as a part of Homecoming Week. DN FILE PHOTO BECCA TAPP

This year's is "the Greatest Show on Turf." Think circus, but combined with the annual football game that’s played on Scheumann Stadium's turf.

That’s what the steering committee imagined when planning the theme for the event that will begin in October.

Choosing a theme is a decades-old tradition.

Ball State's presented its first homecoming in 1957, but it wasn’t until the second year  that the event’s committee began assigning a theme to its annual tradition. The first theme was “Fiesta.”

Not only do the themes change every year, but no homecoming is quite like the year before, Williams said. The committee attempts to build onto what's been done in the past.

This year's homecoming will have more attractions in the Homecoming Village.

Jonah Katz, a senior marketing major and committee member, thinks the new theme will present a great opportunity for students to get involved.

“This is one of those themes where we can really do a lot of different things in terms of events and student engagement,” Katz said.

May the homecoming hype begin.