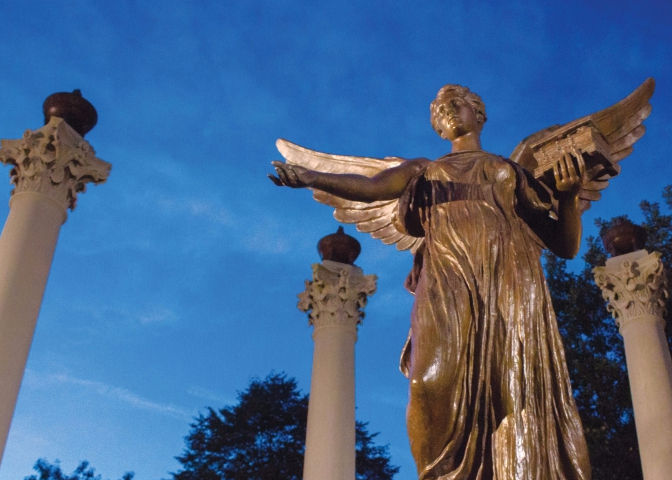 The Beneficence statue was sculpted by Daniel Chester French and represents his last commissioned work. Benny has been part of Ball State’s campus since 1937. The Student Alumni Relations Team and Student Alumni Association held a birthday bash for Benny this year, commemorating her 75th birthday. DN FILE PHOTO TAYLOR IRBY

After his first experience in Slovenia in 1995, Dom Caristi has gone on one more Fulbright trip to Greece, become a Fulbright ambassador and is Ball State’s Fulbright adviser. He has even applied to go on a third trip.

“I’m their biggest cheerleader ... There are plenty of more prestigious Fulbrighters than me. There are members of the U.S. Senate, House of Representatives. There are captains of industry,” Caristi said. “They’re more famous and more accomplished, but there’s nobody who’s more enthusiastic about it than me.”

The telecommunications professor works with Barb Stedman, director of national and international scholarships, to recruit students and help them apply for the Fulbright.

Fulbright is an international program for both students and professors that provides opportunities to teach, study and research in more than 140 countries. Caristi participated in the Fulbright Scholar program, but he primarily advises students for the Fulbright U.S. Student Program.

A bachelor’s degree or equivalent is required, so students often apply during their last year of undergraduate study. If they are accepted, they take part in the program during the year after graduation.

For the last five years, three or four people from Ball State have participated in the program. In 2014-15, four Ball State graduates were accepted. The students went to Germany, the United Kingdom, Hungary and Malaysia.

“For everyone who goes, it’s life changing,” Caristi said.

Three of the students went on their Fulbrights during the 2014-15 academic year, but Taylor Byrd did not start her program until January 2015 because Malaysia has a different academic year. She went to Sabah, Malaysia, for an English teaching assistantship, and will stay there until November 2015.

Byrd graduated from Ball State with an English language arts education degree and hoped her Fulbright experience would help her become a better educator. Before Fulbright, Byrd had only worked with upper level ninth graders and AP classes. She said switching to English as a second language was an adjustment.

While Byrd had an education degree, Meghan Reidy’s only teaching experience was as a teaching assistant. Reidy went to Erkner, Germany for an English teaching assistantship. In Germany, she taught students from grades 5-12.

“I’ve never been responsible for education before,” Reidy said. “Giving even a 10-minute speech in class used to terrify me, but now 12 times a week I’m giving 45-minute lessons with pretty difficult concept material, and sometimes I have to explain in a language that’s not even my native language. It’s wonderful that I’ve discovered that I can trust myself to do something like this.”

While spending an academic year abroad, Fulbright participants experience the many cultural differences between their host country and the U.S.

“The worst thing you can do is go somewhere else and want it to be the U.S. You go other places because you want something different,” Caristi said.

Byrd said a lot of the differences she noticed were because Malaysia was a primarily Muslim country. In classes, boys are usually in one part of the room while girls are in the other. 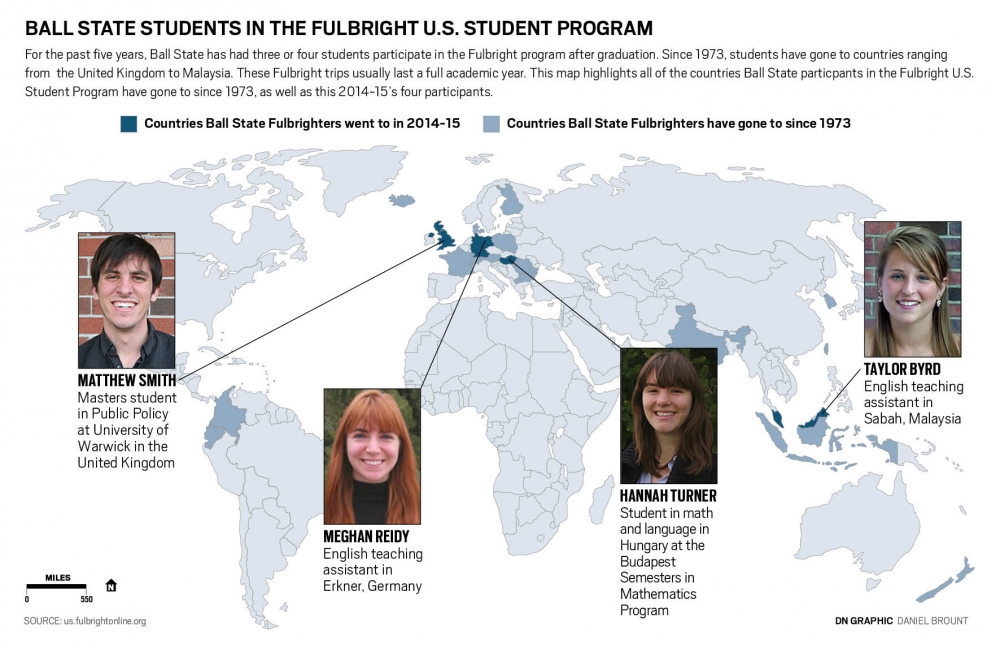 “At first I thought it was going to cause the girls to be a little bit more shy and not speak up because typically they were pushed to the back so the boys could sit up front. But it turns out that it's the boys who are silenced by the girls,” Byrd said. “It’s kind of cool to see because even though they're supposed to be quiet and respectful young ladies, they still have their ways of making sure their voices are heard.”

Each time Reidy started teaching a new class, she introduced herself to all the students and gave them time to ask her questions.

“I got asked things like, ‘Do you have any guns?’ and ‘Why are you not fat?’ And you think, wow, this image they have of Americans they must be getting it from popular culture, from the news or from their parents,” Reidy said. “I think I wasn’t what a lot of them were expecting.”

In Malaysia, Byrd said, “Everyone loves America and everything about it.” The schools hosted camps on the weekends for students, and one was a “Frozen” camp. Byrd said a lot of the students there really enjoyed Disney princess movies.

Byrd said her favorite part of Fulbright so far has been her interactions with students. While the language barrier sometimes made it difficult to have deep conversations, she had a few personal moments after getting to know the children.

One day, a student asked her to go to the library with her. There, they looked at magazines on Malaysian fashion, but then the student started to talk to Byrd about her family.

“I was really glad that she felt comfortable enough to have that exchange with me and try to use her English. Those little exchanges inside and out of school are my favorite,” Byrd said. “Those are the most rewarding.”

Caristi remembers making connections with the people he met in Slovenia and Greece.

“The kids who are learning English from Taylor [Byrd] are going to love the United States forever, because they’re going to fall in love with her,” Caristi said. “It really is a peace initiative. You really are an ambassador when you go overseas.”

Stedman said that idea of being a cultural ambassador and positively representing the U.S. is what makes Fulbright so important.

“It’s when you start to dream in the language of the culture that you’re living in that you know you’ve really arrived,” Stedman said. “It’s what the program is about: creating cross-cultural understanding, creating a more peaceful world one person at a time. That’s what Fulbright is about.” 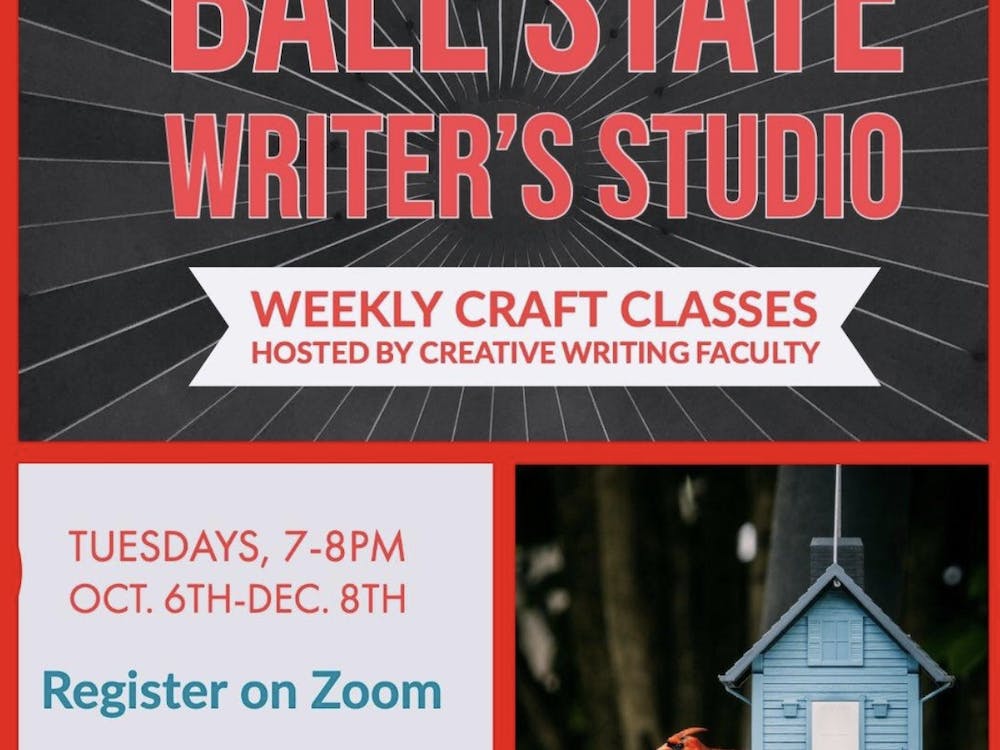