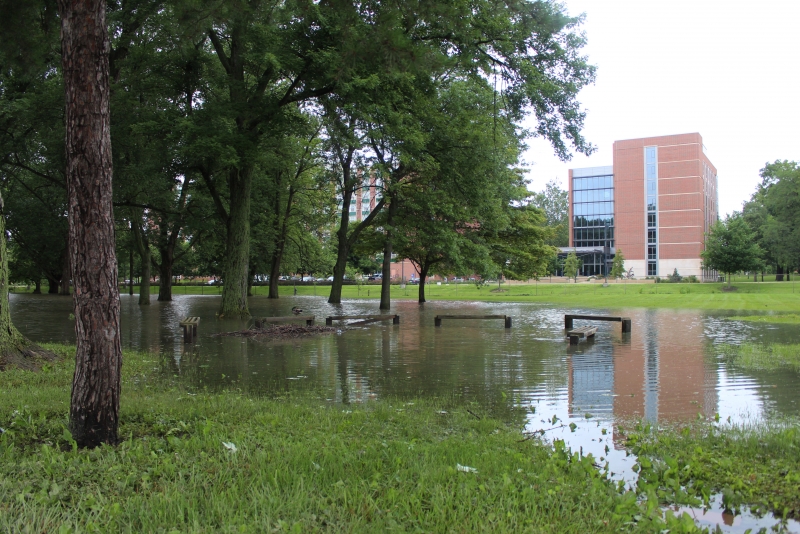 Jim Lowe, director of engineering, construction and operations, said the university is looking at several solutions to minimize flood damage in the future.

Backflow devices prevent water from moving from the exterior of a building to its interior. They generally have a plate or other mechanism that blocks out water not flowing in the normal direction.

Adjusting the size of drains at the bottom of ramps

Sump pumps are used to remove accumulating water. Once the water is inside the sump, it is removed through drain lines.

Filling up cracks in basement walls

If walls are completely sealed, then water cannot seep through the cracks.

While Jim Lowe, director of engineering, construction and operations, said he didn't have an estimate of the total cost from the flood, he said a lot of the costs would be from the manpower. Other costs would include power to run the fans and dehumidifiers to dry affected areas, small areas of flooring that might need replacing and other minor fixes.

The flooding affected the entire campus from LaFollette Complex to Elliott Hall.

“Every one of these buildings took in water in a different fashion,” Lowe said. “It’s pretty spaced out. It’s a broad range of opportunity, and it’s a dynamic change as well. A discussion on improvements today might be different from five years from now because campus is always changing.”

Because of the expansive range, Lowe is looking at the problems individually to see why different buildings had flooding instead of trying a one-size fits all approach.

Of all the buildings on campus, Lowe said the water affected the Wagoner and Noyer Complexes the most.

While flooding hit campus, it also had a significant impact on the surrounding area.

Because of the flooding throughout the community, Muncie Mayor Dennis Tyler tweeted on Friday that sandbags were available and that the fire department water rescue crews are ready if emergency assistance is needed.

The National Weather Service reported that there was four inches of rain and flooding on many streets and at the Washington Street Bridge.

Paige Prowant, a senior architecture major, said there was some flooding on her street, but also in her basement apartment. She lives on Alameda Avenue just southeast of campus, and she said she has experienced some flooding before.

After the rain on Friday, there was water on the floor of her kitchen, in the hallways and in one of the closets. There was also a small sewage pipe leak.

Maintenance told her it is planning to add a sump pump to drain the water and a dehumidifier to prevent mold.

At Ball State, the university is also looking at these kinds of fixes.

The university already has many measures in place including sump pumps and backflow devices, Lowe said, but a lot of systems were overtaxed on Friday.

Because so much rain fell in a short amount of time, it was difficult to prevent damage. More than four inches fell throughout the night.

Each time an event like this occurs, Ball State looks at the damage and finds ways to improve the system.

“We have improved the campus immensely over the years in areas where we did have certain flooding that is now not taking place,” Lowe said. “It’s certainly an inconvenience and it’s certainly not an opportunity we ask for, but it also gives us an opportunity to pause and get lessons learned. What can we do to improve?”

Some of the solutions Lowe is looking at include enlarging the sewage or sanitary systems and changing the way wastewater is managed.

At the L.A. Pittenger Student Center, some water got in through the doors. So facilities planning researched solutions to slow the water. They are planning on buying some buoy devices that would help block water from getting into doors.

Ball State and the community are also working toward separating storm drainage and sanitary sewage.

Four years ago, Ball State installed a stormline under Dick Street from Riverside to University Avenue. Currently, funding is available to do the same under Martin Street and in the Quad area. Lowe said these kinds of projects “will help us tremendously.”

As far as stopping water while a storm is happening, Lowe said having additional staff come out and work from Friday night through Saturday helped prevent a lot of additional damage.

“That’s the secret with a flood. When you have water entering the building, if you can react quickly to removing that water, you minimize [or] prevent damage,” Lowe said. “In this case, there was enough staff on hand that we really minimized the damage to the campus.”