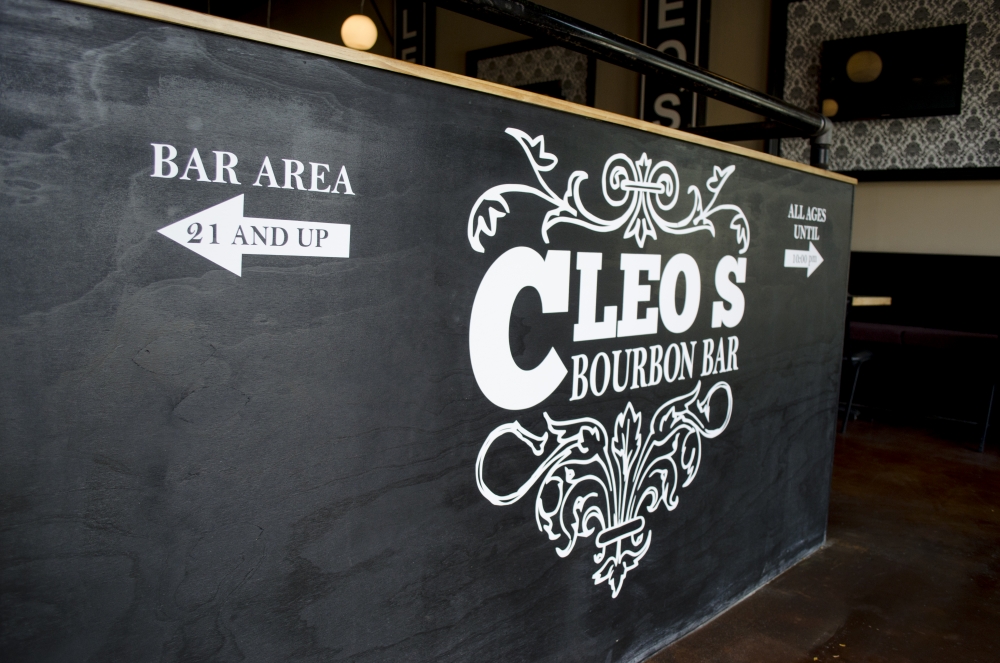 Cleo’s Bourbon Bar is now all ages until 10 p.m. every day of the week. Cleo’s went under renovations during the summer. DN PHOTO BREANNA DAUGHERTY

There’s the front door with neon beer signs hanging on each side. Up above are oversized light bulb letters spelling out “Cleo’s” and “bourbon.” The Sir Nacho’s sign on the side door is plastered with a cartoon sombrero and mustache.

“People walk in now and it’s confusing,” Clements said. ““There are things we’re going to be able to do together that before, just weren't possible.”

It’s easy to see the inspiration behind the name. The three entrepreneurs hope to create a new energy with the re-branded margarita night spot. Clements said they plan to build a DJ booth above the door and a tiki thatch roof over the bar.

The plan, for now, is to close Cleo’s on June 1 for the minor construction and to reopen Three Amigos no later than June 10. There will be kinks to work out, Clements said, but much of the transition will be pretty painless.

Kitchens are nothing new to Escamilla. He started washing dishes for his father, who owns and helps operate Muncie’s popular Mexican joint Puerta Vallarta, at age 12. Escamilla learned a thing or two while working for the chain.

“You’ll see 15 girls walk in [at Puerta Vallarta] and start drinking margaritas, but you can’t go talk to them,” Escamilla said with a laugh.

It’s not all about flirting over margaritas; Escamilla really wants people to have a good time at Three Amigos. Between the 20 different flavors of margarita slated to be stocked at the new bar, and the food already offered at Sir Nacho’s, he said it will be the best of both worlds.

Three Amigos will not be open to all ages like Cleo’s is now, Clements said. There will, however, be waiters that carry menus and food out to tables. The booth that currently spans the full length of the building will be replaced by a series of booths placed back-to-back along the wall.

Margaritas-to-go are another hopeful addition. Clements said they still have to work with Indiana excise police and figure out some of the logistics before the mobile margarita is set in stone. For now, the plan is to sell them in a sealed Ball jar that customers can take home.

“By the time school starts, we want everything to be tweaked out,” Clements said. “We’re talking black lights everywhere — it’s going to be a cool, sexy margarita bar.”

Ellison and Clements are moving Cleo’s downtown, where they hope to appeal to the older crowd away from campus. It’s all about rebranding, Clements said.

“We aren’t going anywhere,” he said. “These big rumors that we’re going out of business, no — we’re changing and evolving. We’re freshening up the concept.”

By Derran Cobb / 19 minutes ago