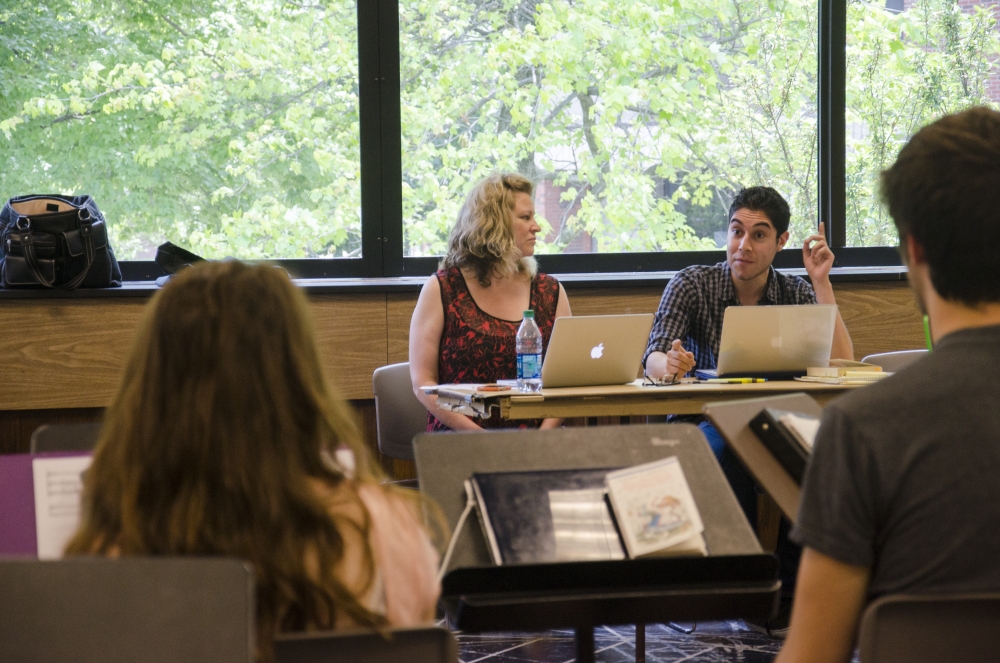 Cristian Guerrero, right, is one of the three creators of “Mad World” traveled from Los Angeles to Muncie to aid Ball State faculty and students to workshop the musical. Guerrero, along with the other creators, started working on the show five years ago. DN PHOTO BREANNA DAUGHERTY

With a week to prepare for a staged reading, the writers of the new musical “Mad World” have revised scenes, added new music and even added a new character.

In preparation for a staged reading on May 29 at Muncie Civic Theatre, “Mad World” creators Cristian Guerrero, Chandler Patton and Steven Schmidt traveled from L.A. to Muncie to work with Ball State students and faculty on workshopping the musical.

“I think what makes this such a great project for the students is that it’s truly collaborative,” said Eva Patton, “Mad World” director and an associate professor in the department of theatre and dance. “Everyone is contributing and sharing in a generous way to help develop this piece, which is fantastic to see.”

At Ball State’s first Discovery New Musical Theatre Festival in Summer 2014, “Madworld” was selected as the first place winner out of more than 100 entries. Guerrero said he and the show’s other creators started working on the show five years ago when he was 17, and they have been working on it since.

“We happened upon the subject matter — honestly it was a Wikipedia search in the beginning — and we looked at the initial research,” Guerrero said. “And we said we don’t know what this is, but we think there’s a musical in there.”

After working on the show for several years, they submitted it to the Discovery New Musical Theatre Festival. During the festival, students performed the top three selected musicals, including “Mad World.”

“To see these people that we don’t know and have no connection to us whatsoever up there saying our words and singing our songs was so cool. It’s a surreal feeling,” Guerrero said

The play follows Lewis Carroll as he first meets Alice Liddell, the inspiration for “Alice’s Adventures in Wonderland.” It explores his journey and what he was feeling during the writing of the book.

“You grow up on the story, and you never really think about the author,” said Zoe Taylor, a sophomore theatre major and an assistant director. “Then it comes to life, and you start to realize the relationship he had to have with this family in order to make this. It’s so much fun to see these characters come to life.”

The goal of the workshop is to prepare another draft of “Mad World” for the staged reading at Muncie Civic Theatre and another reading in L.A. next week. Both performances will ask for audience feedback, which will go toward editing “Mad World” and creating the final draft. Ball State’s theatre and dance department will then perform the show in full during the Fall Semester.

Each of the staged readings will have different casts, but the writers chose to fly John Banes, a senior musical theatre major who plays Carroll, to L.A. for the second performance.

“[Banes is] sensational and his voice is gorgeous, so we want all our family and friends in L.A. who won’t get to see the production at Ball State — they can’t all fly out here — to kind of get a piece of what it’s going to be,” Guerrero said.

With the workshop, the cast and crew are focusing on different segments of the musical each day, making minor and major changes along the way.

“It’s like a constant cold read, and so you just have to rely on your instincts,” Banes said. “It’s always interesting being thrown into a situation.”

The cast and directors have also given feedback to the writers on what they think of the different parts of the musical.

“There’s a sense of helping the writers move the piece along, so they almost become secondhand writers because of how they either perform it or they question it or they challenge what was written,” said Beth Turcotte, founder of the Discovery New Musical Theatre Festival and an associate professor of theatre. “And so they’re involved really on every aspect of the show and the growth of it.”

As the workshop continues, the cast and writers will keep pushing the show’s growth. On Tuesday, Johnna Tavianini, music director and an assistant professor of musical theatre, said the cast had to learn a song written less than 24 hours before.

“One way or another, we’re gonna make sure they’ve got the tools to learn that song and learn it now, so when they come in tomorrow morning, it’s gonna be done,” Tavianini said. “And I think that is an invaluable skill. You have to give opportunities to them. You can’t just be in the classroom and teach that. But an opportunity like this definitely puts them to the challenge.”

By Connor Smith / 2 hours ago

Whenever the Cardinals tried to catch up with the Bobcats, they couldn’t.

The wait is finally over: Cardinals split season-opening, two-match weekend at George Mason

By Evan Weaver / 3 hours ago

It had been exactly 321 days since Ball State last stepped on the court against an opponent that was not its own players.

By Charleston Bowles / 5 hours ago

Ball State Women’s basketball (6-5, 4-3 MAC) returned to the court after its string of cancellations and captured a 68-64 road victory against Eastern Michigan (8-6, 5-4 MAC).