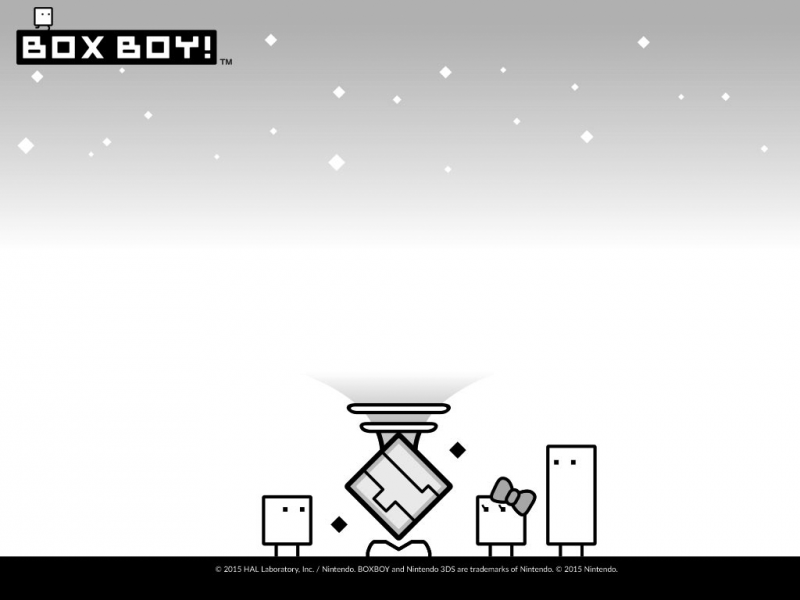 In “Boxboy,” players follow a boxboy named Qbby who is tasked with completing puzzles to further his adventure. There is a thin plot about Qbby’s attempts to save his planet, but the lack of voice acting or any text make the narrative a difficult one to follow. The game makes up for this by populating Qbby’s world with interesting characters. Other box characters are uniquely made to easily to pick them out of their black and white worlds.

Qbby himself is adorable, even his idle animations bring about a sense of glee.

It a shame that while the game is filled with distinct characters, the female boxes are given the shaft. Where Qbby can dress up in a selection of costumes, his female counterpart is relegated to eyelashes and a ponytail. It’s a small gripe, but one that hurts all the more when players see how much could have been done with her character.

The puzzles of “Boxboy” also go beyond what one might expect from a game so simple-looking. The mechanic of using boxes that Qbby spawns out his body to cross-gaps becomes more intricate as the games moves forward. Lasers, spikes and recursive clouds are introduced quickly and players are forced to rethink their previous strategies.

Sadly, though, these gameplay challenges are only based in the world they are introduced in and are quickly forgotten when the player moves on to the next world. Once the player gets comfortable with one mechanic, it’s quickly forgotten. The game is eager to please, giving players as many different elements as possible, but in doing this, the game suffers. Even more disappointing is the ease in which puzzles can be completed. Most puzzles only last about three minutes while others can be completed in seconds. The addition of collectible crowns does pad the length of some levels. I spent several hours trying to get one crown in particular, but overall “Boxboy’s” length doesn’t satisfy.

With “Boxboy,” Hal Laboratories has crafted a game that goes beyond its simple appearance. In a world filled with box-based games, “Boxboy” stands out with its characters and puzzles to create a game that thinks outside the box.