Fire can burn the performers and the onlookers during fire-eating. Avoid playing with fire in strong winds. The fire may blow toward onlookers or blow back into the performer’s face.

Never breathe in when a torch or fuel is in the mouth. The fuel or flames may burn the fire-eater's mouth or throat and may even cause a lung to collapse.

Avoid the metal skewer of the torch as it is the hottest part and can leave burns in and around the mouth. 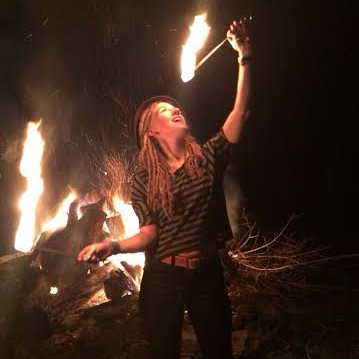 When it comes to fire, most people have the reaction to stop, drop and roll. Kelzie Jo Selch, however, thinks "playtime."

“I really love fire and I’m not scared of it at all,” Selch said.

Selch graduated from Ball State with a degree in glassblowing and she currently works at Be Here Now. About four years ago, Selch got into hula hooping. Shortly after, she incorporated fire into the hooping, becoming a flow artist. She also trails fire on her arms and holds it in her hands.

Selch twirls her lit hoop around her arms, singeing off her arms hairs. She said she loves the adrenaline and the sound created by the rushing fire.

Her tricks have left her with no arm hair, but Selch has very few burns. She douses her skin in fuel to prevent this from happening.

Along with her other fire tricks, Selch eats fire. She does it by lighting torches with camping fuel and extinguishing the flames in her mouth. It took Selch one night to learn how to eat fire.

While hanging out with her fellow flow artists, one asked her if she wanted to try eating fire.

While the flames have little taste, the heat leaves a small sensation.

“When you’re done eating fire, you feel like you ate a hot piece of pizza,” Selch said.

“I love it so much,” Selch said. “I like how hot it is. I think it looks really cool and it’s something a lot of people find dangerous or scary and I don’t think it’s scary at all.”

Selch has already taught another friend the way of the trade, after knowing how to eat fire for only a week.

“The hardest part about learning how to eat fire is doing it the first time,” Selch said. “Because you see this torch of fire coming at your face and you just have to go for it and close your mouth around the torch.”

Though the idea of a lit torch to the face may frighten some people, Selch loves the adrenaline and is comfortable with fire. She believes injuries are easily avoidable when playing with fire. If something is on fire and the person holding it becomes uncomfortable, Selch would advise them to just drop it and let it go.

Selch tries to do fire tricks as often as she can. She loves the community of people who also play with fire getting together to teach each other new tricks.

“It becomes a really cool community of people who like to learn new things with dangerous things—that people think are really dangerous,” Selch said. “We’re super open to helping teach people if they’re interested in learning.”

Daryn Hurst, a Muncie resident, started experimenting with fire four years ago. After spinning fire almost every day, he now eats fire, spins poi, is handy with the staff and is currently learning how to juggle fire. He’s done shows at places such as Indy Scream Park and local bars.

“I’m really just working on being a jack of all trades,” Hurst said.

Hurst enjoys being an adult and still being able to play with fire – responsibly of course. Though he’s gotten injuries and burns, Hurst said the key to learning how to successfully play with fire is to “try and try again.”

On Monday nights, the fire community gets together at Be Here Now for what they call Spunday Monday. Flow artists come together to show off tricks and play with fire—Spunday Monday is also open to anyone who wants to come watch.

“It would be really cool if a lot more people would come out and watch, and talk to us and get to know us because we love talking about it, we love learning about it and we love teaching people how to do new things,” Selch said.