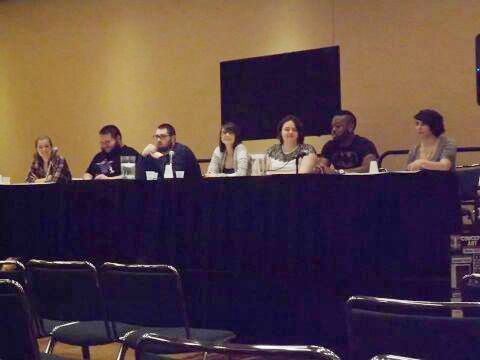 In comics, a superhero’s identity could be known, but not what lies underneath. Fourteen Ball State students tore off the mask and joined Representing Religion in Comics, a special immersion class taught by Associate Professor of Religious Studies Jeffrey Brackett.

Tyrece Love, a junior religious studies major, said he enjoys the class because of a diverse representation of majors including biology and photojournalism. Most of the students didn’t know much about comics before taking the class, but are now learning about and enjoying comics, said Love.

Love said the class gives students an opportunity to view life from another person’s perspective. It shows students how to accept differences in both religion and culture.

“Being able to collaborate with other students who are just as passionate and dedicated to their work as you are is a great feeling,” Love said. “It is very motivating and inspiring.”

The class also attended Indianapolis Comic Con on Sunday, March 15 as panel speakers for the class.

Aw Yeah Comics in downtown Muncie gave students the opportunity to participate in an Indianapolis Comic Con panel that talked about their class. Indy-Con contacted Christina Blanch, co-owner of Aw Yeah Comics in search of panels to present at the event. Blanch contacted Brackett, and asked him if he would be interested in presenting a panel along with the students. Brackett agreed and led the panel.

Approximately 20-30 people listened to the panel as the students talked about their classroom experiences. The students then answered questions from the audience about the class.

Daniel Hodson, a junior creative writing major and student in the class said he appreciated the opportunity to speak about the class and how they research religion within comics. Being at Indy-Con surrounded by his interests and talking about these interests with others made the event memorable for him.

Love said being surrounded by so many people with a shared interest showed him that comics are not just for kids.

“I enjoyed being able to prove to people that those of us from different backgrounds can still learn how to set aside our differences and coexist as one,” he said.

Students in the immersive learning program will be creating their own comics and compiling them into an e-book that will be available for download. Aw Yeah Comics will be bringing in comic book creators to help the students with their own comics.

Love created a comic about a hip-hop artist struggling with his faith in God after experiencing some tough life events. Love focused on hip-hop because of the negative stereotypes tied to the genre and how religion can bring about negative opinions. Love said he hopes to offer people another perspective on how hip-hop and religion can both be used to uplift people.

“I want people to understand that although religion has had its faults, there is still something positive that can come from religion in a society,” he said.