The discussion will include two sessions on March 31: 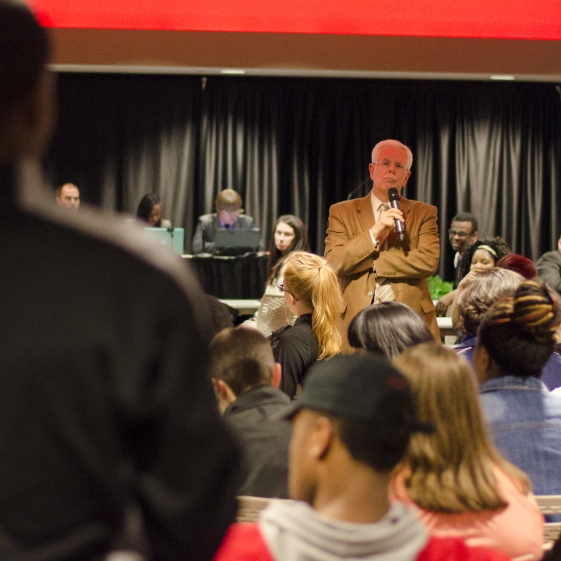 President Paul Ferguson, along with Kay Bales, vice president for student affairs and dean of students, sent an email to students Wednesday about the controversy with the John R. Emens Outstanding Senior Award. They announced there will be a workshop next Tuesday, March 31, in L.A. Pittenger Student Center Rooms 301-301 from 5-6:30 p.m. and 7-8:30 p.m. DN PHOTO BREANNA DAUGHERTY

In response to criticism from students last week, Ball State announced a platform for discussion about diversity and inclusion today in an email from the Office of Student Affairs.

At 5 p.m. Tuesday in L.A. Pittenger Student Center Rooms 301 and 302, students will have an opportunity to "share their concerns related to diversity and inclusivity issues" during the Beneficence Dialogue. A second session will take place at 7 p.m. in the Student Center Ballroom.

“I’m excited that this conversation is taking place on campus," she said. "I think it will benefit the university.”

Following the two discussions, "Hope & Healing at Benny" will begin at 9 p.m. near the Beneficence Statue. According to an email from the university, the meeting at the statue will be "to reflect and to unite in our commitment to civility, courtesy, and compassion."

Interim Associate Vice President for Marketing and Communications Joan Todd said on Friday afternoon the format of the discussion and decisions regarding who will speak have not been finalized.

Following the announcement of the recipient of the John R. Emens Outstanding Senior Award last week, an email sent by student leaders to President Paul Ferguson was the catalyst for a campus-wide email sent Wednesday, addressing the selection of this year’s Emens Award winner.

“We are listening to the conversation and engaging with students on the issue surrounding the selection of the John R. Emens Outstanding Senior Award. ... We do understand this year's selection has sparked important conversations beyond simply this year's recipient,” Ferguson and Bales said in their joint statement.

By Derran Cobb / 29 minutes ago