Record store owner shares his addiction of music with community 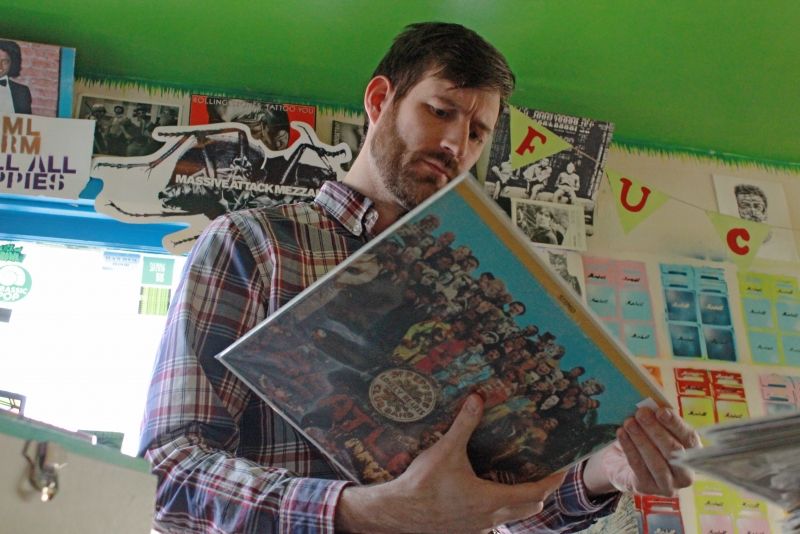 Travis Harvey examines "Sgt. Pepper's Lonely Hearts Club Band" by the Beatles. Harvey calls the record one of the most influential albums of his early life. DN PHOTO ALISON CARROLL

As a part-time employee at Village Green Records in 2007, 24-year-old Travis Harvey didn’t have input in the decisions of a failing business.

Harvey said sales had plummeted under new management, and the majority of the record store’s clientele disappeared just six months after Jared Cheek, the original owner, sold the store and moved to Bloomington, Ind.

“‘I can’t let you do this to the store,’” Harvey recalled saying. “‘It means too much to me. This community needs a record store. If you’re not going to do it right, someone else needs to do this.’”

Almost eight years have passed since Harvey bought Village Green Records for $8,000, and besides the location — on the corner of North Martin Street and West Ashland Avenue — it’s unrecognizable.

In an attempt to resurrect VGR’s image, Harvey repainted, refurbished and redesigned the entire store.

He chose the color scheme outside — dark green walls and an entrance ramp displaying every color on the spectrum — with the intent of luring curious passersby.

He renovated the interior to accommodate possible in-store concerts, and had portraits painted of Anne Frank and a small child playing a violin to decorate the walls.

Through all the change, two things remained the same: the store’s philosophy of “trying to expose people to new music at an affordable price” and Harvey’s insistence on making VGR’s attic his home.

"With a Little Help from My Friends"

Following his graduation from Ball State with a Bachelors of Fine Arts in Graphic Design in May of 2005, Harvey moved to Chicago in hope of gaining employment at a design firm.

He searched for nine months with little success.

“I really wasn’t finding too many real promising opportunities,” Harvey said. “I’d go to an interview and they’d find out [I was] a lot more artsy than the type of stuff they’re doing ... I kept finding myself getting in situations where I was qualified and everything, but [my style didn’t match].”

Unable to find a job where he could express himself, Harvey returned to Muncie, accepting an offer from Ball State to serve as the art director of a $500,000 educational film series.

While producing the documentary, which earned a Regional Emmy Award Nomination from The National Academy of Television Arts & Sciences, Harvey began working and living at VGR.

“I needed a place to stay. Lo and behold, my buddy Jared [Cheek] has this opportunity to live in [Village Green Records] … it turned out to be a perfect match, almost too good to be true,” he said.

The fit appeared natural, and as the film project concluded, Harvey spent more time learning the ins and outs of the record business.

He never thought he’d have the opportunity to run the store his way, but when the chance arose it felt like destiny.

“I’m very familiar that Muncie is a very depressed community; it's gone through a lot of economic problems," he said. "I thought, ‘this is my opportunity of doing something I should do. Who could be better than me to do this?’ … I believe in music and offering it to people in the soul of what it is.”

"Within You Without You"

Harvey’s relationship with music began at a young age.

“I was 10 years old and searching for something spiritual. I wasn’t finding anything soulful in religion, and I found it instead in artistic expression.”

“It’s not just the sensation of listening to music and what it’s giving to me, it’s more like the sensation of constantly needing more of it,” he said. “Those qualities seemed to add up to an addiction, not love … I am constantly out in search of fulfilling that hunger of hearing music. I feel like I’m getting behind. I get anxiety like I need my fix.”

Real drugs don’t interest Harvey. He said some people encourage him to get high and listen to certain songs, but he prefers the sense of momentary completion he experiences after soberly stumbling across a mind-blowing track.

Harvey watches from behind the front counter, as a young man and woman browse through his hand-picked selection of vinyl and CDs.

Seeing nothing that interests them, the couple make for the exit within minutes of entering the store.

“Is there anything you’re looking for?” Harvey asks as they near the counter. “Anything I can show you?”

The couple shake their heads, mutter “no” and disappear.

“For the longest time, that was the most common reaction I would get when people walked in here,” Harvey said.

He’s become accustomed to interactions like these with potential customers. It’s a risk he willingly takes by choosing to offer largely obscure titles.

While popular albums from bands, artists and groups like Led Zeppelin, Bob Marley and Wu Tang Clan maintain their places on the store’s shelves, Harvey’s number one mission remains exposing his customers to new music.

“I’d rather someone be able to say a year from now, ‘I bought this record, now this album has blown my mind, changed something in me … and I found that record at the Village Green Record store,” he said. “I would rather be that part of [someone’s] listening experience.”

John Phallon, who began working as a part-time employee at VGR in August of 2014, sees the joy Harvey gets when he sells a customer on his recommendation.

“I think what makes Travis the happiest is when he gives [music] to somebody that they didn’t know about,” Phallon said. “I think that helps him be happier … he’s going to live that forever.”

While Harvey doesn’t have current plans of closing VGR, he hasn’t ruled out relocating.

“Logically, there is going to come a time I’m going to leave,” he said.

Boston remains a possible destination, as the city offers an abundance of jobs in the field of psychology — his girlfriend’s area of expertise.

Wherever he is living, Harvey plans to continue spreading new music. He recently finished compiling his  Top 100 albums of 2014 and is almost a third of the way through his Alphabet-mixes on Bandcamp, an online music store.

It all goes hand-in-hand with his philosophy.