To fund the project, visit http://www.gofundme.com/facingdepression

All donors’ names will be included in the book 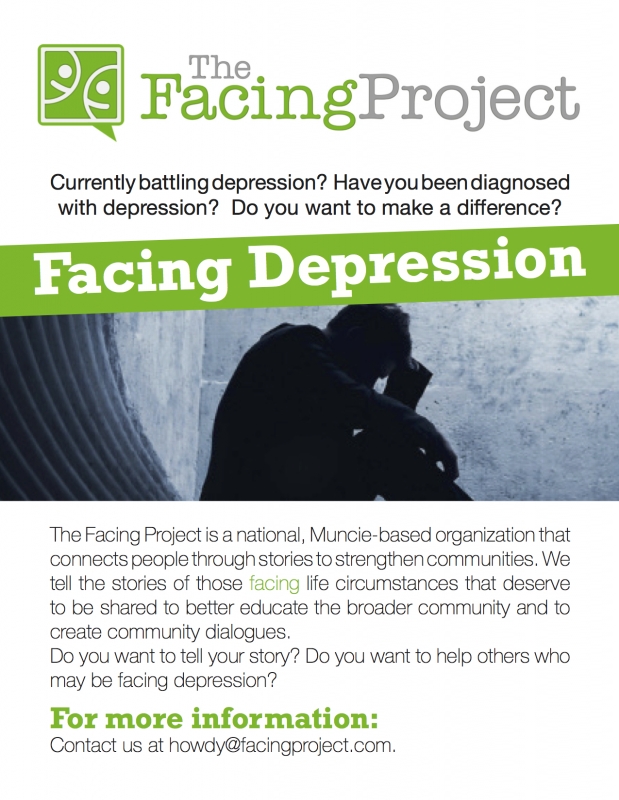 Adam Kuban, an assistant professor of journalism, sees this as a problem. Those suffering from mental illnesses like depression can take this lack of help from others as not caring. Kuban admits to not always being observant of mental illness issues.

Kuban is working with 14 students in the Ingelhart Scholars Program to create a book about facing depression. The Ingelhart Program is a two-semester curriculum for journalism students to explore leadership. The first semester is based on exploration, and the second is spent on application. This means the scholars learn about what leadership means, then put what they learn to use in a real-world setting.

“I want there to be, in the second semester, some greater good that comes out of the program,” Kuban said.

This year, the Ingelhart program teamed up with The Facing Project. Founded by Kelsey Timmerman and J.R. Jamison, The Facing Project aims to tell communities’ stories through writers and storytellers. The Facing Project has covered issues from addiction to autism to poverty. The program started in Muncie and has spread out across the United States.

Timmerman got the idea for The Facing Project from research he did for his book “Where am I Wearing?” He looked at the communities mentioned in his book and saw how strong all of the neighbors were in times of need. He looked at himself and realized that he could be doing more. He wanted to tell other people’s stories.

Kuban believes the students in the Ingelhart Program chose depression as their topic because “some of them have direct experience with the topic,” either with themselves or someone close to them.

One writer involved in the project is Nathan DeYoung, a freshman telecommunication news and meteorology climatology major.

“Depression is not one of those topics that is regularly talked about,” DeYoung said. “Let’s be honest, it’s something people try to avoid. The Facing Project was founded on those ideas of telling stories on topics that related to that.”

To find the storytellers, Ingelhart scholars looked to community donors and sponsors. They reached out to Mental Health of America and local offices that help people suffering from depression and anxiety. The results from these outlets, however, were not what the program was hoping for, so they turned to social media to draw in storytellers.

The writers for The Facing Project write the stories in first person. This requires them to connect deeply with their storytellers.

A typical meeting between a storyteller and a writer lasts around an hour and a half. DeYoung said the writers started out connecting with their storytellers on a personal basis before diving into the interviews.

“Ultimately, it’s about the storyteller,” DeYoung said. “It’s not about the writer.”

The program offers two different tracks: the writing track and the promotions track.

Emily Brungard, a freshman advertising major, is involved with the promotions track. Her job entails maintaining social media updates, sending out press releases and anything else that relates to promoting the project.

Though Brungard does not work personally with the storytellers, she has “heard some amazing stories” from those who do.

“[Depression] is a topic that really has no barriers,” Brungard said. “Whether you’re a college student or not, no matter your race, ethnicity, socioeconomic status — depression doesn’t pick and choose who it affects.”

Timmerman has worked with the program scholars during the writing process. After reading the stories, he feels more educated on the topic of depression.

“In 10 years of teaching, I honestly don’t know if I’ve seen such commitment and enthusiasm toward a common goal, and I hope we can sustain it,” Kuban said.

The stories included in the facing depression project will be read in monologue style at 7 p.m. April 23 at the Muncie Civic Theatre. The event is free and open to the public.