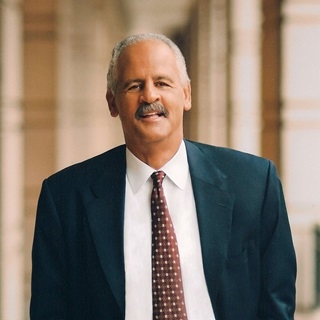 Stedman Graham was the keynote speaker for Black History Month with the presentation 'I Read. I Rise. A tribute to Maya Angelou'. Graham spoke at the Student Center. PHOTO COURTESY OF BALL STATE

Graham, Ball State alumnus and partner to Oprah Winfrey, visited Ball State to share his stories about Maya Angelou as well as his own identity during an event held in honor of Angelou’s life.

"I know no one better than [Graham] to talk about what her contribution meant to society and what her life lessons meant for us," said Charlene Alexander, associate provost for diversity.

The Office of Diversity sponsored the event.

After Alexander spoke, the event opened with a brief video depicting Angelou explaining her relationship to God and human beings.

An all-student performance group, Artistic Outreach Voice choir, performed several of Angelou’s poems including, “I Know Why the Caged Bird Sings” and “Still I Rise.”

Angela Jackson-Brown, judge from the "I Read, I Rise" Poetry Slam and English professor, introduced the three poetry slam winners.

“Before I saw ‘I Know Why the Caged Bird Sings’ and saw Maya Angelou’s face on the back of the book, I never thought I could write. I didn’t think black people wrote books,” said Jackson-Brown. “I wrote myself out of bad relationships and unfulfilling jobs because of Maya Angelou’s work.”

The final performance was a gospel choir singing an African spiritual, “Ride on King Jesus,” which was introduced by Multicultural Center Director Ro-Anne Royer-Engle.

When Graham was introduced to speak, he stayed away from the large stage where all of the performances had taken place.

“I was with [Angelou] with Oprah the week before her death, and I had the pleasure of visiting her many times before then," he said.

Graham recalled hearing her phone conversations with Winfrey some evenings when she would call Angelou for guidance.

He said Angelou's teachings on rising up helped him learn about himself, developing an identity and using that identity to reach people through love.

Graham expressed his own struggles with his identity for 32 years and said he felt his skin color made him less important than other people.

“I realized that we were all equal, because everyone has 24 hours. And most of the time we spend that 24 hours on the most powerful tool on the face of the earth, [a phone], doing nothing,” said Graham.

After being vulnerable to the crowd, Graham added levity to the speech while making a point on self-definition.

“You all define me by my relationship with Oprah," he said. "Y’all are like, ‘Who’s coming to speak?’ ‘Oprah’s man.’ Don’t even deny you said it. I know y’all said it. Well, I tell you what, I don’t give you all the power to define me. I define me."

Graham also challenged the audience to find their desires and use them to create an identity for themselves that will be successful.

"Find information to make your profession relevant to things you love, and you can’t go wrong, because it’s all love," he said.

June 23, 2022, marks the 50th anniversary of Title IX, a federal civil rights law passed in the Education Amendments of 1972. Title IX prohibits sex-based discrimination in any school or educational program that is given funding by the government. In the world of athletics, Title IX helped give female athletes equal opportunity in all educational-based athletics.