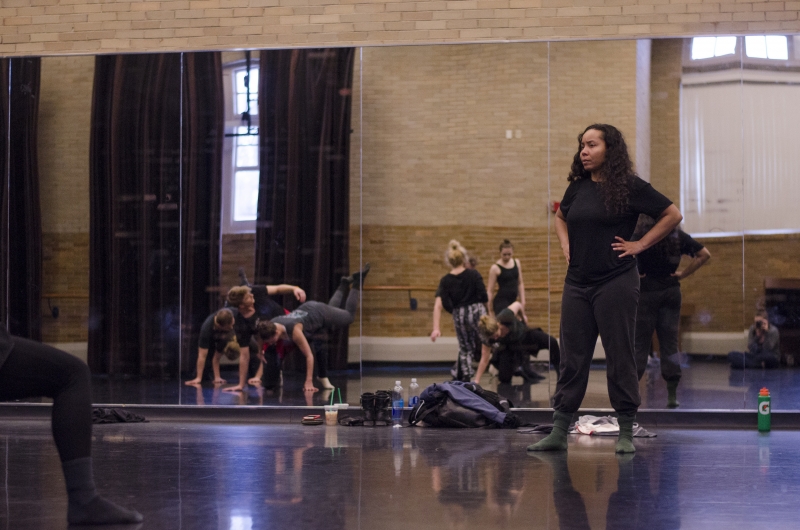 Sidra Bell is an internationally renowned artistic director that is at Ball State choreographing as a guest artist until Spring Break. The work she is producing with Ball State dance theatre students is one of her own creations. DN PHOTO BREANNA DAUGHERTY

She has a bachelor’s degree in history from Yale University, a master’s degree in choreography from Purchase College Conservatory of Dance, is an adjunct professor at Barnard College in New York City and has worked with Juilliard. Now she’s at a different university: Ball State.

Bell arrived last week and will finish her choreography before Spring Break.

Assistant professor of dance Audra Sokol said most guest artists only stay for a few days.

“The fact that we have her here for two weeks now is much more immersive than the traditional guest artists they bring here,” said Tyler Hartman, a senior dance major.

The work that Bell has been choreographing with Ball State is her own creation.  The students will be showcasing the choreography at the Ball State Dance Theatre concert.

Bell has produced over 100 original works.

“I’ve been asking them to think more independently in collaboration with me to choreograph the piece…they are allowed to give their input and they’ve been really open to me,” said Bell.

“She leaves the movement up to the dancer’s interpretation, and lets you figure out your own style,” said Meier.

During a Monday practice, Bell's style of choreography shone through even while she stood back and watched.

While rhythm and timing were uniform throughout the class, no two students danced the same way. The soundtrack playing wasn't music as much as it was sounds that matched the work's originality.

Bell said that she loves working with a college age group and being a part of that time in a dancer’s career.

“In universities, that’s the place where you should be researching and challenging yourself to go beyond the form and go deeper into the craft," she said.

Bell’s unique approach to choreography is one thing that sets her apart, said junior dance major Mollie Craun. Bell’s style is more improvisational than what the typical dance major is used to.

“[Her choreography] Is very relaxed instead of super structured…it feels a little more free on my body,” said Craun.

“[Her class] is just continuous movement all the time, and it helps the individual question what they’re doing and constantly has your mind thinking, because the way she works, she never stops talking and it helps your mind constantly stay engaged and focused on what you’re doing,” said senior dance major Halie Gordon.

Bell said she develops material for the dancers that she thinks is relevant to professional life. She calls her process unique and collaborative.

And that process is still evolving.

“I don’t think as an artist you want to get to that pinnacle place within your process,” she said. “A lot of it came from self-research, because for me choreographing is still the act of knowing myself as a moving artist, self-exploration.”

The students of the Ball State Dance department feel lucky to have her at Ball State even if the visit is only two weeks.

“I definitely feel thankful that she’s here. This isn’t an opportunity that you get every day,” said Meier.