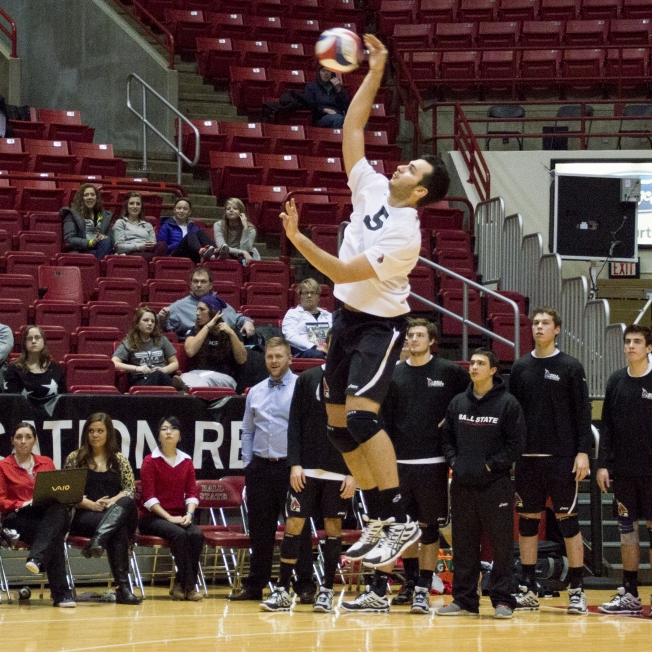 Sophomore outside attacker Edgardo Cartagena serves the ball during the game against Lewis on Feb. 12 at Worthen Arena. DN PHOTO ALAINA JAYE HALSEY

After coming to the United States to fulfill a dream of playing volleyball at the Division I level, Edgardo Cartagena’s career was in question after the university he attended decided to disband its men’s volleyball team.

Originally from Gurabo, Puerto Rico, Cartagena came to the University of Pacific in Stockton, Calif. in 2013 to play for the Tigers. After redshirting during his first year, he received word of the program’s possible elimination.

"We were told in the fall semester that the program might be cut," Cartagena said. "It was tough going into the season, and we were all struggling through the process."

As quickly as his dream came true at Pacific, it seemed it was just as quickly coming to an end. Cartegena said it was difficult to play because everyone on the team was worried about their future.

Former Pacific men's volleyball coach, Joe Wortmann, helped all of his players through the process of finding a new school. Ball State head coach Joel Walton, a close friend of Wortmann's, became interested in the 6-foot-5 outside attacker.

"Once we found out that Pacific's program was going away, we took a look at their roster," Walton said. "The coach said that Cartagena was someone we should look at; someone with his ability and height was someone we were interested in joining our team."

Cartagena's success in Puerto Rico sparked interest for his playing services. He won multiple tournament Most Valuable Player awards for the Puerto Rican Youth National Team, and led the team to a silver medal at the Pan-American Cup and a World Championship appearance. He was also a two-time captain for his high school team.

Despite interest from multiple schools, Cartagena ultimately thought he would stay in California and attend Long Beach State.

But after visiting Ball State in the fall, it was an easy decision for him.

"I really liked the group of guys, I liked the atmosphere and the support for men's volleyball was unreal," Cartagena said. "It was a no-brainer for me."

Walton expected Cartagena to make an immediate impact with the Cardinals, and said he has done that. Coming off the bench, Cartagena has seen action in 14 sets, racking up 20 kills, seven digs and six blocks.

Providing a spark will be key if Ball State is to snap its losing streak and climb back into the Midwestern Intercollegiate Volleyball Association standings.

Cartagena will look to outlast five of his former Pacific teammates in Ball State's next match against No. 12 Ohio State.

At the end of the 2014 season, the University of Pacific disbanded its men's volleyball program in order to maximize funding for a new athletic initiative. 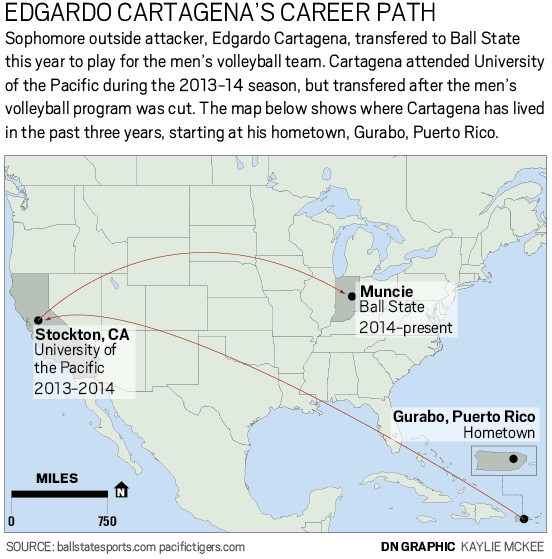 It was up to the third-string running back, redshirt junior Tye Evans to fill the void. He did just that, as he ran for 108 yards on 25 attempts in Ball State’s 27-24 victory over the Rockets.

By Connor Smith / 2 days ago

The Cardinals hung on and defeated the Rockets, 27-24, securing their first win at the Glass Bowl since 2012.