"I feel like the only appropriate reaction to this piece is to stand up and shout 'Yes!'"- GreenGrasses

"Thanks so much for this. It's so difficult to let myself believe this, as a young woman clinging to her 'just-south-of-plus-size-if-only-the-damn-companies-won't-stop-changing-the-sizes-on-me' status, and yet I still feel enormous, invisible, and ignored." - Danielle B.

"This is now my required reading every morning." - bluestgirlblog 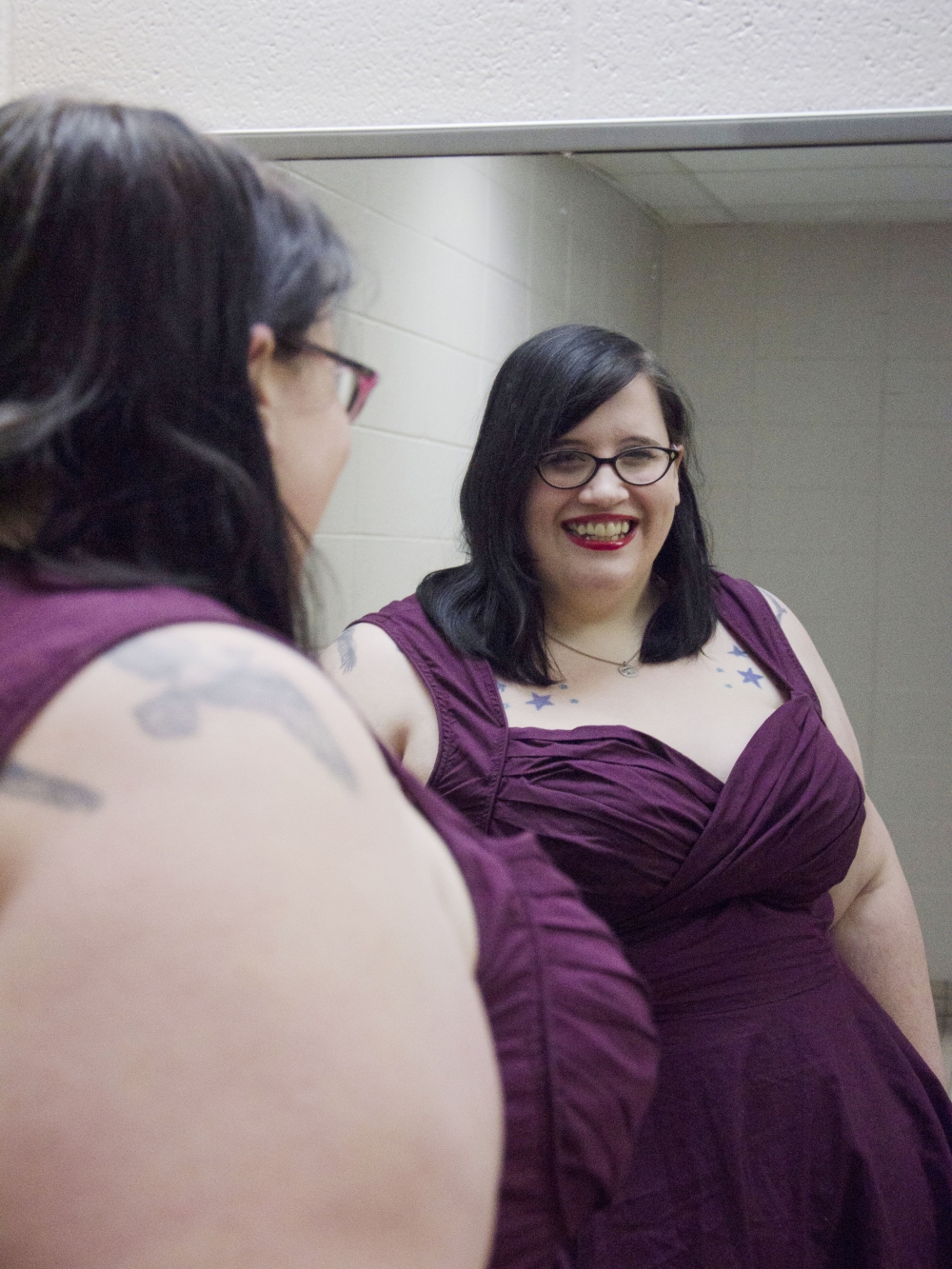 Sarah Hollowell, a senior creative writing major, wanted to take the body-positivity moment a step further by talking about her sexual experiences as an overweight woman. DN PHOTO BREANNA DAUGHERTY

Sarah Hollowell, a senior creative writing major, listened as Meghan Trainor belted “All About That Bass.” Hollowell watched as women like size 22 model Tess Holliday embraced their full figures through Instagram and Twitter.

But Hollowell wanted to take it a step further. So she wrote an article.

“This is an Essay about a Fat Woman being Loved and Getting Laid” appeared on the online publication website, The Toast last Monday. The piece currently has more than 3,000 shares on Facebook and other social media outlets.

In her piece, she’s candid.

“I’m 5 foot 3 inches and somewhere north of 300 pounds, though I couldn't tell you exactly where,” she said.

Hollowell gets graphic too because, well, she can.

Hollowell said she wanted to tackle the idea that fat women, and fat bodies of any gender, are desirable.

“I was told in high school, ‘Oh, you’ll never get a boyfriend,’ and I just wanted to prove that isn't true based on my own experiences and the experiences of others,” she said.

Esther Wolfe, a close friend of Hollowell and a senior English literature major, said they both tend to use the phrase “fat positivity” instead of “body positivity” to stray from the limitations associated with the latter.

“So there’s definitely a threshold of acceptance within the mainstream body positivity movement. You don’t see it embracing women who look like Sarah,” Wolfe said.

Hollowell had written about her size before her article in The Toast.

In it, Hollowell talks about her life in a world built for skinny or average sized people. She wrote her latest article because she wanted to create a more positive piece.

So far, she’s loved the reactions.

She said she’s received several emails of people sharing their stories with her, some thanking her because her essay gave them the hope and the courage to start dating again.

One young man wrote to her to say that before reading her essay, he’d felt broken. Reading it made him feel like he could live again.

“I never really expected my essay to get such an overwhelmingly positive reaction,” she said. “I mean, when you hear you’re getting published you think, ‘I’m going to be the next J.K. Rowling,’ but you never really expect it to get so big as just a random college student.”

In the future, Sarah said she wants to write about more issues such as her journey as a victim of sexual assault and the limitations of body positivity.

Hollowell would like her next works to represent not only her own experiences, but those to which everyone can relate, she said.

“People have said, ‘That [essay] is a good representation of her and her journey,’ but that it didn’t represent them,” she said. “I’m an able-bodied white woman, and I really hope we hear similar stories about people who are disabled and of different races, and of other sexualities than just my heterosexual experiences,” Hollowell said.

Hollowell, who identifies as bisexual, said she struggled with focusing her article on her heterosexual experiences, but that she had only had experiences with men at the time of writing it.

“I’m just one voice,” she said. “And I just want everyone to be happy.”

By Associated Press / 22 hours ago