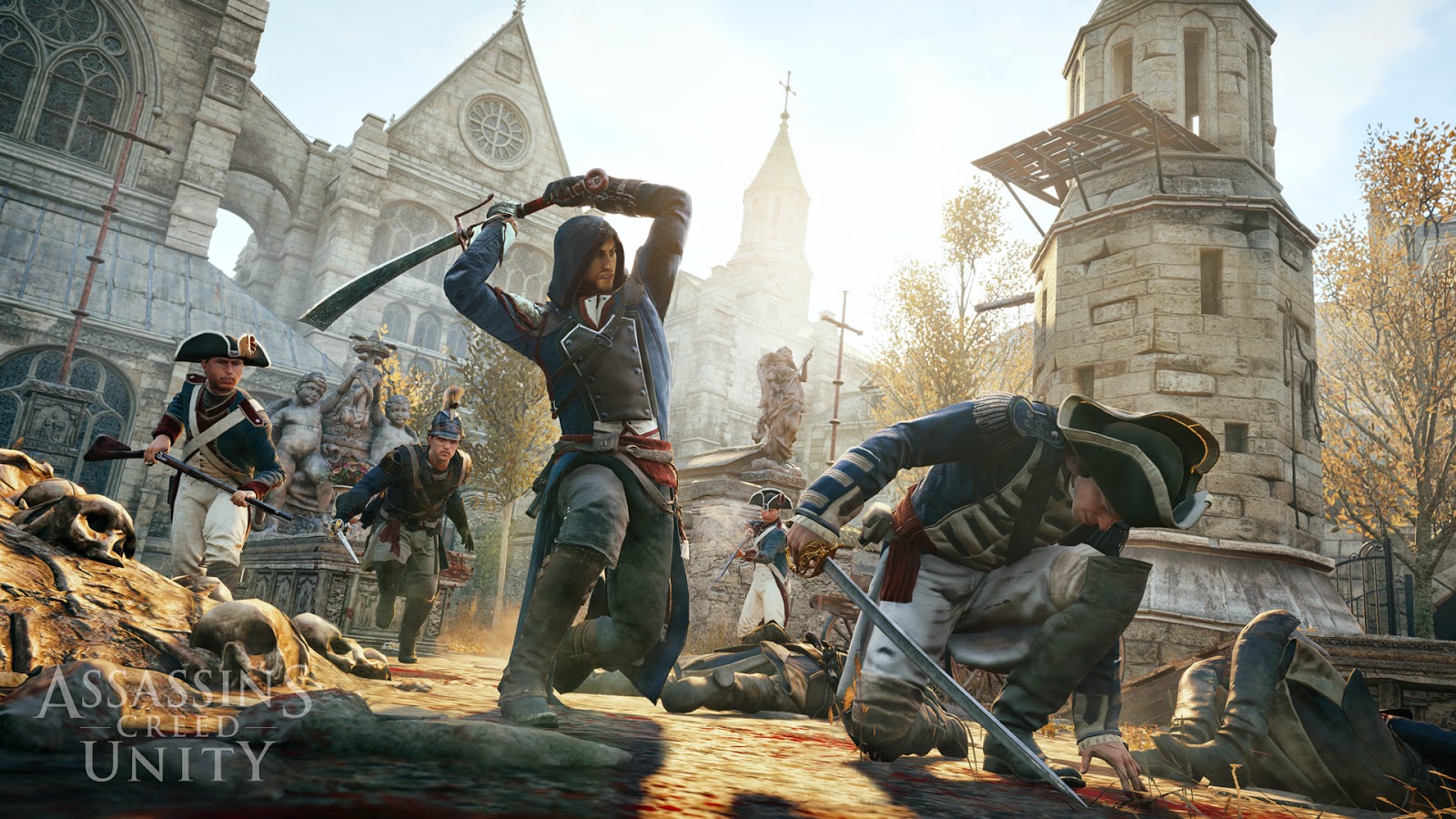 Assassin’s Creed: Unity is a lot like a cool car with a janked up engine. From the outside it looks great and will leave you wanting more, but after a short drive you won’t want to be behind the wheel much longer. Traversing through an old-world city has never been more beautiful than it is in Unity, and a number of new gameplay mechanics stand out in a strong way. Unfortunately, some overwhelming issues ruin what easily could have been the best new-gen experience to date.

You step into the boots Arno Dorian during the French Revolution. Distant echoes of cannon fire and musket shots fill the air, and disdain for those with wealth is commonly mentioned. Moving through chaotic mobs of revolting citizens is well realized and establishes a persistent feeling of societal upheaval. As effective as this is in creating a living France, Arno’s story among all this seems contrived and rushed, with little to no motivation guiding his choices and actions. The result is a storyline that leaves you confused more often than not.

The crucial events of Arno's development were weak and hurt the story's authenticity. Several relationships and deaths should have been fleshed out more, but because they weren't a majority of significant plot points felt forced and underdeveloped. The mid-game climax was an exciting highpoint, even well surpassing the conclusion's easy fight. In this way, the detailed world surrounding Arno dwarfs his story. 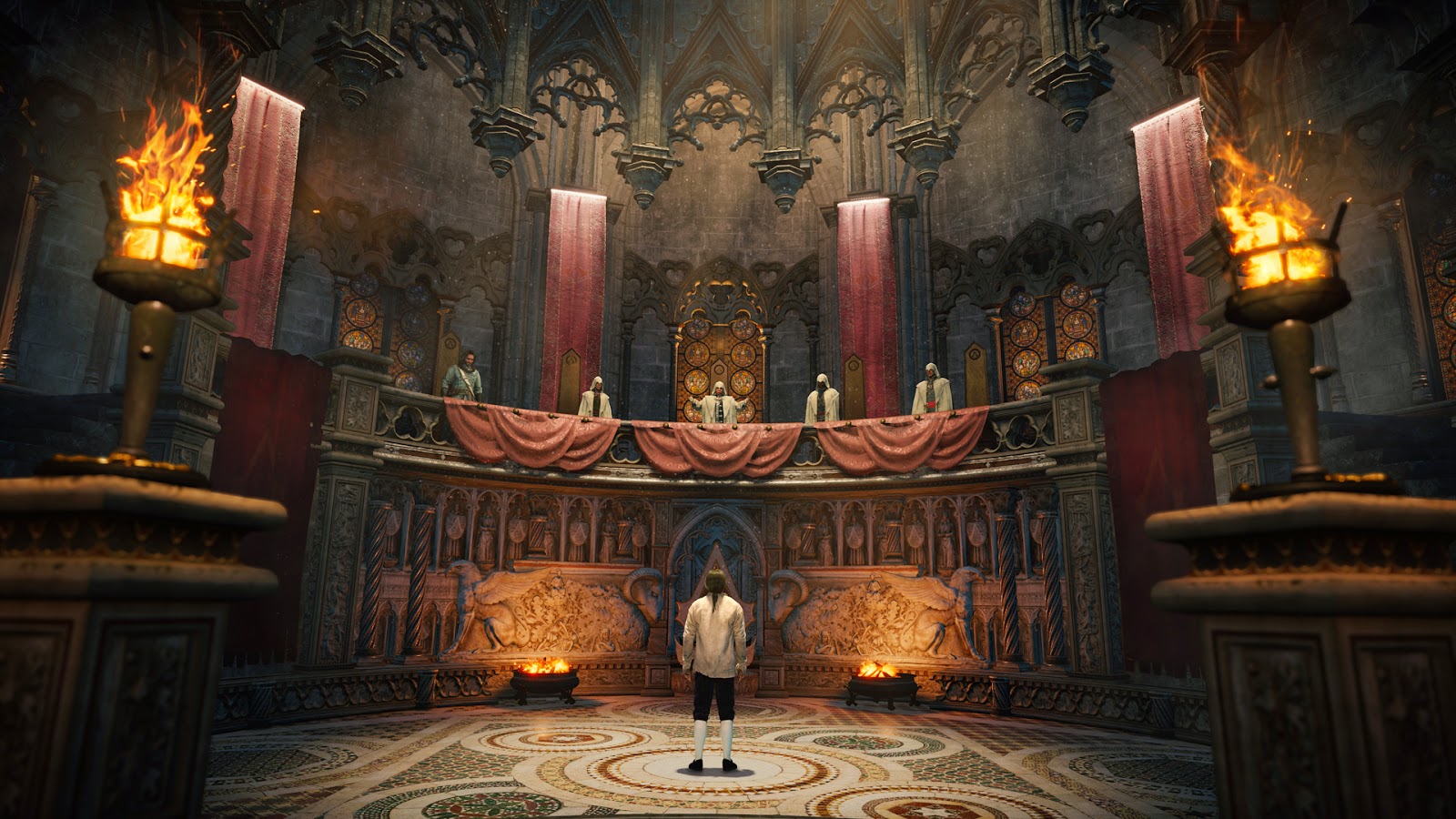 Even after a lengthy playthrough, I’m still awestruck by the sheer beauty of this virtual France. Running at a dead sprint across rooftops, leaping through windows, climbing cathedrals, and pushing through crowds is exhilarating. Much of the world is populated by vast amounts of NPCs, sometimes numbering in the thousands. More than once you’ll encounter spectacular reenactments of the revolution in this dynamic world.

The parkour gameplay is more refined than it’s ever been. There are far less instances of accidentally falling to your death, and the animations are more fluid and believable. Even so, there were still instances where I’d get caught on knee-high objects or would be unable to leap to a ledge that was obviously within reach. The most notable addition to traversal is the openness of the environment. Most buildings are accessible through open windows and doors. This adds more options in how you escape pursuers and sneak around dangerous areas.

Just as the citizens of France feel very much alive, so do the denizens of enemies. Rather than waiting for Arno to dispatch them one by one, they’ll openly attack him at any chance. The insta-kill counter has been removed, making each fight feel more like a strategic fencing match, forcing you to constantly change and adapt to your enemies tactics.Taking on a crowd of enemies is actually challenging, as you can be overwhelmed by more than five individuals, but it makes every success all the more satisfying. 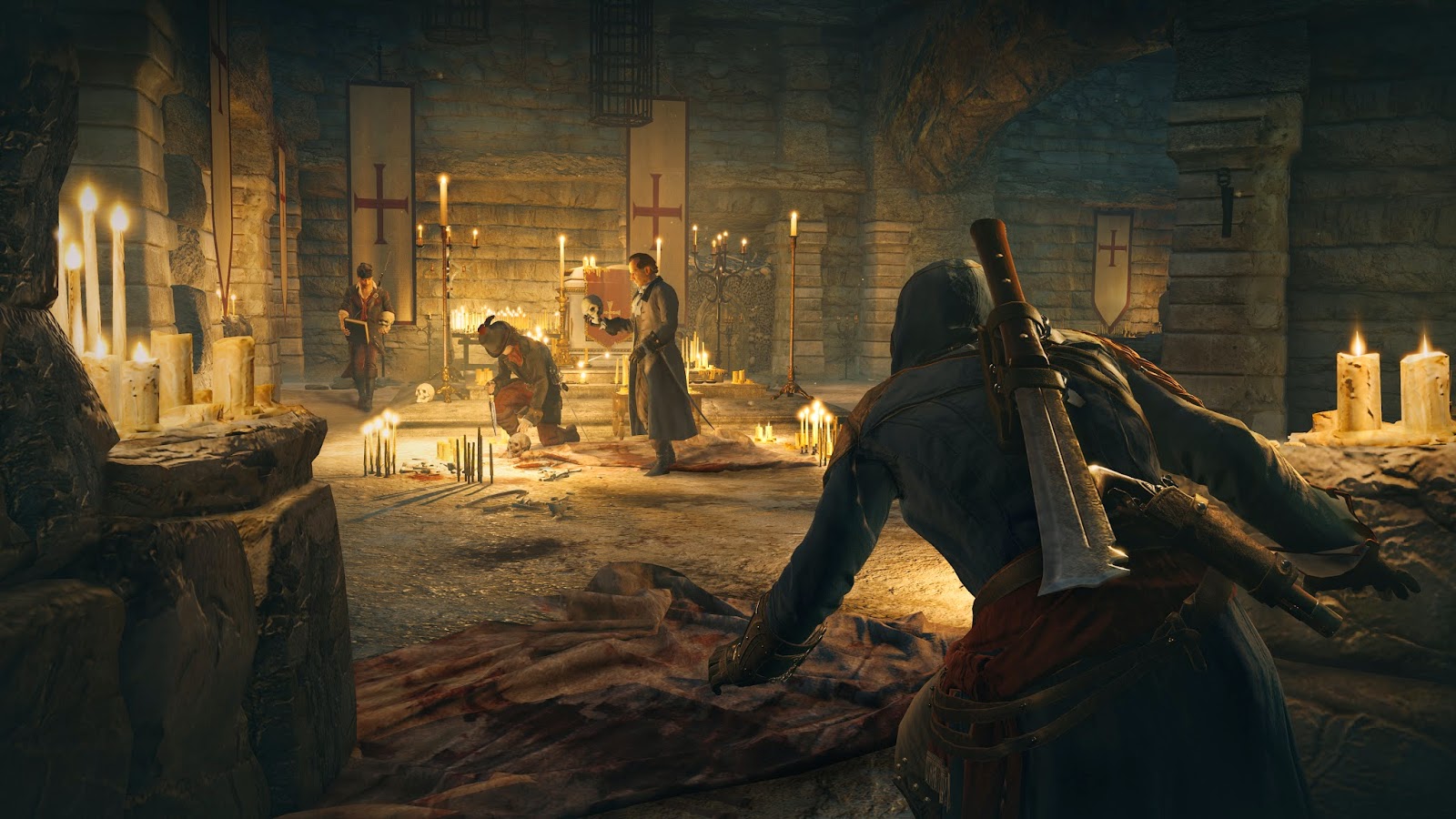 The vast majority of missions are nothing more than finding a target, killing them, and then escaping. But the manner in how this is achieved is entirely up to you. There’s a renewed focus on stealth and this focus is most apparent thanks to the ability to manually crouch. I’m not sure why it took eight games in a series about assassins to implement a crouch button, but being able to sneak through rooms while kneeling behind couches and tables makes the life of an assassin much easier.

Unfortunately, all of these experiences are plagued by bugs and glitches that occur far too often. Characters clip in and out of each other during gameplay and cutscenes, the frame rate drops regularly, and twice I had to restart the game because it froze. On numerous occasions I would unnecessarily die because I either fell through the ground into an abyss, or because Arno wouldn't respond to my commands. These issues were so prevalent that I was never able to properly enjoy the game for more than a few moments at a time.

The highlight of Unity though is its co-operative multiplayer where you and three others work together to complete missions. Running along rooftops and taking on overwhelming groups of enemies with teammates feels like a scene from a movie when pulled off correctly, but connection issues often made it take up to five minutes to find a match. 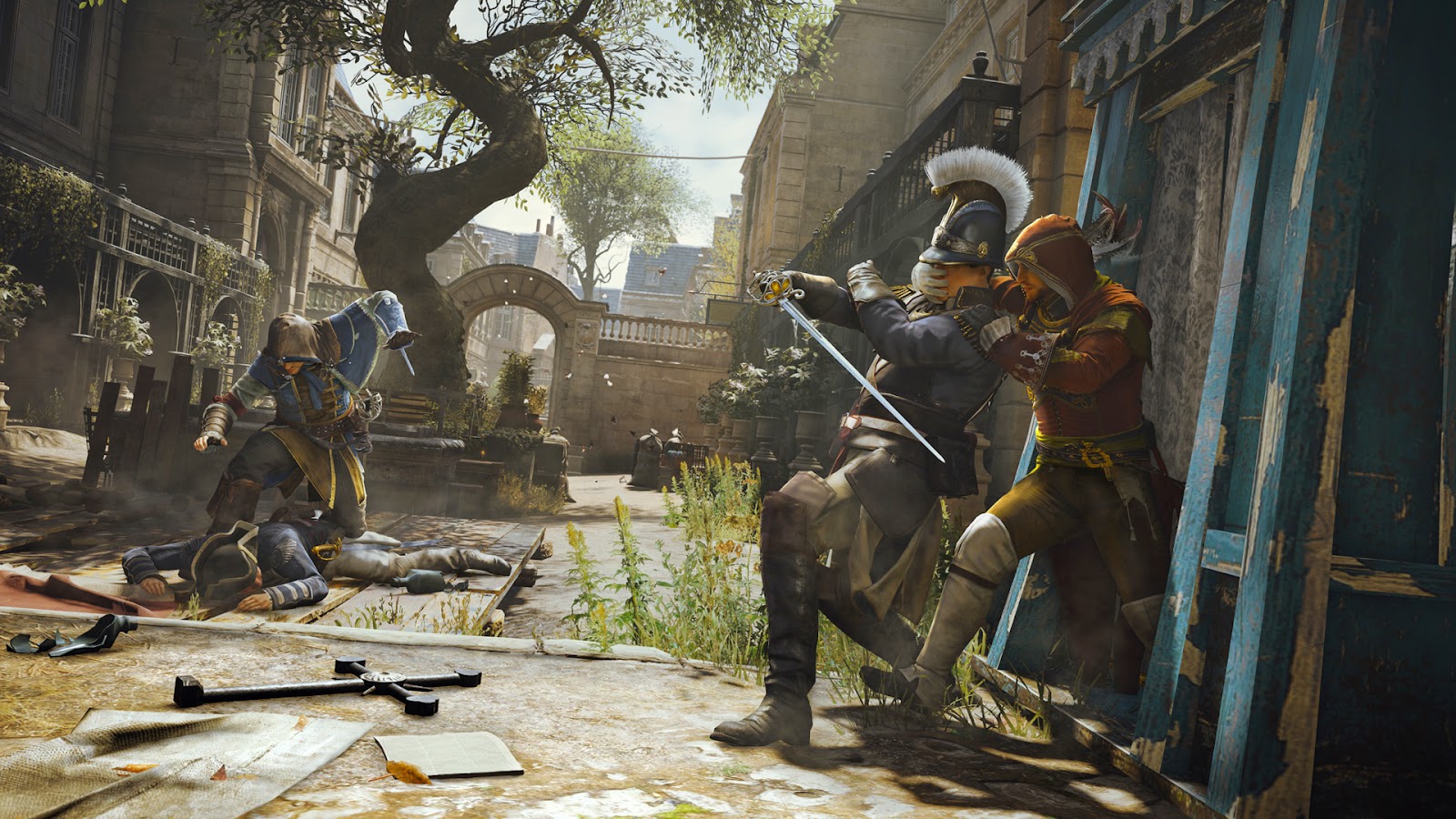 Moderate character customization options add some strategies to online play by letting you alter your preferred stats and weapons. This carries to the offline as well, as you use the same character in both instances. You can change Arno’s outfit from head to toe, with every piece of gear having a direct impact on his stats such as damage, stealth, and speed. This is a nice addition but I often opted for the gear that looked cool rather than the ones that boosted my preferred stats.

Unity’s core dilemma is that it doesn't feel finished. Even though there are many impressive aspects to it, it’s so bogged down by other issues that you can’t enjoy them as much as you should be able to. Yo’ll spend so much of your time aggravated by technical issues and its muddled storyline that you won’t be able to justify completing it. Like an assassin leaping out to a ledge and missing, Unity falls hard while striving for something great. 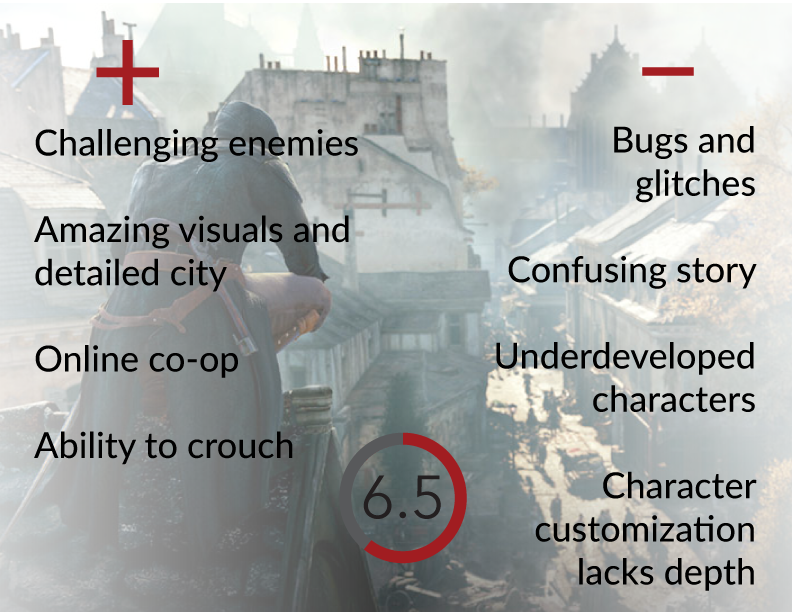