Most people don’t usually watch The View to find out about comics, but that was where Marvel chose to announce that the new Thor would be a woman. This news garnered a wide range of reactions, from outrage to euphoria.

Seemingly endless comments flooded the internet, and some chose to write to the author himself. Jason Aaron has been writing comics for nearly a decade, and he’s been writing Thor for two years. Despite this, many fans believed he and Marvel were doing this just to create controversy and make money.

Some of those fan letters were published in the first issue featuring a female Thor. In response to one man saying he was “considering leaving comics forever,” Aaron responded: “Well, you can dismiss it as an ‘obvious gimmick’ if you like, but as the guy who came up with the idea and who crafted the story, I clearly see it as something quite a bit different.”

Fortunately, local fans were much more enthusiastic about the changes in Marvel, as Aaron found out when he came to Alter Ego Comics in downtown Muncie on Saturday to promote the new Thor and sign his other comics for fans.

The building was packed with people waiting in line, and owners Christy Blanch and Jason Pierce were thrilled. Blanch, a published comic writer herself, is friends with Aaron. “I’m so proud of him for writing this,” she said.

Quinn Hurley, a former intern at Alter Ego, said he trusts Marvel to do this project. “I think this is the greatest thing ever. I was elated when I found out,” he said.

Since only the first issue has been released, not much is known about the new Thor. The old Thor, or the “Odinson,” has been deemed unworthy to wield his famous hammer, Mjolnir. In his stead, someone new picks it up, thus gaining the powers of the god of thunder . Both characters will be in the comics, and will meet in later issues, but they each have their own separate story lines. “It’s not like Batman and Robin,” Aaron said.

Many people were initially confused by this. The Odinson is not changing his gender or disappearing. Aaron is exploring his character in a whole new way by showing the challenges of worthiness and being a god, something that hasn’t been done to this extent before. So why does the new Thor have to be a woman?

“It was just the story I wanted to tell,” Aaron said. “If you look at the supporting cast that’s built up around Thor, most of those supporting characters are female. So, when I knew I wanted to get Thor to the point where he couldn’t pick up his hammer and open the door for somebody else to come along, it seemed natural to have that be a lady. Of course, that change wasn’t made for the sake of making it; we still had to know who was that person that was going to pick up that hammer. What was her story? That’s the thing I am most excited about.”

The new Thor’s costume design looks remarkably similar to the Odinson’s. “We wanted her to look like Thor, not Thor’s back up dancer,” Aaron said. 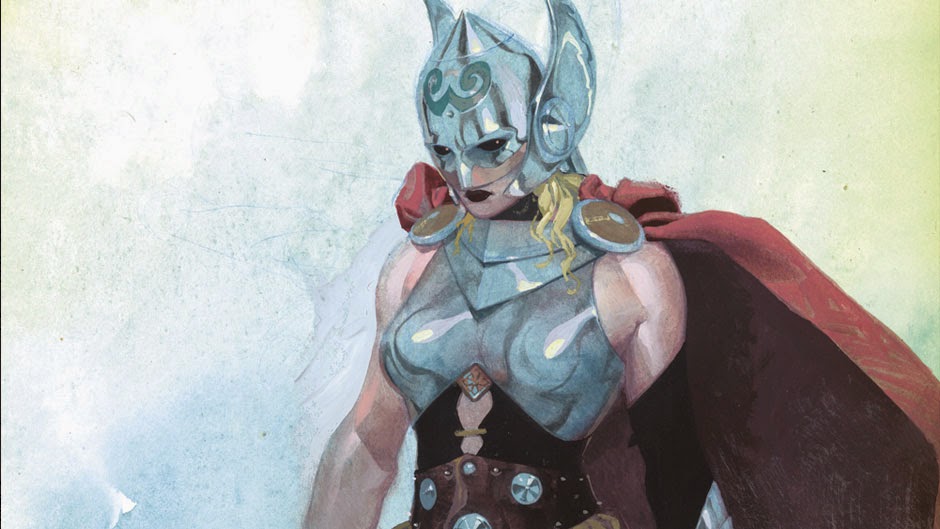 They wanted her to look like the powerful Viking goddess that she is. Thor originated in Norse mythology, and it shows.

Aaron was not pressured into this change by Marvel; in fact, he brought the new story to them.

“Yes, I am for us doing more books with female characters, just like how I’d love to see more female readers and writers doing those books,” Aaron said. “It’s not like I set out to make this change for the sake of making the change without having the story. If I was doing it for the sake of doing it, the story would be very hollow.”

Female comic readers are not a new concept: according to The Atlantic magazine, a Market Research Company Study from 1944 found that 95 percent of boys and 91 percent of girls between ages 6 and 11 read comics. The Atlantic also mentions a Facebook study based on “likes” done by comics blogger and political consultant Brett Schenker that found 41 to 47 percent of fans were female.

Ball State’s Comic Book Club President William Long has been surprised by the comic fan base. “They seem to be easily upset by minor changes, which is frustrating,” he said. “I think that Lady Thor was a great change and a push forward to have more women as strong superhero figures. Other changes happening are also chances to push forward more diversity. Comics should be able to both reflect the world around us and present a better world that we could live in.”

Wherever the new lady Thor takes us, it’s certainly proved worthy of great attention from fans and critics alike.