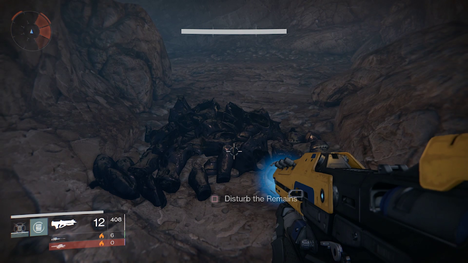 The now infamous Loot Cave in Destiny has a new look – a grave. The Loot Cave was a cave on Earth in the Destiny universe where enemies would respawn and could be easily farmed for experience and items.

The respawn point was patched out by Bungie who wanted players to play the game instead of farm. They have now made a memorial to the event with a pile of charred bodies near the entrance to the cave.

The bodies can be examined and after doing so a voice eerily echoes "A million deaths are not enough for Master Rahool." Rahool, also known as the Cryptarch, is who players go to when they get Engrams decoded. Engrams are the loot drops of enemies which essentially makes Rahool the controller of items.

Even though Bungie patched out the Loot Cave, these new editions they have made it forever a part of the game’s lore and universe.