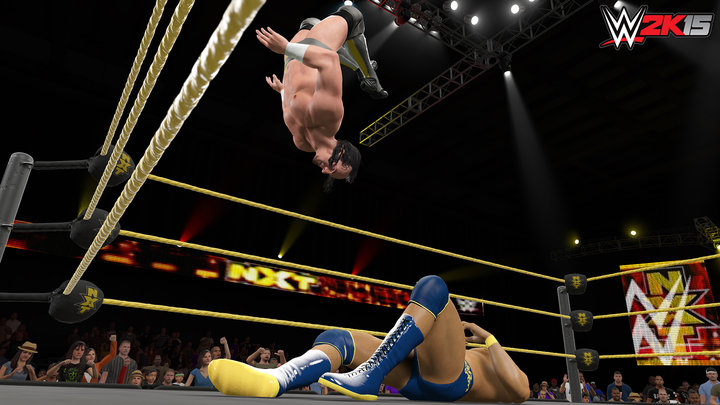 2K Sports has announced the downloadable content for WWE 2K15. This year's game will offer more than $50 worth of DLC, more  than any other WWE game in the past. It will consist of different packages players can purchase with varying prices for each individual package.

The cheapest DLC package is “The Accelerator.” By purchasing this package players gain access to all unlockable content within the game. This package will cost $1.99.

There are three packages based around the new 2K Showcase mode. The first package is “2K Showcase: One More Match.” In this package players can play through the 2011 rivalry between Randy Orton and Christian. This package will also include other playable characters: Edge, Mark Henry, and Sheamus. Players will also unlock playable arenas from 2011 including SmackDown, Extreme Rules, Capital Punishment, and Over the Limit. This package will cost $9.99.

The second 2K Showcase DLC is “2K Showcase: Hall of Pain.” This DLC story will focus on the career of Mark Henry. Other playable characters in this story are: Big Show, Kane, The Usos, Sheamus, The Great Khali, Randy Orton, Daniel Bryan, and Ryback. Players will also unlock arenas including, SmackDown, Vengeance, and WrestleMania 29. This package will cost $9.99.

Some of the DLC packs will only feature new playable characters. One of these packs is the “WCW Pack” with this package players receive former WCW wrestlers, Fit Finlay, Lord Steven Regal, Bam Bam Bigelow, Lex Luger, and Diamond Dallas Page. This package will cost $7.99.

Another pack that will only feature new playable characters is “NXT Arrival." With this package players are able to play as, JBL, Adam Rose, The Ascension, and Emma. This package will cost $6.99.

“New Moves Pack” is a DLC back that only features new moves that can be performed in the ring. With this package players unlock more than 30 different moves that will be made for existing and created characters.

There will be a season pass available for $24.99. The season pass will come with WWE diva Paige. With the season pass players will receive all DLC packages except for the “New Moves Pack," “WCW Pack,” and “NXT Pack.”

WWE 2K15 will be available on PlayStation 3 and Xbox 360 on October 28 and will be released for the PlayStation 4 and Xbox One on November 18. No release date has been announced for the DLC.