Upperclassmen typically carry the offensive burden for baseball teams, but Ball State is an exception.

The Cardinals stand at 22-10 overall and 7-1 in the Mid-American Conference, just a half game behind the Central Michigan Chippewas for first place in the MAC West. The team has veteran seniors such as Sean Godfrey and T.J. Weir leading the team, but youth has provided sparks for both the offense and pitching staffs.

Ball State has four freshmen who are batting over .300 and play strong defense, making last year’s graduation of players such as center fielder Wes Winkle and infielder Billy Wellman negligible.

“We have a lot of really good young players who have displayed their talent from the beginning,” head coach Rich Maloney said. “I didn’t know how they were going to react, but they came in and weren’t intimidated.” 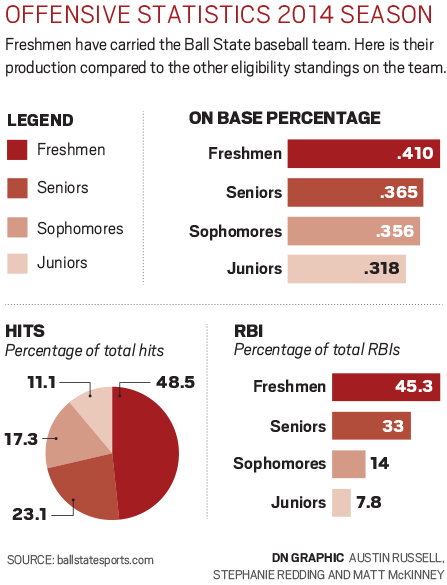 The losses left sizable gaps in talent and leadership, ones that could be difficult to replace. Winkle spent a lot of time running and diving to catch balls that were nearly out of reach while Wellman was a consistent infielder.

With question marks dotting Ball Diamond, Alex Call and Caleb Stayton have stepped up. Call occupies center field and is hitting .336 while committing just two errors. Stayton controls first base and has the second highest batting average on the team with 348.

With the other young players, an offense that was inconsistent at best last season has risen to be one of the most lethal in the MAC.

The Cardinals are scoring 6.3 runs per game, a full run higher than what the 2013 team averaged at the end of the season, and is currently hitting .292. The top of the lineup is getting on base, allowing for RBI opportunities for the middle of the order.

“It felt like every time I went up to bat, there were guys on base for me to knock in,” Sean Godfrey said after Sunday’s win against Eastern Michigan. “Players get into a rhythm and the offense starts putting up a lot of runs.”

Supporting the rookie batters is fellow freshman pitcher Zach Plesac. Plesac has stepped in after the team lost Chris Marangon, becoming the most consistent pitcher for Ball State.

He made his debut Feb. 16, when he pitched in a doubleheader against Morehead State and Wofford, picking up two wins in the process.

He leads the team in wins with six and his ERA is the lowest on the pitching staff at 2.30. On Sunday, he pitched 6.2 innings and allowed just one run, leading Ball State to a weekend sweep of Eastern Michigan.

“I didn’t know how [the freshmen] would do in their first year,” Maloney said. “At the end of the day, when you have a talented bunch that works really hard, there’s going to be success.”

By Daniel Kehn and Adanna Mbanu / 1 hours ago

Category 4 storm, Hurricane Ian, made landfall in Florida Sept. 28, causing destruction unseen for years. The morale of many Florida residents and natives is low, yet many are hopeful their area will bounce back.

By Meghan Sawitzke / 8 hours ago