A cellphone ring shattered the silence of a pitch-black bedroom.

Julian Welsh-White rolled over and called the number back. It was his aunt’s number, but not her voice.

The voice was high-pitched and scratchy, unlike any voice he could recognize.

It was his mother’s.

She was speaking through her throat because of her recent tracheotomy.

He had forgotten what she sounded like. He hadn’t heard it for nearly three months.

In June 2013, the junior middle attacker for the Ball State men’s volleyball team was in Orlando, Fla., coaching for Munciana Volleyball Club.

Welsh-White’s brother contacted him to tell him that his mother, Stacie Welsh, went to the hospital during a family vacation in North Carolina. She had been having pain in her back and neck while feeling tingling and numbness in her hands and feet.

On the second day of the vacation, Welsh-White’s aunt took his mom to the emergency room twice because her discomfort was becoming unbearable. 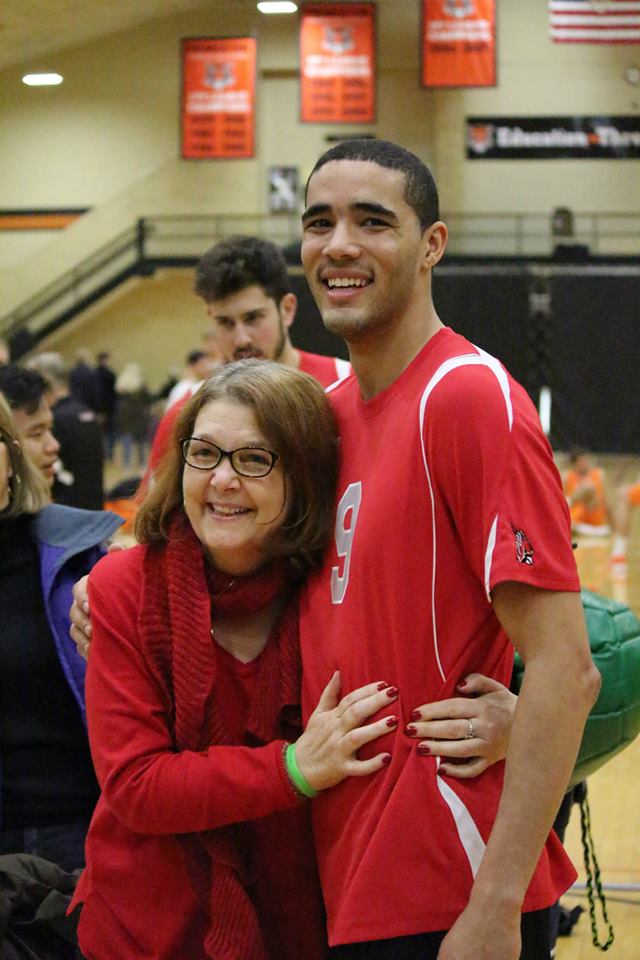 “She had been complaining about this tingling feeling in her arm the day prior when I spoke to her,” Welsh-White said. “I knew she had been in a lot of pain the previous night.”

By the next day, her condition worsened and her family had to carry her out of the house and to the ambulance.

Her body was shutting down.

She was rushed to a local hospital and began a series of tests to determine the problem.

Doctors feared she had Guillain-Barré Syndrome, a rare neurological illness that can leave a person permanently paralyzed and has the potential to be fatal. About one person in 100,000 has the syndrome, according to the National Institutes of Health.

Welsh was transported to a hospital in a helicopter in Norfolk, Va.

“They were telling me to be glad I wasn’t there because it wasn’t a good sight,” he said.

Welsh-White stayed updated through his phone. He couldn’t leave Orlando because of his coaching obligations.

Once the tournament ended, he flew to Muncie and was at Ball State for less than 12 hours before flying out of Indianapolis to Norfolk.

His mother could no longer speak or move anything except her eyes.

At the hospital in Norfolk, the doctor’s initial fears were confirmed. Her immune system was attacking and damaging her nerves, causing numbness and paralysis.

While research hasn’t provided an exact cause of GBS, many people get the syndrome after respiratory illnesses or stomach flus, according to the Mayo Clinic. While it’s rare, it also is possible to develop GBS after a vaccination.

Welsh hadn’t had a shot for months.

“It was very life threatening and extremely difficult to deal with,” Welsh-White said. “And it was confusing because none of us could figure out how she contracted it.”

Her memory of the events were lost. Welsh said she can’t remember the first 10 days after the paralysis set in.

She was put on a ventilator and feeding tube just to keep her alive. Doctors said it could be years until she would function normally.

“It was bad, it was so bad,” Welsh-White said. “It was just the worst feeling ever.”

There were no warm, familiar hugs from his mom. No welcome home kisses. No “I love you” from her during the hundreds of times he would walk in her hospital room.

“This is somebody who has raised you your entire life,” he said. “To see them in the state they’re in, it’s hard to deal with.”

Welsh-White’s time was consumed with thinking about his mother, wishing he could be with her. The bright, upbeat junior had become quieter and reserved. Throughout the summer, he kept his mother company whenever possible.

He considered dropping out of Ball State, where he studies sports administration, so he could stay at home as August got closer. But he knew his mother wouldn’t approve.

“She wants me to finish school,” Welsh-White said. “She always tells me that her motivation is to see me doing well in school, to see me excel.”

He called head coach Joel Walton and explained the situation. The team is a part of his family, and he didn’t want to go back without them knowing what was going on.

Back in Muncie, he found it hard to concentrate on academics as his mother was halfway across the country. He kept his situation private, only sharing sparse details with his teammates.

On Sept. 10, 2013, Welsh took a critical step forward. She spoke to her son for the first time since June.

“Her voice was high-pitched and really scratchy, but it was still her voice,” Welsh-White said, smiling. “It was just wonderful to hear.”

The doctors had removed her ventilator and performed a tracheotomy, allowing her to breathe on her own for the first time in months. She was using the tube to speak.

About a month later, when Welsh-White surprised her by visiting home in Collingswood, N.J., she was able to make small movements with her arms and legs.

“Words can’t explain how that felt,” he said. “There’s just no way to say it. It’s indescribable.”

He approached her bedside in the hospital, and she raised her arms for a hug.

“Being able to hug my family again, it means everything,” Welsh said. “It’s been a long process. … I’ve made it a long way.”

During Winter Break, Welsh asked her son to come see a surprise. So, he went to her rehabilitation facility.

Her hands grasped the bars of a walker and an assistant held onto her from behind as she took slow, powerful steps forward.

She left the hospital and went through multiple rehab facilities, slowly working her strength back.

On Feb. 8, Ball State had pulled up to Dillon Gym, home of the Princeton Tigers, and unloaded its players and equipment. The university is in New Jersey, not far from where Welsh-White’s family lives.

At most games when the team gathers in its pre-match huddle, Walton usually talks about the plan or says something to fire up the team.

He said something else: Welsh-White was in.

Walton wanted to dedicate the match to Welsh, who was in the crowd.

“It was really special for me,” Welsh-White said. “She’s finally starting to get over being very, very sick for half a year, and it was really good having her there.”

In front of his mother, he walked on the court. Welsh had just learned how to whistle, and she whistled proudly from the stands for her son.

It was the first time she was going to see him play in a Ball State uniform.

She watched her son go on to win the match, and afterward, she met him on the court for a picture.

She walked to him and wrapped her arms around his midsection. Smiles spread across their faces.

She still has miles to go, but for that moment, it didn’t matter. They were with each other, and she was holding on.

For more information, go to staciewelsh.com.

By Zach Carter / 7 hours ago

The Burris Owls have now won their last four games. Their latest victory was this Friday night’s matchup against the Seton Catholic Cardinals. The red-hot Owls defended Ball Gymnasium as they soared past the visitors 48-32. But this win was special for the home team for a few reasons. First, it was homecoming week. Second, this is the same Owls team that started the season 0-8.

After almost a week off and some key starters resting, the No. 8 ranked team in the Midwestern Intercollegiate Volleyball Association (MIVA), Ball State Men’s Volleyball returned for another weekend of home matchups inside Worthen Arena

By Caleb Zuver / 9 hours ago

It came down to the wire, but the Ball State Men’s tennis team is 2-0 on the young season after defeating the Illinois State Redbirds (3-1) 4-3 on Friday.