Late Saturday night, a Ball State student was stabbed in the Worthen Arena parking lot in an attempted robbery, according to an email the university sent that informed students of the incident. But the email did not ask people to take any additional actions.

Police have not found the suspect.

Nearly two hours after the Ball State email, two IU students confronted another student and slashed him across the back, according to the Associated Press. A number of emergency alerts told IU students to “seek shelter behind locked doors.”

“Until you hear accounts of what happened, you don’t think it was a big deal [based on the email],” he said. “At IU, they told everyone when they caught the [suspects]. Here, [students] don’t even know if he is still out there.”

He also said the university should give students hourly updates until the suspect is apprehended.

Alan Hargrave, associate vice president for student affairs, said updates should be used for emergency information as needed. He said some students want information simply because they are curious.

“We will send updates as we feel they are necessary,” he said. “Curiosity is probably not the best use of the emergency messaging.”

Tony Proudfoot, associate vice president for marketing and communications, said it is impossible to compare instances on the same campus, let alone another.

He also said police may have additional information, which is not public, that helps to determine the level of response necessary to keep students safe.

Bailey Moser, a sophomore journalism and theater major at IU, said she was happy about IU’s response.

“They more than made sure we were aware,” she said. “I was getting calls all through the night. I got three or four calls that kept waking me up.”

Moser said the university “hit the panic button pretty fast” by sending out several emergency messages and is glad the university told students how to stay safe while keeping them informed.

Indiana University police declined to comment on its choice to give students actions to take.

At Ball State, however, some students were complaining about a lack of information.

Ball State students received one email at about 1:30 a.m. that was meant to “call for no specific action and simply raise awareness,” the email said.

Paige Belanger, a sophomore dietetics major, said even though students should be intelligent enough to take precaution, the university should explain to students the best action to take.

“[The university should] just say ‘stay inside’ or something,” she said.

Ashley Carter, a sophomore business major said because the event occurred on a weekend when students are likely to be out drinking, the university needed to be more active.

“The least they could do is notify students of safety habits,” she said.

When Hargrave learned students would like to receive more safety suggestions, he said students should be smart enough to take basic safety precautions.

“I’m kind of floored by that kind of response,” he said. “That is what I would do with a 6-year-old.”

Carter said the situation was similar to one that happened last year in which students were “encouraged to stay in a safe place” after a student reported they saw a man carrying a gun.

“Last year, they told us what to do,” she said. “They should have locked down [for this event], too.”

“It wasn’t some kind of mass mayhem that every single person needed to take cover,” he said. “If there was a gunman where everyone needed to do something, [the university would have acted differently].”

Hargrave said he stands behind the university’s reaction and that it would be impossible to satisfy every student’s concerns.

“Whatever we do, people are going to be critical of it,” he said. 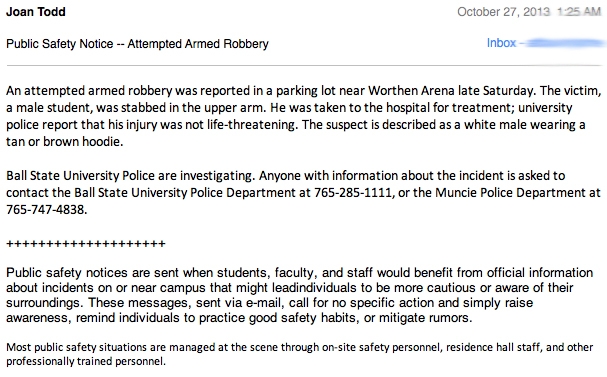 By Morgan Taylor / 12 hours ago

By Vanessa Tosino / 15 hours ago

Local Muncie owner of the Chameleon College of Beauty School, Krista Sides, has been working in hair salons ever since she was 14 years old. With so much experience under her belt, she devoted her time and effort to give back to the Muncie community and make connections with other local businesses.

By Taylor Smith / 20 hours ago