‘Till the Clock Strikes Midnight

Call it another redemption story if the shoe fits, but if I were Cinderella, I’d certainly not fit that shoe. My foot would either be too big because of the small category success it has been confined to, or it would be peculiarly small because the shoes set to fit me were never mine.

I am the first person in my immediate family (come May) to receive my Bachelor’s Degree. Some see this as a small victory in battle, but for me this is winning the war. You hear stories a lot about women who were sexually abused, slapped around (for the lack of better words) or 16 and pregnant, which for some reason society sees as the ultimate loss, but that’s a subject for another day.

I could be that story, easily. 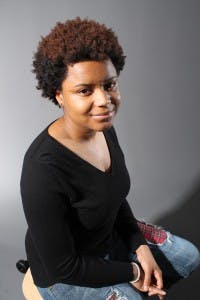 Growing up, I didn’t have much of a father figure around me. Nor a mother figure. All I truly had was my grandmother, and even to this day she is the one that is still very present in my successes.

My mother went to prison and was in and out for years upon years. I honestly can’t remember dates and times. I often believe that I repressed these memories in a zipped folder in the archives of my mind, never to be revisited again. Other than the child support that halted almost at its genesis, I have memories I’ll never find.

I always wondered what anguish must have been against my ancestors that all this iniquity seemed to fall and trickle down to me. My grandmother took me in officially in the fourth grade (not legally) and raised me until last December, when she retired from Ball State and moved to Texas. No, I didn’t receive a discount for her being an employee because I wasn’t legally hers.

But I know that even as I look at her picture, the only picture at my desk, she is one of the only reasons I made it through. Alongside the mercy of God, you’ll see her there. I made good grades, I volunteered, went on mission trips and became a “public figure,” if I will, in the Muncie Community, yet still I wasn’t satisfied with the shoe.

No one probably knew that I had over seven other siblings, who I’ve always felt distanced from. A father I felt was never there. A mother whom I have so much hope in. One sister whose heart is kinder than mine (and I love that). A long list of men that I let use me.  And some young moments of molestation that changed into a desire I never knew existed.

No one would know that I’ve sang and wrote my way through life, but what everyone will know is that I am going to graduate with a Bachelors in Organizational Communication on May 3, 2014. And because of that, I’ll jam my foot into the shoe, because it fits.

To read more voices like Garrett's, check out the Voices page at ballbearingsmag.com