What: “Anna in the Tropics”

Tickets can be purchased at the University Theatre Box Office or online.

“Anna in the Tropics” follows the story of a Cuban-American family that owns and operates a cigar factory in Ybor City, Florida. Ybor City, near Tampa, was considered the cigar capital of the world after Havana, Cuba.

It’s 1929, and the family and its workers are still rolling cigars by hand. To entertain them while they work, a lector is hired to read during three shifts — local news in the morning, international news in the afternoon and novels at night.

Veronica Santoyo, an assistant professor of theater and dance, is directing the play. She said the lector was educating the workers, though many of them were illiterate.

“They were very rich culturally,” Santoyo said. “They could discuss world events and literary figures. This play really showcases a cultural aspect of this particular group of people.”

“They project themselves onto the characters in the novel,” Santoyo said. “They go through this emotional catharsis.”

Santoyo said one of the challenges with this play has been working in the round, a type of stage set-up where the audience sits on all four sides of the stage. 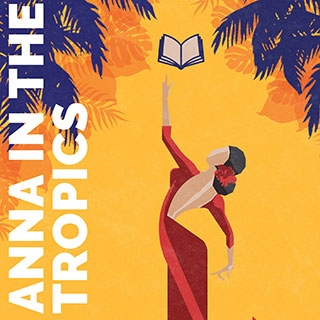 “It’s wonderful, but challenging in terms of how to move in the space,” she said. “We have to balance the space and learn how to act in such an immersive atmosphere.”

Teaching in the round was a learning experience for Santoyo. Although she’s performed in the round herself before, and even directed there, she said she hasn’t worked with actors who’ve never worked in the space.

“I had to learn how to help them process and adjust, and effectively work in that space,” she said. “I always assumed before this that those I was working with had experience in the round, but that wasn’t the case with this show.”

One aspect of the performance that was added specifically for this production is a “moving chorus.” These actors portray factory workers, and provide back-up to the main characters through their movement.

“Anna in the Tropics” opens at 7:30 p.m. today in Strother Theatre. Tickets can be purchased at the University Theatre Box Office or online.