We’ve all been there — late to class, power-walking through the Scramble Light until suddenly, you’re blitzed by a frustrated cyclist.

The university is working to fix that.

In an effort to make the university more bicycle friendly, primary recommendations from a new "Bicycle Master Plan" were unveiled to the public Wednesday in the L.A. Pittenger Student Center.

Kevin Osburn, the managing principal at Rundell Ernstberger Associates, is involved in the project planning and said this is “an opportunity to check back with the Ball State community and say, 'Here’s what we’ve learned, here’s the direction we think we’re going, and did we get it right?'” 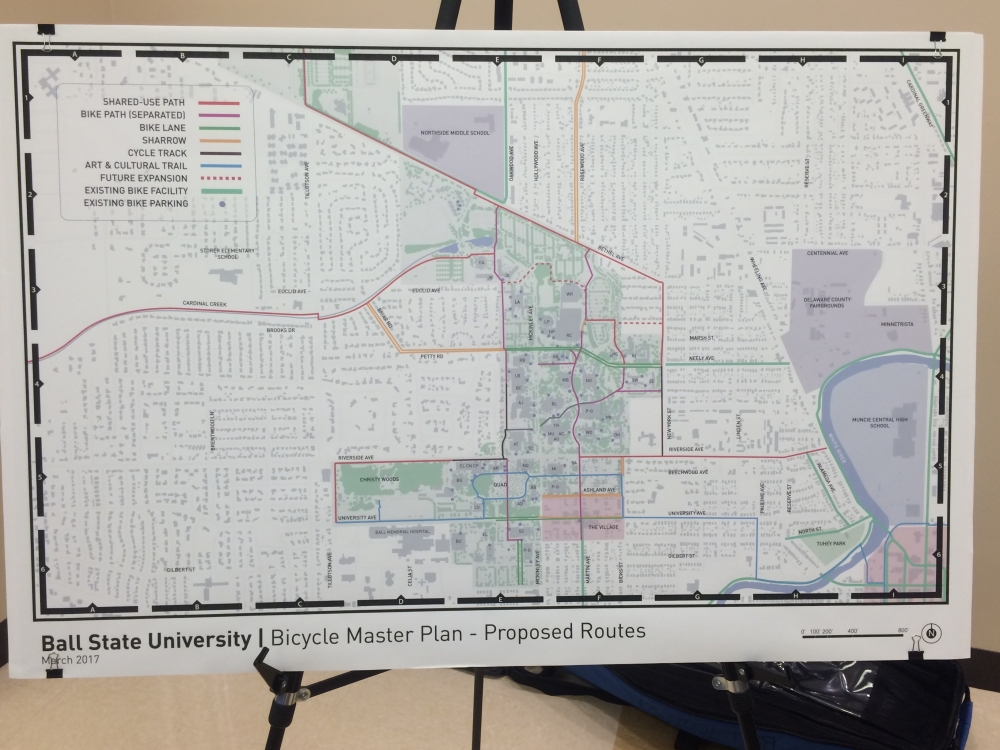 The university and Rundell Ernstberger Associates began creating the Bicycle Master Plan in late 2016. They hosted two open houses to receive feedback from the campus community, according to bsu.edu. The proposals for the plan were based on surveys collected from students and faculty, which were used to identify "problem areas" for cyclists.

The problem areas reported were concentrated around McKinley, Riverside and New York Avenues. Future plans focus on moving bicycle traffic away from problem areas and utilizing the cow path.

The plan also addresses considerations of the physical characteristics of new routes. The proposals included the use of shared-use paths (footpaths for pedestrians and cyclists), bike lanes (sharing the road with cars) and bike paths (separate from other paths) in hopes of increasing the safety and mobility of students, faculty and visitors.

Jim Lowe, associate vice president for facilities planning and management, said the development of a bicycle master plan has been discussed for many years.

The introduction of bike share options at Ball State was also discussed in the presentation.  A system like this could resemble the Pacers Bikeshare system in Indianapolis, where individuals could rent bikes from a station and then return them to the docks at the end of a set period. Another possible system would allow students to rent a bike on campus, ride it to downtown Muncie and have a place to lock it up there. This part of the project is still in the preliminary stages.

"It’d be great next year to be able to ride my bike and not have to worry about hitting pedestrians or getting hit by a car," Biederstedt said. "I’m pretty excited, it should be nice."

Osburn said they are looking for more feedback and input from the community and students before plans are finalized in early May.

By Olivia Ground / 10 hours ago

“I think we were that good,” head coach Brady Sallee said. “I don't think Akron was necessarily bad. I just think we were that good.” For Wednesday night's midweek Mid-American Conference (MAC) play it was the second-seed Ball State Cardinals and the third-seed Akron Zips. On paper, this game should be close, but it was anything but.