The Cardinals are coming off a 31-24 home loss to Northern Illinois last week, while the Chippewas suffered a 49-10 blowout loss to No. 25 Western Michigan. Ball State leads the all-time series 24-23-1.

Jake Fox, the Daily News football reporter, is traveling to the game and offered up some insight on the key positional matchups:

This is a case of Central Michigan's biggest strength vs. Ball State's biggest weakness right now. This mismatch is pretty significant — and likely the biggest reason why the Chippewas are favored by 12.5 points.

Senior quarterback Cooper Rush is the FBS active leader in career passing yards, and has thrown for 1,537 yards and 14 touchdowns through five games this year. Rush has got a lot of weapons on the outside as well. Four Chippewas have at least 13 receptions and 200 yards receiving.

Ball State has struggled in the secondary this year, and especially the last two weeks against Florida Atlantic and Northern Illinois. Rush has a good chance to get back on track against a defense giving up 273.8 passing yards per game.

Central Michigan hasn't been good on special teams this year, plain and simple. Kicker Brian Eavey is just 2-6 on field goals, and the Chippewas rank 10th in the MAC in punting average at 34.4 net yards per punt.

Ball State, on the other hand, has been fairly solid. The Cardinals are third in the conference in punt return average, and kicker Morgan Hagee is 7-10 this year. They also blocked a punt and returned it for a touchdown at IU in the second game of the season.

Special teams play is often overlooked, but this is a matchup Ball State could take advantage of.

The Cardinals had only one sack last week, but part of that was due to Northern Illinois quarterback Anthony Maddie's mobility (160 rushing yards and a touchdown). Ball State is still among the NCAA leaders with 18 sacks this year.

Central Michigan has given up 18 sacks through five games, including eight in last week's loss to Western Michigan. Rush also doesn't run the ball like Maddie does. He's only gained 83 yards on 26 carries (-21 net yards when the 18 sacks are factored in).

Led by Anthony Winbush and Joshua Posley, Ball State's pass rush will be key in slowing down the passing game as much as possible.

The Chippewas don't run the ball very effectively on offense, but they do a pretty good job of stopping it on defense. They're allowing just 135.6 yards per game, right above Ball State at fourth in the MAC.

James Gilbert was effective against Northern Illinois with 119 yards and a career-high three touchdowns, but quarterback Riley Neal was second with 16 net yards. The Cardinals' committee in the backfield has dwindled the past few weeks with Gilbert getting the bulk of the carries. Right tackle Steve Bell is a game-time decision this weekend, and running back Darian Green has been limited in practice also.

Based on Central Michigan's ability to move the ball and put points on the board, this seems like a game that will end up being more pass-heavy for Ball State. Thus, the rushing numbers may be well below average for the second straight week. 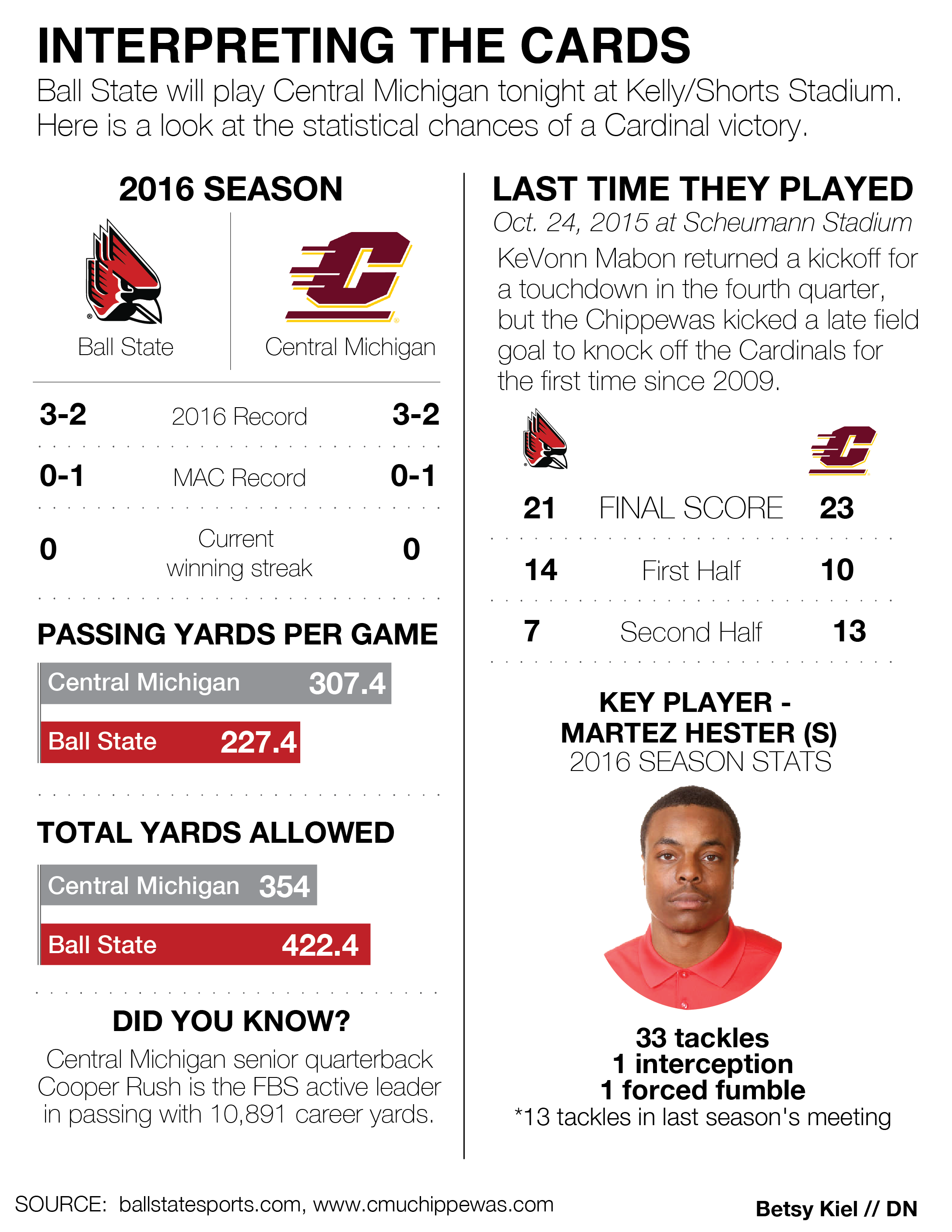