The Broncos raced out to a 30-0 lead in last year's meeting and walked off their home field with a 54-7 blowout victory.

Jake Fox, the Daily News football reporter, is covering the game and offered up some insight on the key positional matchups:

One of the most impressive statistics about Western Michigan is that it ranks second in the nation in turnover margin at +12. Quarterback Zach Terrell just threw his first pick of the season last weekend.

Terrell, a fifth-year senior from Fort Wayne, has thrown for 1,995 yards and 20 touchdowns this season while completing 72.3 percent of his passes. And he's got one of the top receivers in the nation in Corey Davis, who torched the Cardinals for 163 yards and three scores last year.

Ball State gave up 338 yards and two touchdowns to Akron's Thomas Woodson in its last game, and ranks second-to-last in the MAC in pass defense overall.

Western Michigan's passing attack will be too much to handle in this one.

The Cardinals started out the year sacking opposing quarterbacks at a rapid pace, but that has slowed down with just one over the last two games.

Opposing running backs have also had success against the Cardinals recently. The defensive line just isn't getting the same penetration it was through the non-conference slate.

Western Michigan has allowed 11 sacks this year for a total of 54 yards. So there's a chance Ball State could get to Terrell, but look for the Broncos to establish the running game and open big holes for tailbacks Jarvion Franklin and Jamauri Bogan.

If those two get going and the line can keep Terrell upright, it could be a long night for Ball State.

Of all the matchups in this game, this might be the most interesting because it's clearly Ball State's strength.

Sophomore James Gilbert has been a beast all season for the Cardinals. He's third in the country with 987 rushing yards and has 11 touchdowns to go with it. Junior Darian Green has looked good since he returned from injury, and quarterback Riley Neal has been successful running the ball.

Western Michigan, on the other hand, is second in the MAC in rushing defense. The Broncos have only given up 132 yards per contest this season.

Ball State's personnel may be stronger in this matchup overall, but if Western Michigan takes an early lead, the rushing numbers will suffer.

The Cardinals' passing game as a whole has struggled this season.

Head coach Mike Neu said the Broncos are going to run man coverage, because they think their guys are better than yours. And, with the exception of senior KeVonn Mabon and on occasion freshman Damon Hazelton Jr., Ball State just doesn't have a receiving group that can get separation.

Western Michigan has nine interceptions on the season, and three different players have two. The Broncos held Northern Illinois star receiver Kenny Golladay to five catches and 99 yards a few weeks ago.

In a game that should feature a lot of passing attempts, the Cardinals' receiving corps could struggle just like in last year's meeting (12 catches, 78 yards, one touchdown). 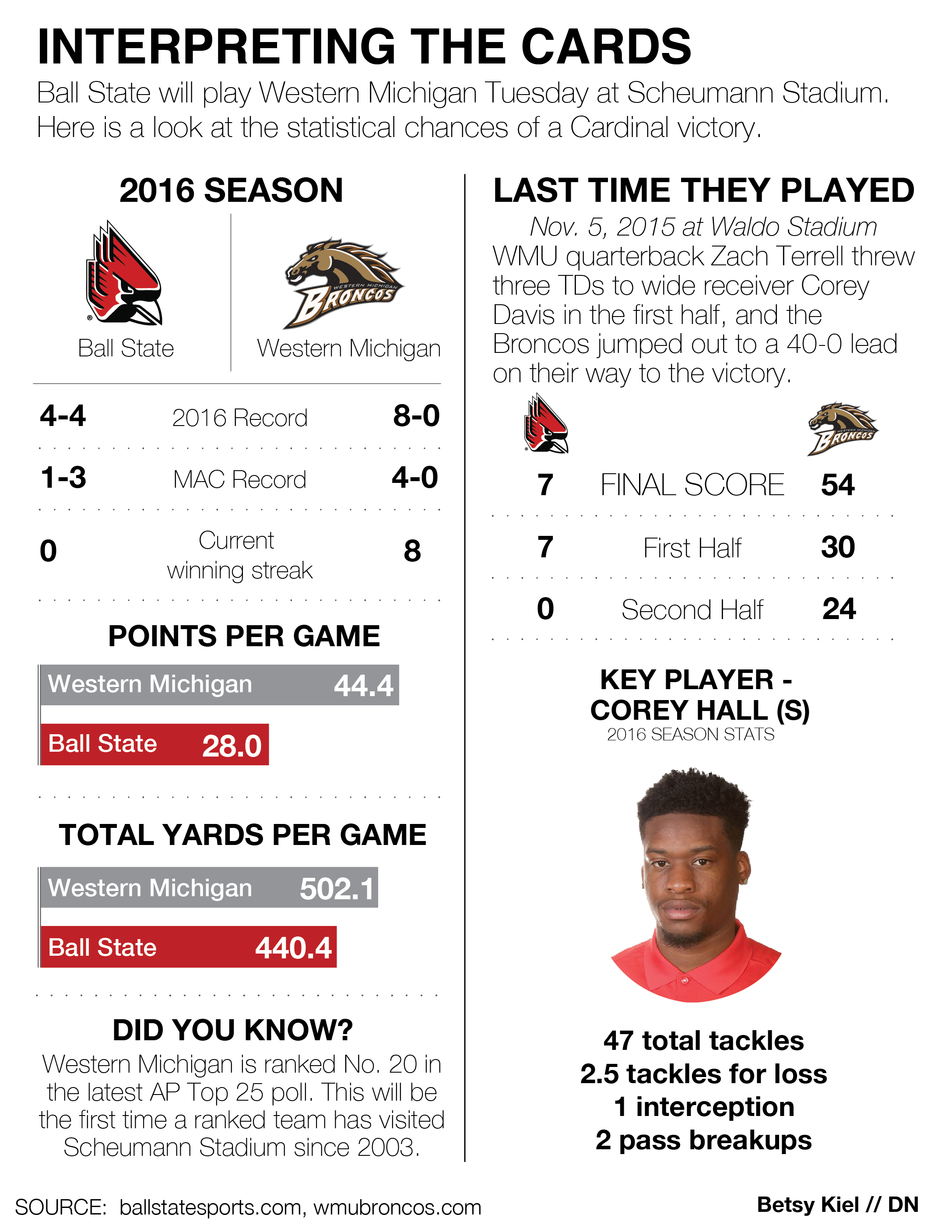