Ball State (3-3) travels to Buffalo (1-4) for a Mid-American Conference matchup on Oct. 15 at University of Buffalo Stadium, the first meeting between the teams since 2011.

The Cardinals hold an 8-1 record in the series, including a 4-0 all-time record on the road at Buffalo.

Ball State is coming off a 24-21 road loss to Central Michigan last week, while the Bulls were dealt a 44-20 loss by Kent State on their home field.

Jake Fox, the Daily News football reporter, is traveling to the game and offered up some insight on the key positional matchups:

The Bulls appear to be the next victim of running back James Gilbert and his streak of monster games.

Gilbert leads the MAC in carries (123), rushing yards (590) and rushing touchdowns (8). After starting the year in a full-blown committee, the sophomore has taken control of the backfield with 260 yards and five touchdowns in his last two games.

Buffalo has struggled mightily against the run this year, ranking third-to-last in the nation in yards per game allowed at 271.2. Kent State hung 341 rush yards and four scores on the Bulls' defense last week.

Junior Darian Green sounds doubtful for the game, but the Cardinals will have freshman Malik Dunner back. Regardless of who's available, Gilbert is in line for another big game.

Given Ball State's success in rushing the passer this year, it would appear they have a clear edge. But one thing the Cardinals have struggled with is mobile quarterbacks.

Redshirt freshman Tyree Jackson's ability to run, along with steady offensive line play, has resulted in only five sacks this season. Jackson is 70-138 for 725 yards and four touchdowns through the air, and is the team's second-leading rusher with 219 yards and three touchdowns.

Ball State does have 23 sacks on the season, however, and will look to challenge the Bulls' front line. Defensive ends Anthony Winbush and Joshua Posley have gotten into the backfield consistently this season.

If the Cardinals can keep tabs on Jackson's scrambling, their pass rush should force the young quarterback into some mistakes.

After last week's two-interception performance, head coach Mike Neu said this week could be a defining moment in Neal's career.

Neal has thrown for 1,301 yards and six touchdowns while completing almost 60 percent of his passes. He's also ran for 194 yards and three scores. But the big number is the six interceptions.

After Neu called him out about taking the next step, look for Neal to get back on track in this one with all of his receivers ready to go.

For all the bad moments Ball State's defense has had this season, Buffalo's offense has been worse.

The Bulls rank last in the country in offensive efficiency, second-to-last in first downs gained and in points per game. The offense only gained 67 yards in a loss to Boston College this year, and has only held a lead once.

Northern Illinois torched the Cardinals on the ground and through the air a couple weeks ago, but they had a better showing against Central Michigan last week. The defense came up with some big plays in the second half to keep the team in it.

Buffalo's offense hasn't put it all together in a game this year, and it's hard to see it happening here. Ball State has a good chance to regain some confidence on that side of the ball. 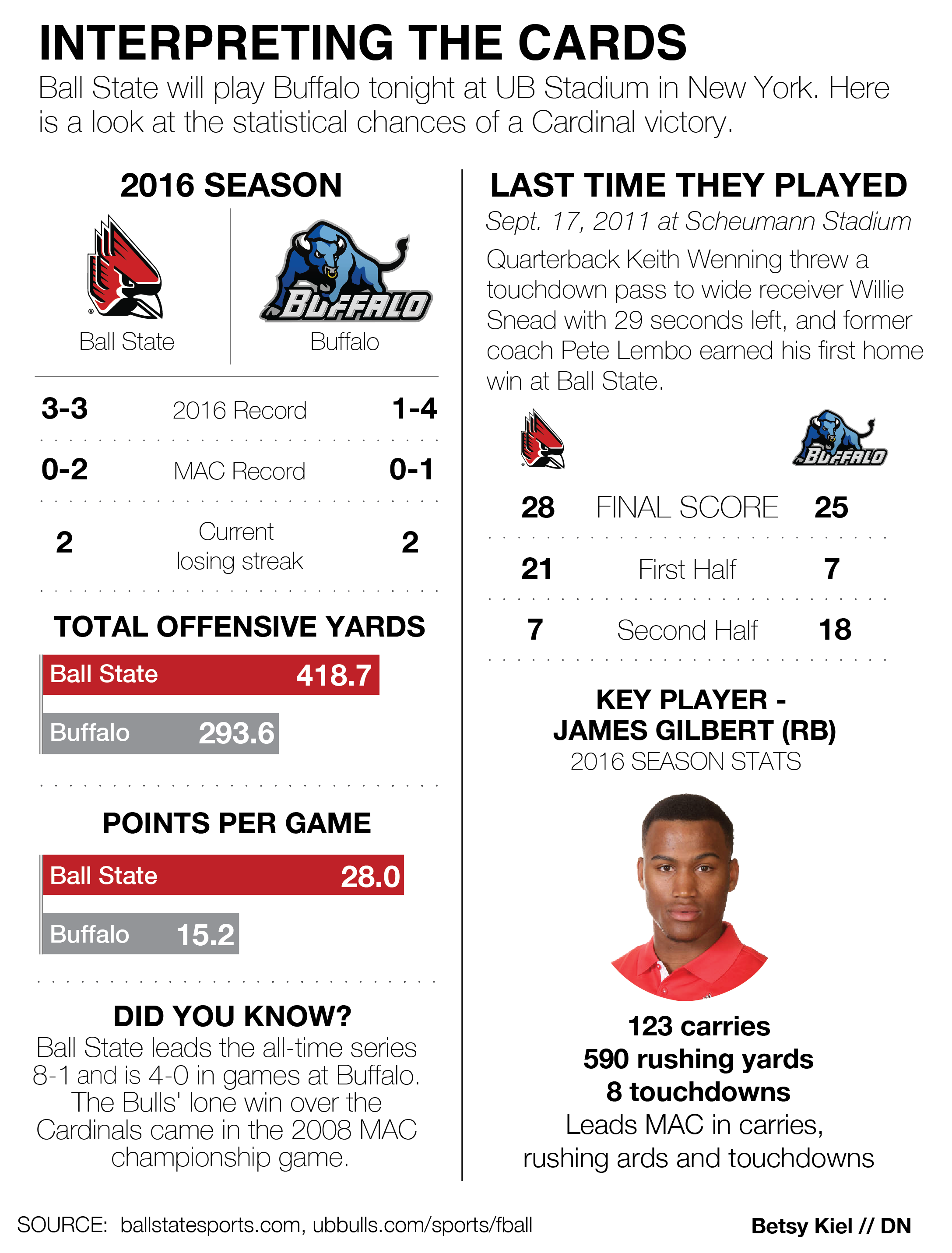