The Cardinals are coming off a 31-27 comeback over Florida Atlantic last week, while the Huskies late rally fell short in a 28-23 home loss to Western Illinois. Northern Illinois leads the all-time series 21-20-2, and has defeated Ball State seven straight times dating back to 2009.

Jake Fox, the Daily News football writer, is covering the game and offered up some insight on the key positional matchups:

Neal, a sophomore, had a huge game in last season's 59-41 shootout, finishing 31-53 through the air for a career-high 393 yards and four touchdowns.

He's thrown some bad interceptions this year, but Neal has been heating up lately, including a four-score performance last week at Florida Atlantic. The Huskies have been shredded through the air this year for 262.8 yards per game and 10 touchdowns with only one interception.

Huskies' head coach Rod Carey said Neal looks like he's throwing and running even better this year, which could mean another high-scoring affair.

Redshirt senior Drew Hare came in as one of the MAC's top signal-callers before an injury against South Florida knocked him out of the lineup Sept. 10.

The Huskies will turn to Anthony Maddie (who's listed as a wideout on the roster) against the Cardinals this week. Maddie sparked the offense in the second half of last week's game against Western Illinois, throwing for 142 yards and a touchdown in relief of sophomore quarterback Ryan Graham.

Ball State's pass rush feasted in wins over Georgia State and Eastern Kentucky, who also came in with questions at quarterback. Carey said he wants to stick with one quarterback, but the Cardinals' blitzing schemes may make that difficult.

Northern Illinois makes up for its quarterback struggles with a plethora of experience at the offensive skill positions.

Senior wide receiver Kenny Golladay ranks near the top of the MAC with 24 catches, 372 yards and four touchdowns this year, and he's also a threat on the ground with two touchdowns. Northern Illinois' backfield is headed by redshirt junior Jordan Huff, who rushed for 653 yards and eight scores, and senior Drew Bouagnon, who rushed for 1,285 yards and 18 scores a year ago.

Look for Northern Illinois to go up-tempo on offense and try to get the ball to their playmakers in space on Saturday.

Northern Illinois' tackling appears to be an issue.

The Huskies are giving up 236.2 yards per game on the ground, while Ball State's offense averages 221.0 on average. Northern Illinois held Western Illinois in check last week, but the Cardinals' committee led by sophomore James Gilbert and junior Darian Green is versatile and tough to contain. Neal chipped in with 74 yards and two scores on the ground last week.

Ball State has shown its commitment to the ground game this season and has had success against some different defensive fronts. This week shouldn't be any different. 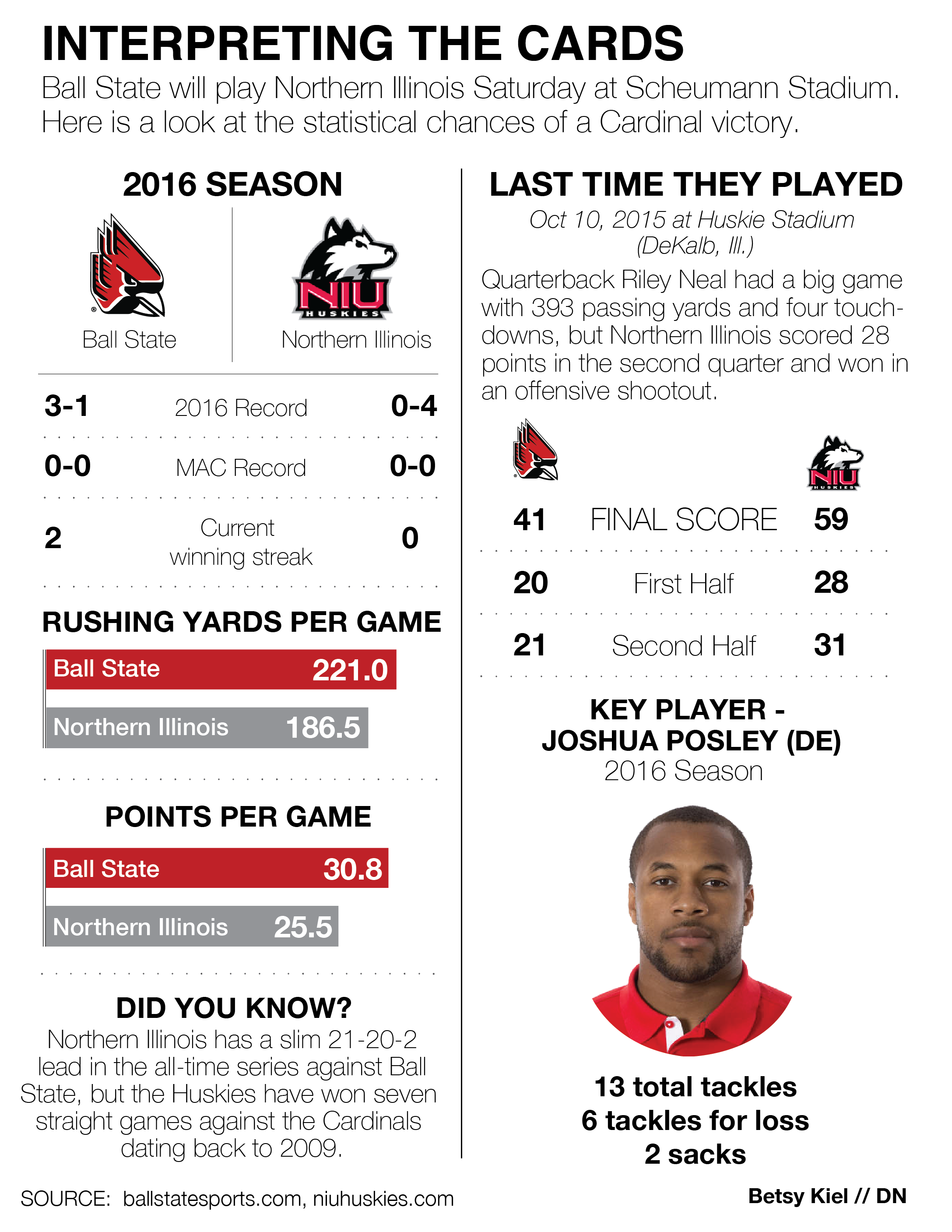