Ball State football (1-0) will travel to Indiana (1-0) on Sept. 10 for the first game between the schools since the 2012 season. Both teams are coming off a road win against Sun Belt Conference teams in the season opener — Ball State over Georgia State and Indiana with a victory over Florida International.

The Cardinals and Hoosiers will meet four times over the next five seasons, starting with this matchup at Memorial Stadium. Ball State has won the last three games of this in-state rivalry.

Jake Fox, our football beat writer, is traveling to the game and offers up some insight on the key positional matchups:

After last week's game, this looks like a matchup of strengths. The Hoosiers carried the ball 52 times for 246 rushing yards and a touchdown against Florida International, while the Cardinals held Georgia State to 77 rushing yards.

But things are different this week. Indiana is more committed to the run than Georgia State, and the Hoosiers have a talented feature back in Devine Redding. Redding rushed for 1,012 yards on 226 carries with nine touchdown as a backup to now-Chicago Bears back Jordan Howard.

The Cardinals' defense has some playmakers on the defensive line and at linebacker, but the Hoosiers' depth at running back and veteran offensive line gives them an advantage here.

Ball State's O-line had a big performance last week and got a lot of the credit for a 325-yard rushing performance. The holes will probably be smaller in this game, as Indiana brings in a ton of size and experience.

Indiana only had one sack a week ago, but are coming off a 30-sack campaign in 2015.

For a fairly new unit to go into hostile territory against a Big Ten defensive line? That's a tough spot for the Cardinals' front five.

Neal struggled at times last week, finishing 15-29 for 130 yards and two interceptions. The offense stayed afloat thanks to the running game, but it's unlikely the Cardinals rush for 325 yards again.

The Hoosiers gave up 268 passing yards on 47 attempts last week, and picked off FIU quarterback Alex McGough three times. Ball State runs a similar passing attack with a lot of quick throws, but Neu emphasized at his press conference this week he wants to get the passing game going — and last week's performance on the ground can only help that.

If the offensive line can keep him upright, Neal should have a better game this week. It wouldn't be a surprise to see a turnover, but look for Ball State to try and push the ball downfield a little more and put some points on the board early.

Junior college transfer Richard Lagow took over as the starting quarterback this season for Indiana, and threw for 240 yards and a score in the opener.

The Cardinals' secondary looked good against Georgia State. Safety Corey Hall had a pick in that game, but will miss the first half of this week's contest because of a targeting ejection in the second half. Indiana has a lot of options in the passing game and will welcome back Simmie Cobbs (60 catches, 1,035 yards, four touchdowns last season) who was suspended for the opener.

Lagow wasn't asked to do too much in during the first week, but looked solid in the fourth quarter when Indiana was trailing. Because of the balance the Hoosiers bring paired with the skill players on the outside, they have the edge here. 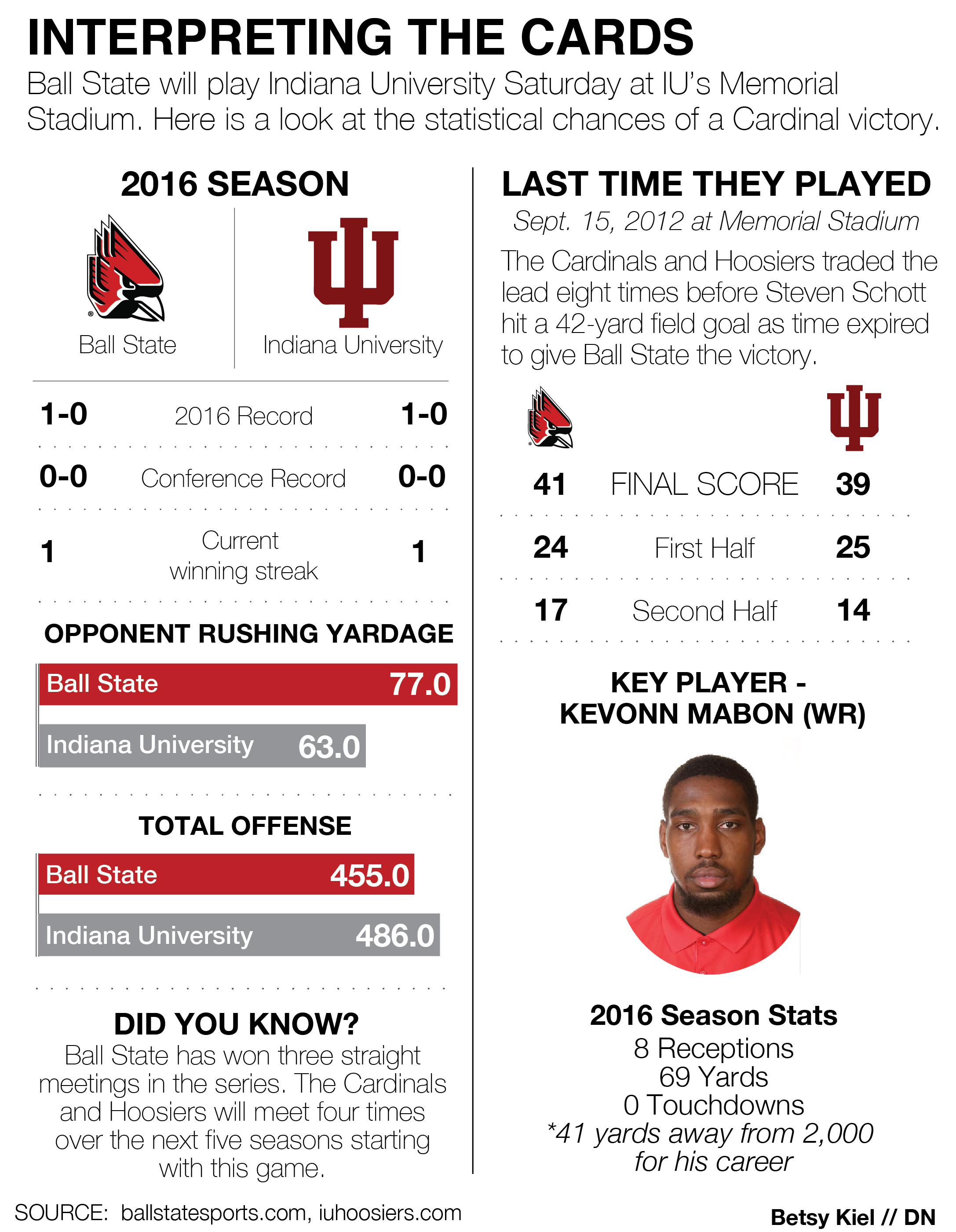