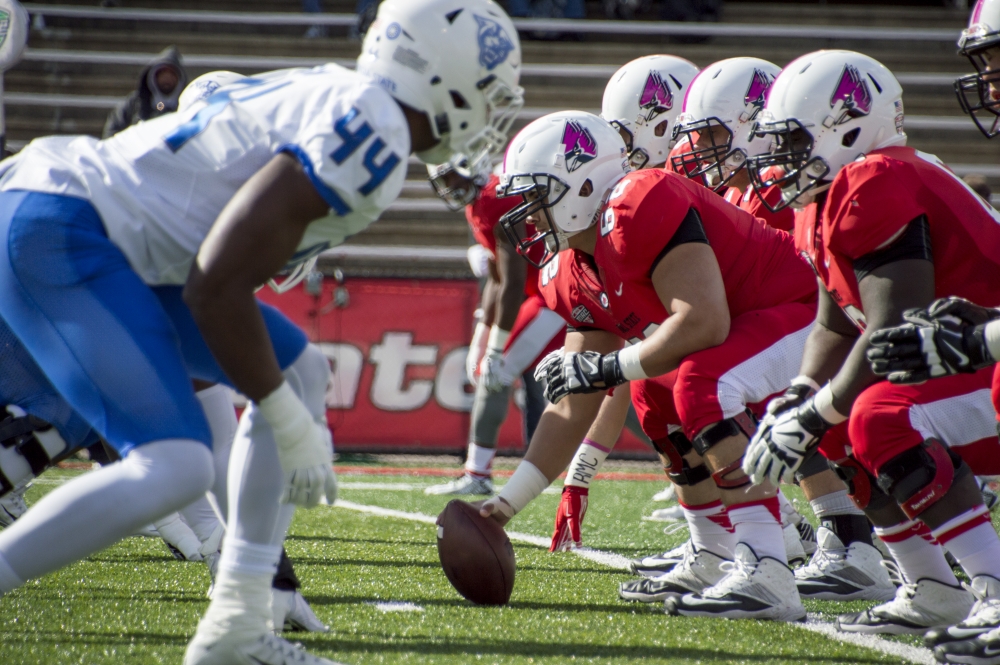 One of last season's biggest strengths is now one of Ball State football's biggest question marks.

The Cardinals' offensive line only allowed .92 sacks per game last year, good enough for fifth in the nation, but after losing three starters to graduation and its starting center to an injury in the spring, Ball State has a new look on the front line.

It's a young group compared to what the Cardinals have had over the past few seasons. But first-year offensive line coach Kyle DeVan feels good about what they have in place.

"A lot of [the seniors] were big contributors," said DeVan, who played in the NFL for five seasons. "And when you have that in a position group, especially in the o-line, and you lose that many guys, you don't really know what's going to happen. But I know they're excited."

DeVan has been rotating guys since the spring, but when redshirt freshman Andrew Poenitsch went down with an injury to a lower extremity, he had to get creative.

Redshirt junior Vinnie Palazeti started six games at guard last year but has been working as the team's first-string center in Poenitsch's absence. DeVan said he isn't sure when Poenitsch will return.

Until then, Palazeti is the man in the middle. The slide over to center has been a different experience, but it's one that he's taken in stride.

"It was a little different at first. I don't think I'm the most athletically gifted individual," Palazeti said. "But I'm trying to hit Riley [Neal] in the chest with the ball, so we'll see how that goes."

Palazeti and Drake Miller are the only returning starters from last year's unit that featured graduated seniors Jacob Richard, Nick Plavchak and Jalen Schlachter. Miller and Steven Bell, a fifth-year senior with 29 career starts, are manning the tackle positions this season.

The guard spots are occupied by redshirt junior Pat Maloney and redshirt sophomore Alex Joss, two players who have been in the system and are getting a chance to show their stuff in game action for the first time this season.

"It's been interesting, getting reps with the ones," Maloney said. "But you just do the best you can in practice, and it will transfer over to the games."

Trust is a big deal on the offensive line — five guys doing their job and performing as one unit. And as a leader on the Cardinals' line, Palazeti isn't worried about the lack of game experience to his left and right.

"They've almost gone through as many practices and as many camps as I have," he said. "Besides the 70-80 reps in a game, they've taken almost as many reps. And I have as much confidence as I could with anybody next to me as I do with them."

DeVan said the goals for the line will change from week to week based on matchups. Whether they rush for 300+ yards or pass block for 50+ plays, he's prepared to do whatever it takes to win.

They may be young, but all he sees is a group of guys ready to play.

"The term 'Neu Era' has been coined by a lot of people, and it really is," DeVan said. "The stuff we're doing is different, but they've done a good job buying in. I'm really excited to see the product we put on the field."

By Zach Gonzalez / 23 hours ago