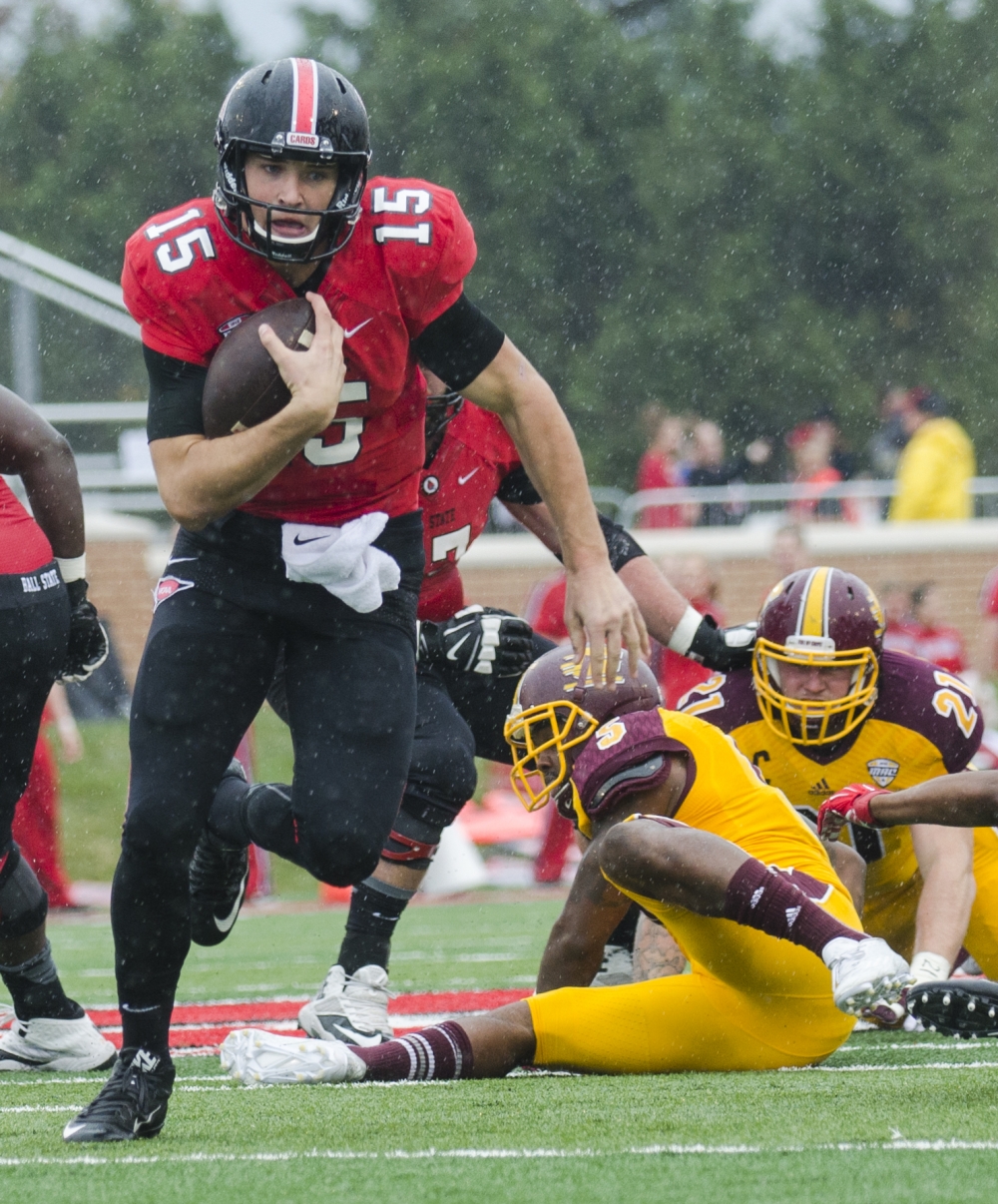 Sophomore quarterback Riley Neal finished fifth in the country among in passing yards among all freshmen quarterbacks last season. Neal and the Cardinals will open the season Sept. 2 at Georgia State. Breanna Daugherty // DN File

Riley Neal couldn't end on that one.

Nine days separate Ball State from the 2016 season opener against Georgia State, but that didn't stop the Cardinals' sophomore quarterback from getting some extra work in after practice on Aug. 23.

"Throw it back," Neal said after he left a touch pass short of the goal line, causing receiver Cywettnie Brown to break stride in order to make the catch. The next pass? Perfect.

After starting nine games as a true freshman a year ago, Neal is atop the depth chart following the team's fall camp. He's looking to build on a season where he finished fifth in the country in passing yards among freshmen quarterbacks.

"He's matured," first-year coach Mike Neu said. "He's got nine games under his belt as a starter, and that's quite a few snaps when you're a true freshman. He's had a very good spring, and he's carried it into the fall. You can see his confidence level growing."

The work hasn't stopped for Neal, despite all the changes since last year. He's got a new coach, a new offensive line and some new receivers to throw to.

But running out with the first team every day hasn't changed his approach to the game.

"In terms of how comfortable you are with the offense and playing the game, it's definitely changing," he said. "But you just come out with the same mentality, no matter where you are on the depth chart really."

Neal and second-string quarterback Jack Milas received most of the snaps in practice. Behind them is redshirt sophomore David Morrison, redshirt freshmen Zack Blair and true freshman Drew Plitt.

Milas started the first three games of last season before Neal replaced him in the first quarter of a 28-17 road victory over Eastern Michigan. The Yorktown, Indiana product completed 58.3 percent of his passes for 2,276 yards and 16 touchdowns as the starter for the rest of the season.

With a new offensive system in place, Neal should have even more chances to make plays with his arm and his legs.

"Riley is a good fit for college football in general," Neu said. "You talk about his size and arm talent, but he's got good mobility. All of the sudden a play breaks down, he's able to extend the play and get some extra yards with his feet if he pulls it down and runs. We're fortunate to have a guy with that kind of mobility."

Neal's expectations as the starter are pretty simple: improve on last year's 3-9 finish. He said he wants to limit turnovers, make plays where he can and do whatever it takes to put the offense in a position to win some games.

He has a little over a week left to perfect that touch pass before running out with the starters in the season opener against Georgia State on Sept. 2.

"I see a little bit of a chip on his shoulder," Neu said. "You like to see that at the quarterback position, because it's all about confidence and being able to lead the guys around you."

By Zach Gonzalez / 21 hours ago