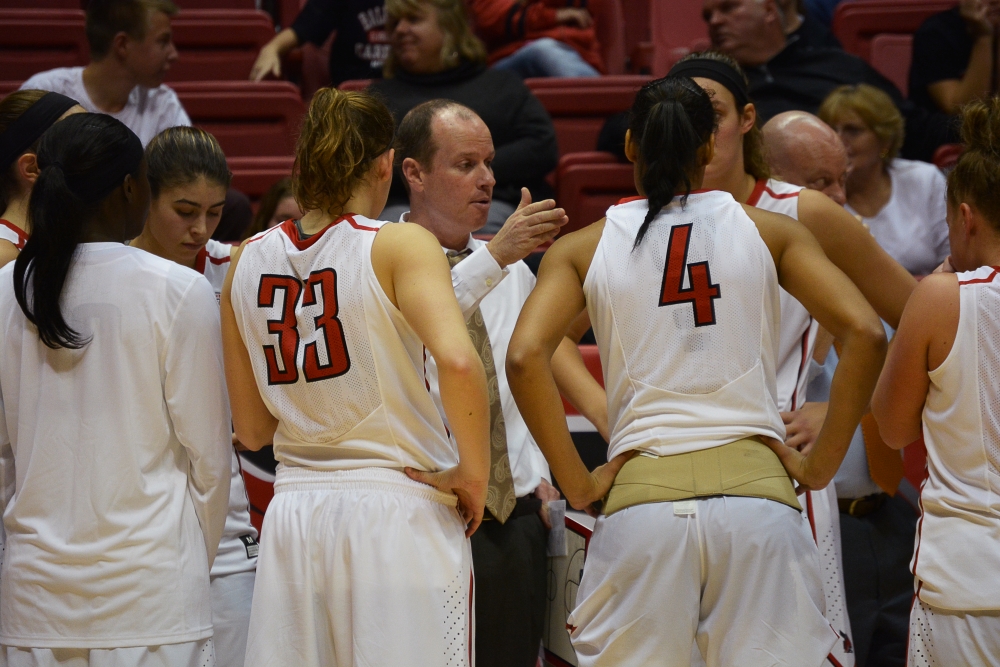 Ball State women's basketball lost its second home game of the season against Central Michigan 74-65 after struggling in areas the team normally excels at.

Three-point shooting is one of those areas. On the season, senior guard Jill Morrison is averaging a .364 shooting behind the arc while sophomore forward Moriah Monaco is shooting .322.

Tonight, the duo combined 1-14 from long range, Morrison hit her first 3 with 50.5 seconds remaining in the game.

Head coach Brady Sallee pointed to the team's lack of resiliency and effort.

“I saw a lot of things out there that we stress day in and day out," Sallee said. "Tonight was the reason we've been stressing them all year long."

The 3-point game also affected the Cardinals on the defensive end. This season, Ball State only allowed teams to convert on 30.7 percent of its shots from behind the arc; Central Michigan hit 43.5 percent.

Sallee again pointed to the lack of effort he saw, which allowed Central Michigan to make a high percentage of its shots.

“We played in those games where we haven't made shots before but we haven't been this paltry on defense,” Sallee said. “That's where you go back and watch the film and say, 'OK, was that effort-related, or was that somebody not showing up?'”

The Cardinals also struggled with fouls, getting their key players in foul trouble early.

Junior center Renee Bennett picked up her third foul within the first few minutes of the second half, while senior guard Nathalie Fontaine picked up her fourth personal foul early in the fourth quarter.

This limited both of the starters' time on the floor.

Coming into the game, Ball State was 11th in the country in fewest fouls per game with 14.9. They earned 22 team fouls during the game.

Sallee scratched his head trying to figure out why his team performed so out of character.

“[Bennett] going out of there with some silly ones hurt. We need her in the game,” Sallee said. “Can I talk about it? Yeah. Can I explain it? No.”

Even with the team's struggles, Fontaine recorded a double-double with 29 points and 14 rebounds.

Fontaine was frustrated losing even after her performance.

“I told them after the game we can't come out like this any more, and that starts tomorrow in practice.” Fontaine said.