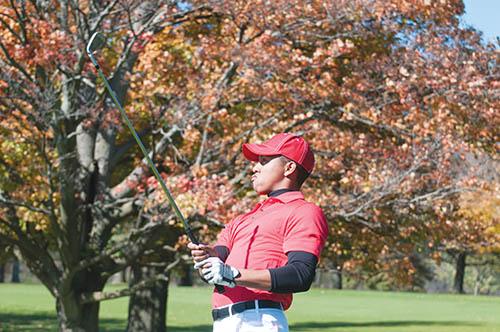 Albert Jennings takes his shot at the Delaware Country Club in Muncie, during the Earl Yestingsmeier Invitational on Oct. 16. The men’s golf team will be playing in the NCAA Regional this week in Pullman, Wash. DN FILE PHOTO BOBBY ELLIS

The tournament will comprise of three rounds over two days. The bracket format will have a first round, a semifinal and a final. The teams are seeded one through eight and will get a chance to play all three rounds.

The tournament, formerly known as the Mid-American Conference Match Play, is now in its fifth year and is named for the late Ball State golf coach Earl Yestingsmeier. Yestingsmeier was nominated to the Ball State Athletic Hall of Fame, The Golf Coaches Association Hall of Fame and the Indiana Golf Hall of Fame.

Head coach Mike Fleck is confident in the team and thinks the format of the tournament will only help the team, especially coming off of the offseason.

“If you lose a hole, or if you make a bad swing or if you have a bad hole you can let it go and get back on it the next hole,” Fleck said.

Ball state is seeded at No. 7 out of eight teams and will be playing No. 2 Notre Dame in the first round.

Fleck also thinks the clearness of the goal is helpful to his team.

“We just need to figure out a way to win three matches and [split] one, which means we don’t have to be perfect, we just need to be whole," Fleck said.

The other matches include matchups between No. 3 Toledo and No. 6 Dayton, No. 1 Miami and No. 8 Ohio, and No. 4 Xavier and No. 5 Eastern Michigan. The field consists of teams all from around the same geographic area so none of them have been able to avoid the cold winter and enter in similar positions.

Watts is coming off some successful tournaments in the fall and is the reigning MAC tournament champion.

“Quite honestly, we’re going to rely pretty heavily on him as we move through the spring as far as the success of the team,” Fleck said.

The team is feeling good and looks to capitalize on the green time they had from the unusually warm winter.