Final Scores on the Road: 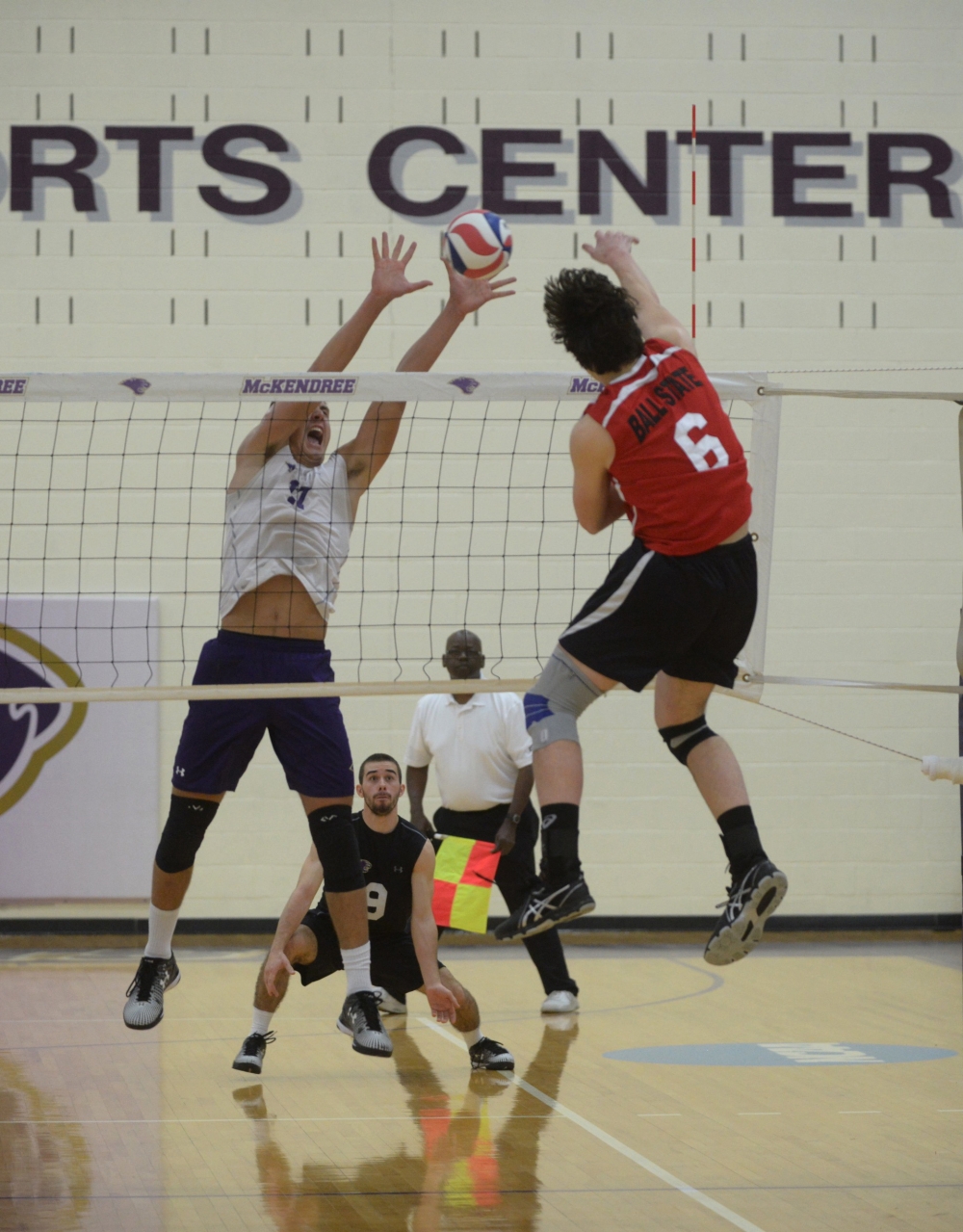 The Ball State Men’s Volleyball team traveled to McKendree University on Feb. 5in Lebanon, IL. The Cardinals won in five games, after coming back from a two game deficit. DN PHOTO ALLISON COFFIN

During a five-hour bus ride to McKendree University, a brown blanket stretched across the aisle between four seats, forming a makeshift card table for four Ball State men's volleyball players.

This was the third road trip for the men's volleyball team in the past three weekends, two of which included 10+ hour trips to the East Coast.

“We play a lot of cards,” Niemczewski, a senior outside attacker, said. “A lot.”

Each time a teammate had to pass through the aisle, they stepped on the seats — and occasionally a teammate’s legs — to avoid disturbing the game.

The drive to Lebanon, Ill., was nothing for the team.

The weekend before, they drove 10 hours to play at New Jersey Institute of Technology (NJIT), and then George Mason University. The Cardinals were able to beat NJIT, 3-0, and George Mason, 3-2.

However, the team’s first two travel matches of the season didn’t go as well. It was a seven hour trip to Penn State and Saint Francis University, where they got stuck one extra night, courtesy of winter storm Jonas. The team lost to Penn State, 0-3, and to St. Francis, 2-3.

“[The travel] isn’t an excuse to not perform well, but it is tiring,” said senior setter Hiago Garchet.

Long bus rides do give Garchet a chance to get some sleep, though.

“There’s some stuff to be talked about, but you can’t keep a conversation going for 14 hours,” he said. “It’s tiring, but the buses are nice, so I don’t mind it.”

For the five-hour trip to McKendree, even some of the coaches were passed out on the floor of the bus, resting on cushioned mats. And red-shirt junior outside attacker Edgardo Cartagena was spread out flat on his stomach on the floor in the back of the bus, feet sticking out into the aisle.

It’s certainly not easy for a team of more than 20 coaches and players ­— most of whom are 6’4" or taller — to get comfortable in the small bus seats. Sophomore middle attacker Matt Walsh had to curl his 6’11" frame into his seat, pulling his legs up into his chest to fit.

“After being in the bus for a long time, we get a little weary,” said Adam Wessel, a freshman libero. “I didn’t think travel would have an impact, but I’m finding it does.”

Matches across the country that involve a lot of travel can make the players stiff and tired, not to mention the absence of home-court advantage. 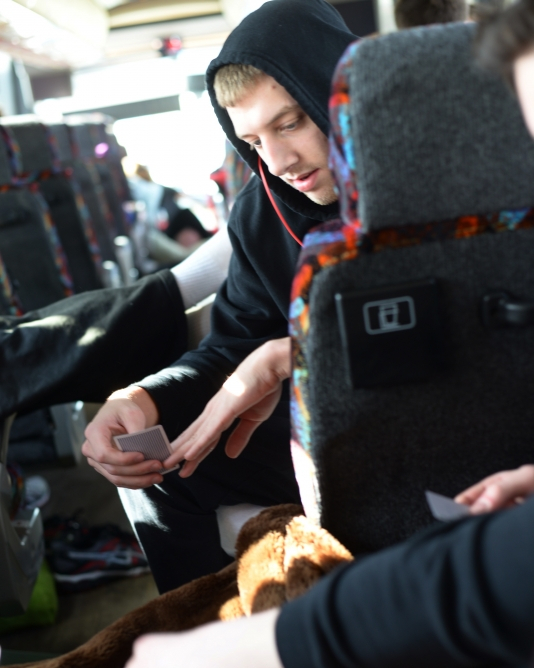 The Ball State Men’s Volleyball team traveled to McKendree University on Feb. 5 in Lebanon, Ill. The team spent the five hour ride talking and playing card games on a makeshift table made of a brown blanket. DN PHOTO ALLISON COFFIN

“I had to get used to the fans cheering against us instead of for us,” Wessel said.

But even without the friendly crowd, the team has managed to make traveling fun.

About an hour away from McKendree, the team got a laugh when head coach Joel Walton announced a quick pit-stop at Walmart.

The players didn’t know what was going on as the bus pulled into the parking lot. They took their headphones out, starting to guess what they had stopped to get.

“Are we picking up Joel’s grandma?” one player shouted.

It only took a few tries before someone guessed right: Walton had forgotten a belt and needed to buy one before the match.

While the mood on the bus was relatively lighthearted, the team had to get serious once they pulled up to the gym. McKendree was the team's first Midwestern Intercollegiate Volleyball Association conference opponent.

The Cardinals' fatigue from three straight weeks on the road showed after they dropped the first two games.

“It’s frustrating,” Walton said. “We’re not starting very well. When the team is against the wall, we can show we want to fight, but we need to make sure the guys get warmed up and prepared.”

“We had to battle for the match,” Walton said. “There’s an added pressure, and you have to be able to still function and still be able to play. But they were doing anything they could to keep the ball going, making spectacular plays and dives.”

On the bus after the win, the players were still feeling the match adrenaline. But shortly following a team meal, the small overhead lights on the bus began to slowly fade as the tired team nodded off one at a time for the ride back to Muncie.

The bus arrived back on campus around 5 a.m., with a much-needed day of recovery ahead. One more match against Ohio State University on Feb. 6 capped off six straight matches on the road.

But traveling is a part of being a collegiate athlete.

“It’s just something we have to work through and overcome,” Walton said.

During the match against No. 7 Ohio State, Ball State started off the same, dropping the first two sets. The 15th-ranked Cardinals were able to pull off the upset win over the Buckeyes after taking the next three sets and winning 3-2.

The team will begin a six-match home-stand on Feb. 11 against in-state rival IPFW.

By Elvin Cesareo / 4 hours ago

Western Michigan was able to score two goals in the final 10 minutes of the first half to defeat Ball State 2-0. 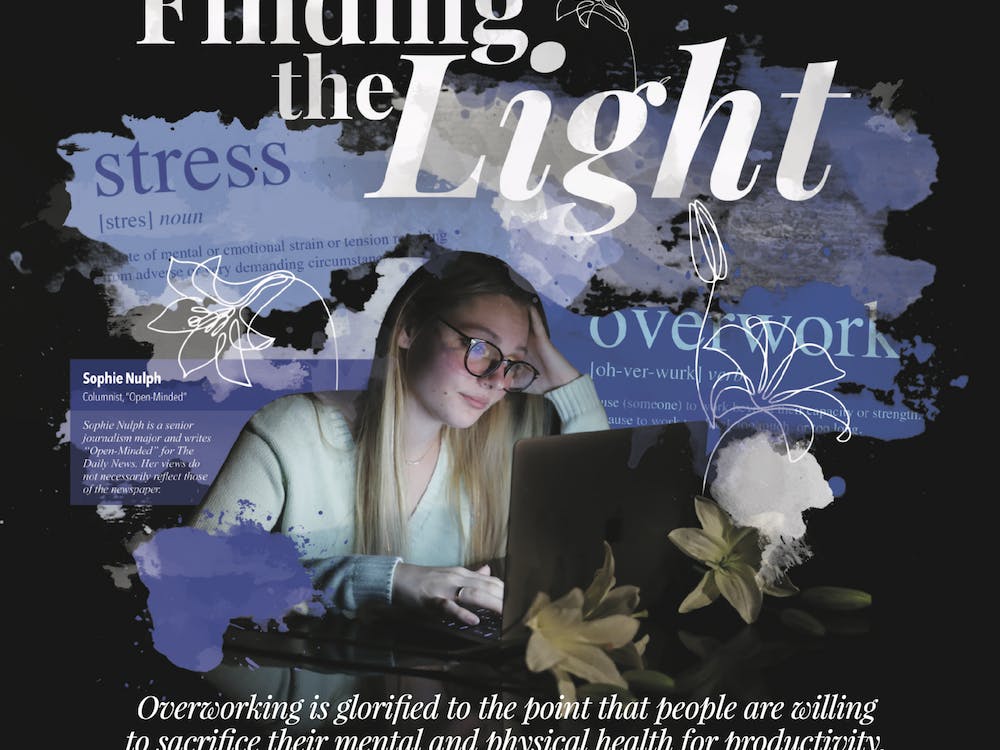 By Sophie Nulph / 23 hours ago

The consequences of overworking need to be normalized, not glamorized.