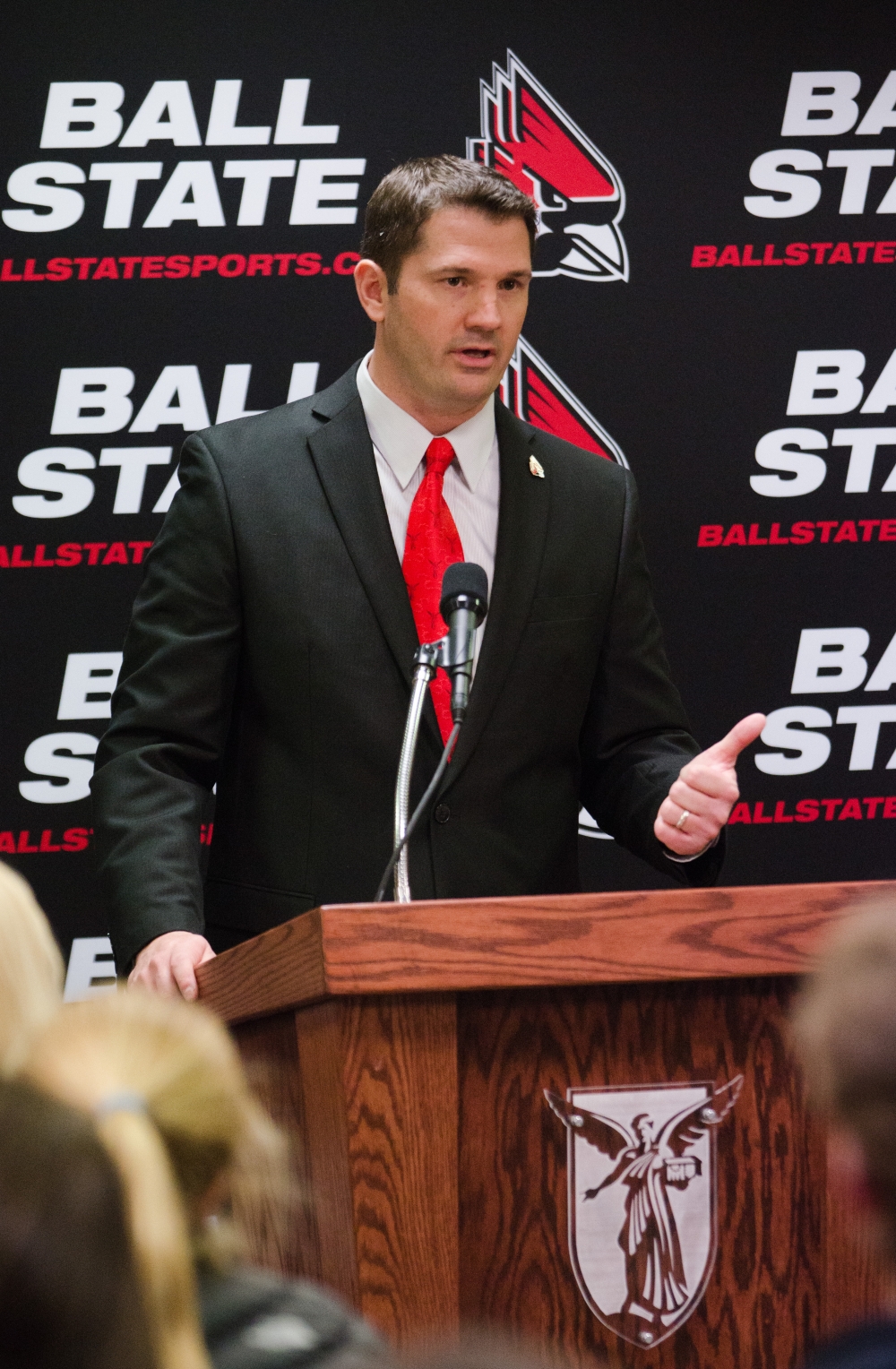 Ball State football coach Mike Neu has been here before.

He’s originally from Indianapolis. He was a record-setting quarterback at Ball State in the early ’90s. And now he’s back as the 17th head coach in program history.

Neu was hired on Jan. 7 to take over for former head coach Pete Lembo. Lembo resigned to become the assistant head coach and special teams coordinator at the University of Maryland.

Neu is an emotional guy, he revealed during his introductory press conference on Jan. 8. He didn’t get to see his family very often when he worked with the New Orleans Saints. His return to Muncie allowed him to reunite with his family and catch up with some former teammates and alumni in the process — all things that make his homecoming a little bit sweeter.

“For me to come back here and have an opportunity to be the head coach at a place where I went to school, … what a great opportunity,” Neu said.

Neu graduated from Ball State in 1994. Following his college days, he kept working his way south. He’s had jobs in Tennessee, Georgia, North Carolina and Louisiana.

On that stop in Augusta, Ga., Neu met his “rock star” — his wife Charmin. He said during his introductory press conference Charmin is a big part of his success due to the sacrifices she makes.

In addition to being a “super mom” to their three kids — daughter Graycen, 15, and sons Carson, 13, and Chase, 5 — she’s helped bring Mike’s career full circle, from the Arena Football League to the National Football League and now back to Ball State and the college ranks.

Mike has 15 years of coaching experience and has experienced some nice success during his time on the sidelines.

“My dad’s the boss,” Chase said during the press conference after raising his hand to speak. “And he’s the best at football, and I love him.”

In addition to the connection with his immediate family, Mike also has relatives living in the Indianapolis, Carmel and Fishers areas. He said he’s excited to be able to get back with them after a long time away from the state.

“You always lean on family in adversity and tough times, and there are going to be tough times and there’s going to be adversity,” he said. “But I’m fortunate to have that support system. I love them. I miss them. … So, it’s exciting for me.”

The energy was evident the minute the rumors of Mike’s hiring started swirling. No one said his new job would be easy, however.

Ball State is coming off a tough year, where it finished just 3-9. It was the team’s worst record under former coach Pete Lembo, who resigned to become an assistant coach for Maryland in the Big Ten.

But Mike doesn’t shy away from his goals. He wants to lead the Cardinals to success on and off the turf at Scheumann Stadium.

“I want to develop great, young student-athletes that become great men,” he said. “When they leave this institution, my goal would be for them to have a [Mid-American Conference] championship and to become a better man.”

Ball State President Paul W. Ferguson said Mike’s commitment to the development of student-athletes, along with fan engagement and career experience, are part of why the alumnus’s name rose to the top of a list of more than 50 candidates.

For Mike and Ball State, the match and connection were just right.

“I think we have been able to hire the right person at the right time,” Ferguson said. “It’s right for him and his family. … Welcome home, it’s back where you belong.”

As he was arriving back to Muncie for his press conference on Jan. 8, Mike couldn’t help but think about the last time he was on a football field at Ball State. A four-year starter and record-breaking passer, he led the Cardinals to a win over Kent State and a MAC title.

And after his busy day in Muncie meeting with family, former teammates and alumni, he had a reassuring message for all the faithful Cardinals that came to hear him speak.