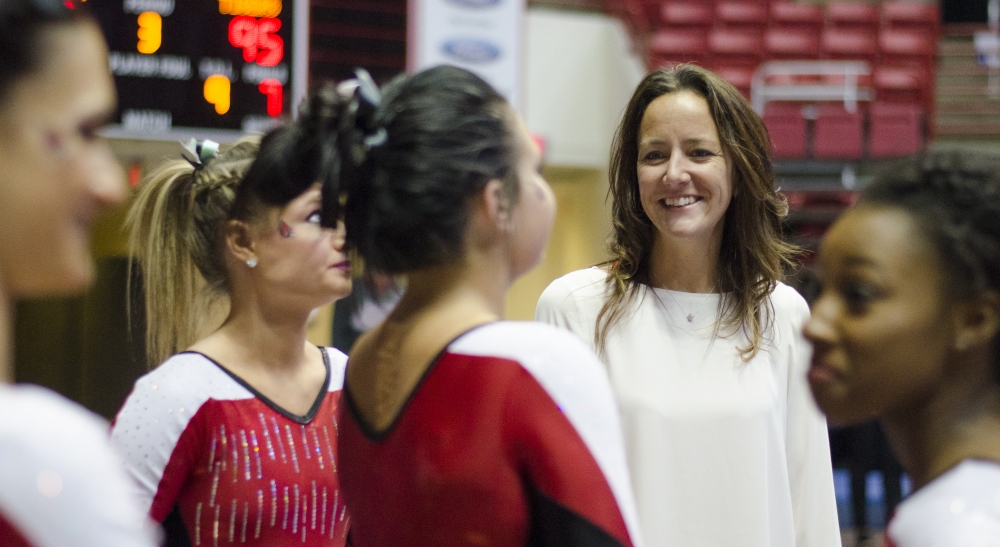 Head coach Joanna Saleem talks to some of the gymnasts in between events during the meet against Townson on Jan. 17 at Worthen Arena. DN PHOTO BREANNA DAUGHERTY

Coming into the match, Ball State was ranked 50th in the country, while Towson was 42nd. The underdog Cardinals were able to take down the Tigers with a final score of 194.100-192.550 for the team's first victory of the season.

The meet opened on vault, where the Cardinals snagged the top three overall scores and a total of 49.700.

The Cardinals then moved to the uneven bars, scoring 48.050 points behind Penny's 9.775, senior Katie Honarmand with a 9.700. The duo finished in second and third places respectively, while Towson's Tyra McKellar came in first with a 9.825.

Ball State continued its momentum onto the balance beam, with a 48.575 overall. Christian finished on top with a 9.825, Penny followed in third place with a 9.750.

Holding a slight lead, the Cardinals moved onto the final event with the floor exercise.

Freshman Sydney Finke led off for the team, scoring 9.750 on the way to her second place finish which tied with Ebeyer.

Christian finished in first a 9.825 and another dominant performance.

The team's performance was enough to move past Towson for its first victory of the season.

The Cardinals travel to Illinois on Jan. 22 to take on Illinois State and Lindenwood.

Ball State will return home on Jan. 24 to face off against Illinois State and Eastern Michigan, for the team's first conference meet of the season.