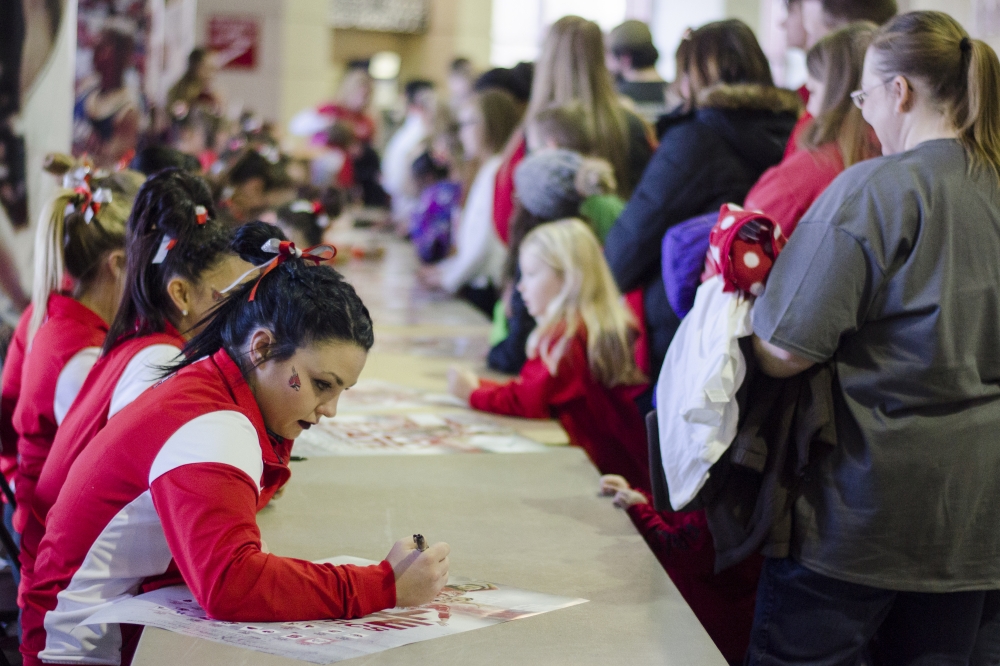 The team now performs at Worthen Arena, like many other athletic teams at Ball State.

“I was hoping that when we got down there, we would have more of an event-type atmosphere, and that has definitely happened,” head coach Joanna Saleem said. “You can turn the lights off and [make use of] the spotlights. I love that it is fun for the crowd to be able to participate. It is important for the fans to enjoy the event and want to come back”.

Last season brought in record-breaking numbers for the Cardinals. In the 2015 season opener, the team drew in 1,564 spectators, leaving nearly 1,000 fans without a seat.

Irving Gym only accommodated 600 people, which had previously worked as the team's old averages were 500-600 fans per meet.

Drawing a continuous increased attendance throughout the season, the gymnastics team needed to relocate to allow for more spectators to comfortably attend the team's meets.

After undergoing a total floor resurfacing over the summer, the Ball State gymnastics team was able to finally call Worthen Arena its new home. Worthen Arena accommodates up to 11,500 spectators, and allows the team to interact with the fans through the use of video boards, lighting and music. Saleem said the new location creates an overall exciting environment for everyone.

Senior Denasiha Christian stressed the importance of the fans.

“We’ve always been told that the younger girls may want to be college gymnasts, so it’s a really big honor to have fans that look up to us," Christian said. "So we do it for them.”

The gymnasts have been pleased as they continue to build a bigger fan base because fans play a big role in the success of the team.

“Home meets are the best strictly because of how the fans interact," senior Erin Patchey said. "We love when they are loud. We love when they cheer. It is cool to look up when you are down on the floor and see a wall of fans."

Already off to a strong start to the season with a 2-1 record at home, the team believes the extra room will be especially beneficial in preparing for the Mid-American Conference championships in March, where the Cardinals will host six other conference teams in Worthen Arena.

“We have a little bit more space down on the competition floor," Saleem said. "It’s going to make it so much easier when it comes to MAC because we are going to have already competed in that venue, which is nice.”

Ball State is on the road until Feb. 14, when they return home to host a quad-meet against Kentucky, Kent State, and Lindenwood.

By Indiana Capital Chronicle / 4 hours ago

By Associated Press / 11 hours ago