No. 2 Western Michigan vs. No. 3 Buffalo 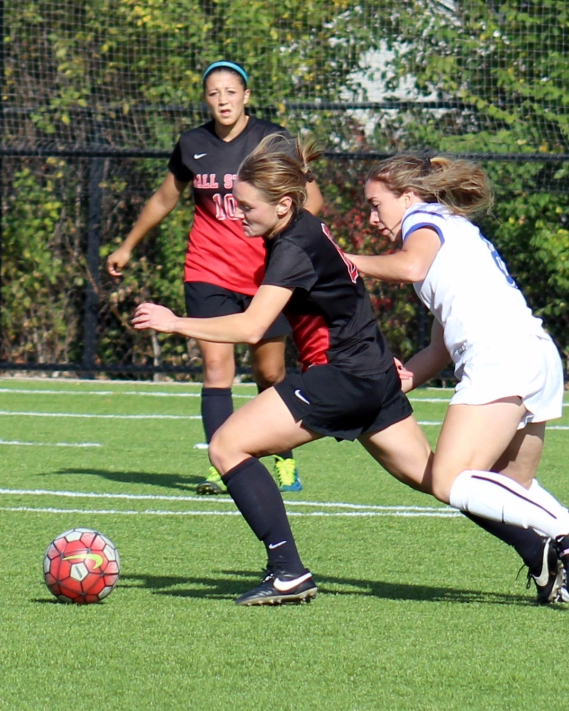 A Ball State soccer player attempts to keep the all away from her opponent in the match against Buffalo on Oct. 25 at the Briner Sports Complex. DN PHOTO ALLYE CLAYTON

The Cardinals remained scoreless through regulation and two overtime periods, but eventually fell to the Zips in penalty kicks.

Head coach Craig Roberts understands how soccer is sometimes, and the Cardinals just weren't able to take advantage of the opportunities in the match.

“Soccer is a tough game,” Roberts said. “Soccer can be a fun game, or it can be a very cruel game. We had our chances but couldn't capitalize.”

This was the second match against Akron for Ball State within a week-and-a-half. During the regular season, the Cardinals beat the Zips 1-0.

During the quarterfinal match, the Cardinals stayed true to who they have been all year: a pesky defense that created opportunities on the offensive side.

Ball State took 23 shots in the game, 16 of which came in the second half, while holding Akron to only three shots, two of which were on goal.

With no score after regulation and playing two 10-minute halves, the game was to be decided by penalty kicks. The Zips converted on four of five shots and the Cardinals only converted on three of their five shots, allowing Akron to move on.

“We had opportunities to score the whole game,” Roberts said. “We didn't convert on any, and it proved to cost us at the end.”

The Cardinals wanted to end the game during regulation. With less than 10 minutes left in the game, Ball State changed its offense up. All year, junior defenseman Lorina White played on the back line, coming up to the offensive side sparingly.

Roberts moved White up to the offensive front half to create more opportunities as the game came to an end. This allowed the Cardinals to gain an advantage on corner kicks 13-1. Ball State created four shots off a late corner but couldn't convert as the ball was cleared.

Ball State dominated the MAC throughout the regular season, losing only one time to Western Michigan.

“We were the most consistent team in the MAC,” Roberts said. “It takes a lot to win the regular season outright. I’m proud of how this team has developed and all the accomplishments they’ve made.”

This year was one to remember for Ball State. It went on an eight-game win streak, which tied the school record set back in 2007, which was also the last year it won the MAC regular season title. The Cardinals set the record for most conference wins and went undefeated at home during the regular season.

By Ashton Connelly / 13 hours ago

By Grayson Joslin / 15 hours ago