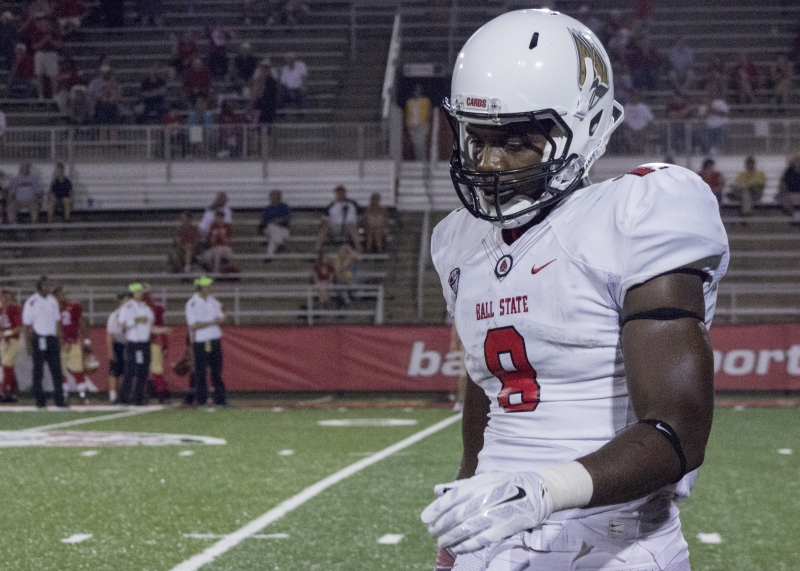 Senior wide receiver Jordan Williams walks off the field after a play during the football game against Virginia Military Institute on Sept. 3 at Schuemann Stadium DN PHOTO MAKAYLA JOHNSON

The lack of competition was clear at halftime, as No. 16 Texas A&M held a 49-3 lead over Ball State. This is called a "guarantee game."

Mid-major schools, like Ball State, are paid to play higher-ranked opponents in games they are assumed to lose. The Cardinals played their part this weekend by taking a 56-23 beating from the Aggies.

In 60 minutes, Ball State earned more than $1 million — not bad for the athletic department.

"The games from teams in the Power Five conferences are a major component for your revenue projections for the year," Ball State Athletic Director Mark Sandy said. "When you take away how much it costs to get the team down there, you're still in range of net revenue for the athletic program in general."

The risk of injury goes up substantially when a mid-major school like Ball State faces off against a team from the Southeastern Conference. Senior Ball State offensive lineman Jeremiah Harvey was hurt during the Cardinals' first possession.

"We are sacrificing our kids and letting them get their butts kicked in order to make more money for ourselves," he said. "We need to look at ourselves in the mirror and we have to realize who we are and that it's okay competing against schools we can compete against."

Ridpath has years of experience in college athletics both as a coach and professor. While a $1.2 million payday may seem like a big deal, he said, it's not. Not for Texas A&M and not for Ball State.

"Texas A&M fills their stadium every game; a home game for them is huge," Ridpath said. "$1.2 million is nothing for them."

Sandy said some good comes from playing top-level competition during the regular season.

"We want to be able to say on any given night we can compete with anyone, and when you do that it becomes a recruiting tool," Sandy said. "When you're on national television and you play well against a Power Five school it looks good on recruiting; ... people get excited about your program and [it] helps you recruit better players."

Recruiting is just one aspect of guarantee games.

Head coach Pete Lembo has to consider how much cash the athletic department stands to gain, how many losses he can afford outside of conference play and the overall experience.

The financial disparity between MAC schools and Power Five schools is huge and will only continue to grow. According to USA Today, the Aggies brought in about $118.2 million last year after subsidies, compared to the Cardinals' approximate $6 million total.

About 70 percent, or approximately $13.3 million, of Ball State's total athletic budget comes from the student services fund each year. That fund is made up of money collected through mandatory tuition fees each semester.

This season, Ball State athletics is receiving $1.9 million in guarantee games, the second biggest source of income in the budget. They will face off against Big Ten opponent Northwestern in just two weeks, looking for different results.

Teams like Texas A&M frequently play on major networks, but getting an ESPN spot is a big deal for Ball State.

"It's important to be on ESPN3, but when you're on ESPN2, ESPNU, or ESPN and you're on the national level on Saturday during primetime, it sends a message that Ball State can play at the highest level of football," Sandy said.

Guarantee games aren't going away any time soon for schools like Ball State. The money means too much to mid-major programs. As for the wins? Ball State will look for those in conference play, which kicks off Sept. 19 against Eastern Michigan.