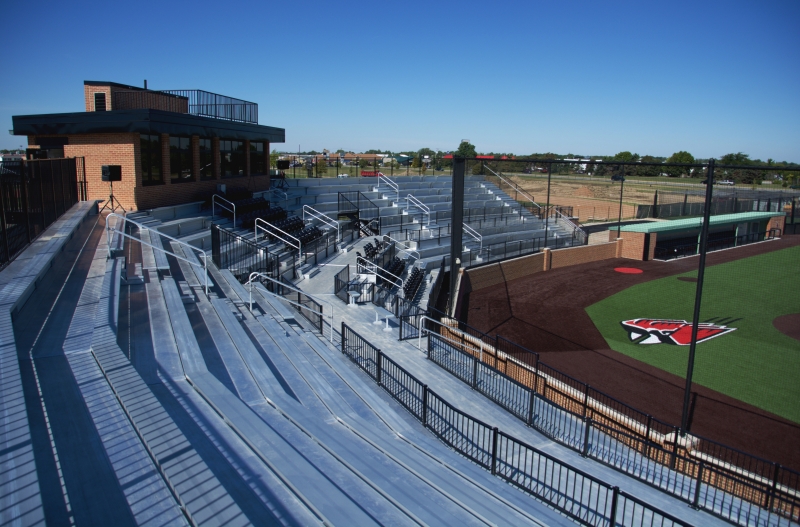 Ball State will spend more than $1 million will be spent on renovations for the First Merchants Ballpark Complex. The Ball Diamond started renovations in late May to update the grandstands. DN PHOTO SAMANTHA BRAMMER

The complex is home to both Ball State's baseball team and its softball team. Ball Diamond began renovations in late May last year to update its grandstands.

The renovation was set in multiple stages, and athletic director Mark Sandy said it is nearing the end of the final stage in the project.

“The stage we’re doing now, which is dugouts for softball and the press box and seating for baseball, that’s what we’re calling stage three,” he said. “That came from the fundraising, the Cardinal Commitment that was just finished—and that portion is a little bit more than a million dollars.”

Renovations to the complex are just a small portion of the $20.6 million fundraising effort which will benefit nine of the athletic organizations on campus.

Although the renovations may cost a pretty penny, Sandy said, those pennies will not be coming from ticket sales at the complex, at least for now.

“For this coming season, everyone’s admitted free and seating is first-come, first-serve,” Sandy said. “We might have a space reserved for professional scouts, getting them a proper place so they can use the radar guns and all that."

Sandy also sees plans for the chair-back seating being used for season tickets or reserved seating down the road.

Behind home plate, 60 stadium-style seats were installed. Sandy said more may be added in the future, saying “we can expand as needed.”

Much like Ball Diamond, the softball diamond has also been improved as they replicate the changes happening on the baseball diamond.

“Their [softball's] part of phase three is new dugouts, like baseball received last summer,” Sandy said. “So they have brand new dugouts and they have a new field as well. Then the next phase for them will be the press box and seating. It’s sort of like the one is mirroring the other, so eventually the two facilities will be very, very similar.”

Future plans also include an indoor practice facility that can be used in the winter.

The updated facilities look to serve as a recruitment tool, as well.

“When you have indoor hitting and a practice area as a northern school in baseball, it just changes what people think about your program and which student-athletes you can attract,” Sandy said.

The softball team used its new dugouts last weekend in its fall opener against Huntington University. The baseball team will debut its grandstands on Oct. 2, when it takes on the Ontario Blue Jays.

As both teams begin playing in the spring, Sandy said he thinks more fans than usual will attend because of the renovations.

“I don’t think there’s any question that a new facility not only helps with recruiting, but it brings more fans out to see what it’s like," he added. "With the other amenities, the new restrooms, new concessions and things like that, it’ll definitely draw more people to the game and create more excitement.”