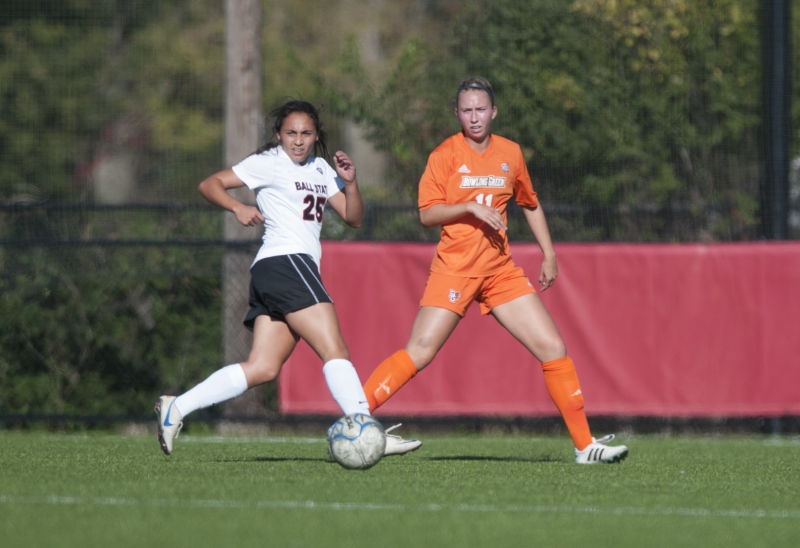 Ball State’s soccer team won the quarterfinal match against Kent State for the Mid-American Conference Nov. 2. Junior midfielder Elaina Musleh admitted she struggled this season before the match, but she scored twice within the 15 minutes of the second half. DN FILE PHOTO JONATHAN MIKSANEK

In its first-ever match against a Southeastern Conference team, Ball State tied LSU 1-1 and impressed head coach Craig Roberts in the process.

“I thought we were outstanding,” Roberts said. “Playing a quality SEC team like LSU is always a good challenge, but our girls stood up there in the heat and produced well.”

The Cardinals finished LSU's Stomp in the Swamp with a 0-1-1 record.

In a high-humidity atmosphere, LSU (4-0-2) challenged first by striking a header off a free kick at the 34th minute, the only goal of the first half. This came after a foul call on Ball State in the midfield.

The Cardinals weren't used to being down at half, but it didn’t seem to add any extra pressure. Senior Elaina Musleh scored off a Leah Mattingly corner kick in the 50th minute.

“It’s about believing in themselves offensively," Roberts said. "We knew we could get at least one on them with our numerous amount of threats on offense."

The teams tied at the end of regulation, and played another 20 minutes of overtime before settling on a draw. Both teams recorded two shots in the extra time.

Ball State’s two shots came in the second overtime. One was blocked and the other flew wide. Although Roberts would've rather came away with the win, he was happy with the effort.

Defensively, Ball State gave up eight shots against LSU and only two on goal.

“Our defensive back line was the best tonight,” Roberts said. “We limited them and gave ourselves a chance to win.”

The defense stood up again in the second match of the weekend, but Middle Tennessee scored in the 70th minute and earned a 1-0 victory.

The offense had its chances, Roberts said, but could not convert. He said his team proved it could play with anyone over the weekend.