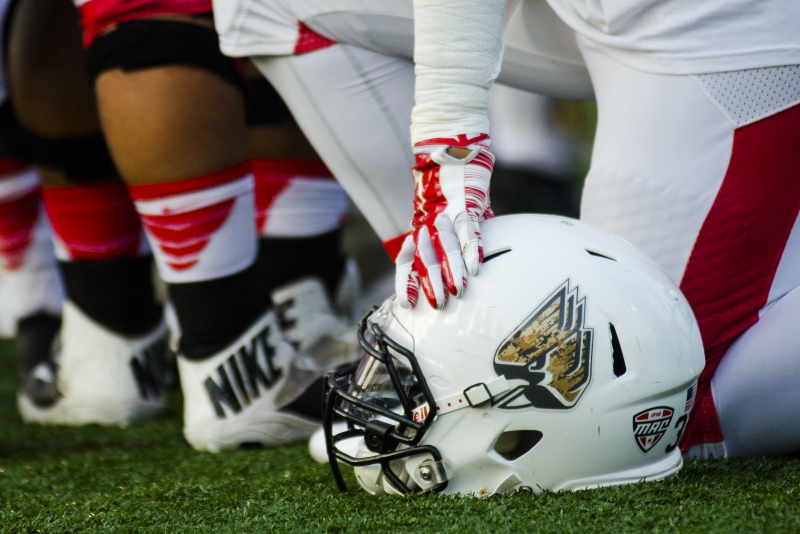 The Ball State football team had helmets honoring the military for the game against Virginia Military Institute on Sept. 3 at Scheumann Stadium. DN PHOTO BREANNA DAUGHERTY

Northwestern mounted an efficient 16-play, 65-yard drive that resulted in a missed 26-yard field goal to keep the game at 24-16 with 11:43 remaining in the game.

After exchanging punts, the Cardinals took over at their own 43 with 8:34 remaining, still trailing 24-16. Ball State drove down past midfield, but punted the ball away again.

Northwestern went three-and-out on its next drive, and Ball State took over at the Wildcats' 39-yard line after a 31-yard punt.

Green picked up 21 yards to the 19-yard line, but three straight Neal incompletions led to a 36-yard field goal to bring the score to 24-19 with 4:34 left in the game.

Northwestern gobbled up most of the clock on its next drive, leaving Ball State with 11 seconds to go 90 yards. The game ended on a penalty, and Northwestern completed the 24-19 win.

Northwestern received the ball to open the second half, and picked up multiple first downs before Thorson connected with Vitale for a 21-yard touchdown. The score gave the Wildcats a 14-10 lead with 12:05 remaining in the third quarter.

After a three-and-out, the Wildcats took over again at their own 20. On a third-and-short, Thorson threw a 21-yard pass to move the ball to the Northwestern 49-yard line. Thorson later found Austin Carr for a 25-yard touchdown to extend the lead to 21-10.

The Cardinals kept their next drive alive with a 15-yard penalty, but it was not enough, as Ball State was forced to punt with 6:25 left in the quarter.

The Wildcats handed the ball off to Justin Jackson, who picked up 62 yards before fumbling out of bounds. The Cardinals stopped them from there, forcing a field goal. With 4:51 left in the third, Northwestern led 24-10.

Ball State answered with a touchdown of its own, as Neal led the drive with his arm and legs. He finished the drive with a 29-yard score to Williams. The extra point was blocked, making the score 24-16 Northwestern.

The Wildcats are driving to end the quarter.

After what looked like would be at least three points for the Cardinals, quarterback Riley Neal fumbled the snap that the Wildcats would recover.

Northwestern quarterback Clayton Thorson's pass on the next drive was intercepted by Tyree Holder. The Cardinals continued their success on the ground with some big runs, but the drive stalled. Hagee missed his second field goal attempt of the game to keep the score 3-0.

The Cardinals' defense continued to slow down the Wildcats offense, forcing a three-and-out to put the ball back into their offense's hands at the Ball State 28-yard line with 8:16 left in the second quarter. They failed to pick up a first down, and Northwestern took over at its 30-yard line.

On the second play of the drive, Thorson threw a 66-yard touchdown to a wide open Tommy Vitale down the middle for a 7-3 lead with 6:20 left in the half.

The Cardinals started their drive off at the 20, working their way down the field, but punted on a fourth-and-4 and pinned the Wildcats at their own 6-yard line.

Thorson fumbled, giving the ball back to Ball State. Neal threw a 22-yard touchdown strike to Williams to give the Cardinals a 10-7 lead that they would take into the locker room.

The Cardinals elected to receive the ball to open the game against No. 17 Northwestern.

After picking up two first downs, the drive stalled and the Cardinals were forced to punt.

The Wildcats fumbled on a third down quarterback keep, and the Cardinals recovered around midfield.

A 14-yard pickup by Darian Green put Ball State just 30 yards from the end zone. The Cardinals pushed the ball 10 yards farther, but would have to settle for a 30-yard field goal by freshman Morgan Hagee. The Cardinals led 3-0 with 9:06 left in the first.

Northwestern had an opportunity to respond with points, but a deep ball that may have gone for the touchdown was dropped. The Wildcats later found themselves in a third-and-5 situation but failed to move the chains. On the ensuing fourth-and-1, they elected to go for it but were stopped for a turnover.

The Cardinals took over from their own 40 with just under six minutes left in the first quarter. The Cardinals faced a third-and-long but a 33-yard catch by Jordan Williams kept the drive alive.

After picking up a few more yards, the Cardinals attempted a 43-yard field goal that would come up just outside the uprights. The Wildcats took over with 3:33 remaining in the first quarter.

The Cardinals' defense forced a quick three-and-out to give the offense the ball back at its own 29-yard line.

After a big run from James Gilbert, the Cardinals are facing a first-and-goal from the 4-yard line at the end of the first quarter.