* The teams will also meet on Sept. 20 in Birmingham, Ala. 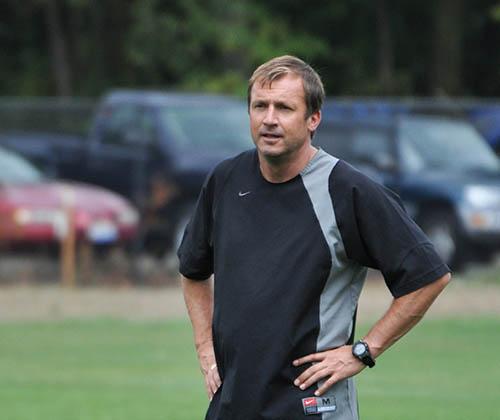 Women’s soccer coach Craig Roberts watches over a drill run during practice. In his time at Ball State, Roberts has been able to get international teams from Canada and Haiti on the spring schedule. DN FILE PHOTO KELLAN DEAM

Roberts also serves as an assistant coach for the Haiti National Team. Thanks to an opening in the Cardinals' schedule and an issue with an Australian player strike, Roberts and the Haiti team will compete in a friendly match with World Cup champion U.S. team.

“It’s sort of a David and Goliath situation,” Roberts said. “The opportunity came for us, and it is a chance for us to grow as a nation and advance our game.”

Australia was scheduled to play the United States in an international friendly in Detroit at Ford Field. But due to a player strike, the U.S. had to find another opponent.

In addition to serving as an assistant for the Haiti National Team, Roberts was recently appointed head coach of the U17 Haiti women's team.

He is eager to get on the field for a tough matchup. Having the chance to be around some of the best players in the world could help his coaching of the Ball State team.

“Having conversations and being with the highest level of competition, we can use it as a resources for my Ball State players,” Roberts said.

This is the first international friendly between the U.S. and Haiti, though they have played each other four times in qualifying matches — all American victories. Roberts was on the sidelines for the match last fall.

Haiti and the United States will play twice this week, with the second match to occur in Birmingham, Ala.

Roberts will miss the second matchup, however, as he will return to coach Ball State in its next match. The Cardinals wrap up non-conference play Sept. 20 at Morehead State.