Ball State hungry for success after 1-1 start to season 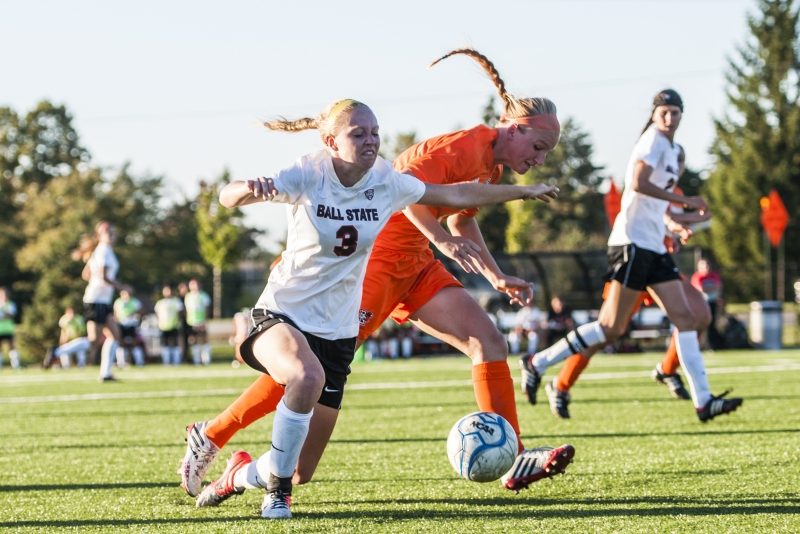 Sophomore defender Leah Mattingly stumbles after the ball during the game against Bowling Green on Sept. 26 at the Briner Sports Complex. DN PHOTO JONATHAN MIKSANEK

After two straight 11-win seasons and coming up one game short of the Mid-American Conference Championship last year, the Ball State soccer team is hungry for more.

The Cardinals' 1-1 start this season has head coach Craig Roberts ready to see his team take the next step.

“We were deeply disappointed last year after the Buffalo loss," he said. "But there is a deep hunger inside of us to get one step closer this year."

Roberts is focused on his team getting better each day rather than setting long-term goals. A MAC title is the ultimate goal, but he knows improving every day is what will elevate his team.

Starting goalkeeper Alyssa Heintschel returns as a sophomore this season.

“He brings a new perspective to our team, and gives a really good balance between me and my assistant Marcie Klebanow," Roberts said. "He has only been with us for two weeks now but is really starting to mesh with our team."

Ball State has recorded 33 shutouts during Roberts' time, with nine in each of the past two seasons. The Cardinals also added the National Junior College Player of the Year in defenseman Lorina White.

“Their defense was good last year, but making them stronger and perfecting that will make us better,” White said.

The Cardinals have scored four goals in two matches thus far, all coming in a season-opening 4-0 win over Jacksonville State.

With 14 new faces on the roster, there will be a healthy mix of young players and seasoned veterans to push each other.

“[The reserves] are stronger, faster and better," Mattingly said. "There is no drop off when we go to the bench. I have full confidence in them to do their job."

The Cardinals' next match will be on Aug. 28 against Wright State at the Briner Sports Complex.