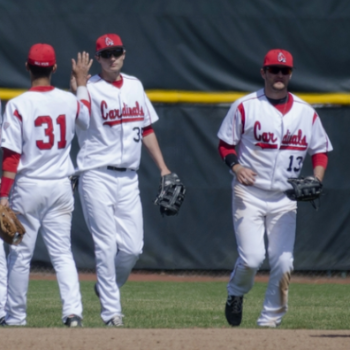 Ball State was undefeated in the Mid-American Conference Tournament prior to Saturday's semifinal matchup with Akron. Leading 8-1 heading to the ninth inning, it looked as if Ball State was headed for a date in the championship with Ohio.

What happened next would be hard for any team to swallow.

The Zips scored eight runs to cap off a 9-8 comeback victory and earned another shot at the Cardinals later that night.

This time it was Ball State facing a battle. Headed to the ninth inning, Akron held on to a 8-5 lead. A four-run rally led Ball State to the win and a berth in the MAC Championship game on Sunday, where it fell to Ohio.

Head coach Rich Maloney said the emotional roller coaster was probably like nothing ever seen in the great game of baseball.

For Maloney and his team, facing adversity told the tale of the season.

A 7-7 start to the season wrapped up Ball State's preseason tournament schedule. The Cardinals then reeled off 10 straight victories, including three to begin league play.

The No. 31 ranked team to begin the season had a hand in winning 16 straight series at one point, Maloney said. Ball State positioned itself in the upper echelon of the MAC standings early in conference play, looking for a second straight regular season title.

Some of the problems began to take their toll on the field, however.

Injuries to key players kept them out of the lineup and forced the Cardinals to play younger players. The inconsistent lineup led to a defeat in five straight series.

"When we had everybody healthy, we went on a 10-game winning streak that started in Florida," senior Scott Baker said.

Two parents of players on the team were diagnosed with cancer, and another died suddenly.

Ball State kept its poise, however, and finished the regular season with a 30-23 record. The Cardinals captured the No. 5 seed in the conference tournament.

“All that stuff, and our kids found a way to grind it out, get into the playoffs despite all these calamities and come awfully close to being able to win this thing," Maloney said.

Ball State won its first two games of the double-elimination tournament against Toledo and Akron. Meanwhile, No. 1 Central Michigan and No. 2 Kent State were eliminated in the first two days.

Ball State hasn't won the tournament title since 2006, but made it to the final game two seasons ago. Last year, the team lost its first two games.

“That’s something we didn’t do very well last year," Baker said. "Once we lost that first game, we were done.”

The championship game against Ohio was Ball State's third game in less than 24 hours after the marathon with Akron. The Cardinals had to defeat the Bobcats twice, but came up short in the first game, 6-2.

“I’m really proud of our guys," Maloney said. "First you win the first two games of the tournament after so many injuries and illnesses. Everything we had throughout the year — so much adversity — to come into the tournament and really play, I thought was pretty outstanding.”

Maloney is looking forward to how his team will bounce back from this season next year.

The Cardinals return almost their entire lineup, and Maloney said he doesn't know a team that returns more players and stars.

“They watched Ohio celebrate, they watched Central get all their awards," Maloney said. "Now they’re hungry. Not that they weren’t before, but now they’re really hungry.”

With a strong incoming class to help the returning players, Ball State is looking to be part of NCAA Tournament play.

He said this season isn't too sad after all the success they've had over the past few seasons.

“It’s an exciting time to be a Ball State Cardinal," Maloney said. "In the three years we’ve been back, we’ve been to two [MAC] tournament finals and we won a MAC championship. We can’t really feel bad about it.”