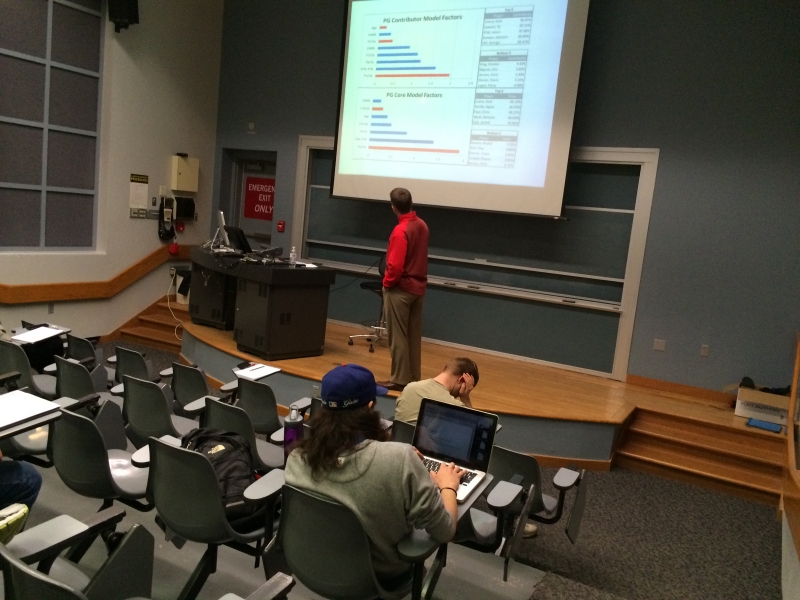 After each game, the Ball State coach gets emailed on/off statistics for the game – how the team performed with certain players on or off the court.

“Somebody charges me $1,250 a year for that,” Whitford said. “I feel like that’s way too much. If we have some students who want to do that work, maybe we can work something out.”

In his presentation on the growth of advanced basketball sponsored by the economics department at Ball State, Whitford began by discussing the difference between points per game and points per possession, using Wisconsin and VCU as examples.

On its face, the basic numbers show Wisconsin has a better defense.

“The true metric for how good you are on defense is points per possession,” he said. “That’s not that deep. It doesn’t specifically tell you where you’re good or bad. It just tells you whether you are good or bad.”

Whitford said the most important defensive statistic for a team is an opponent’s two-point percentage. Because layups are the easiest shot a team can make, the ability to stop them is the most crucial for a team’s defense.

In the last 10-15 years, these statistics have become more prominent in basketball.

Whitford said, as a coach, players will approach him and say “I don’t get the rebound, but I always box my man out.”

Now Whitford has numbers to measure that.

“We should get the defensive rebound a greater percentage when you’re in the game than when you’re out of the game,” he can say to the player.

Whitford has been in an academic atmosphere his entire life. His father, mother, grandfather and great-grandfather were all college professors.

So when John Horowitz, chairperson of the Ball State department of economics, emailed him and asked him to give a presentation for the department on basketball statistics, he couldn’t say no.

“If somebody asks me to present something, to me, that’s what we’re all here for – exchanging ideas and learning from each other,” Whitford said.

In basketball, many strides have been made to advance the game in advanced statistics. But there’s still backlash from some basketball analysts and coaches.

In February, former Auburn and NBA player Charles Barkley made news and headlines in the basketball community by criticizing advanced basketball statistics.

“[Advanced statistics are] just some crap that some people who are really smart made up to try to get in the game ’cause they had no talent,” Barkley said on TNT.

Whitford says coaching basketball is part science, part art. The art part is what the coaches’ eyes see and what they believe when they watch. The science part is the statistics and numbers aspect.