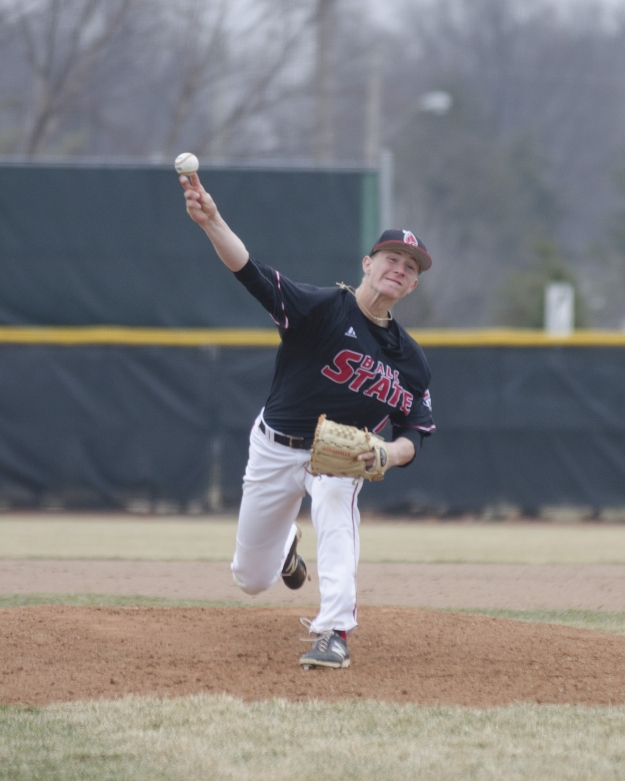 Zach Plesac pitches the ball in the game against Bowling Green on March 22 at Ball Diamond. Plesac was named the National Freshman Pitcher of the Year by the Collegiate Baseball Newspaper. DN FILE PHOTO BREANNA DAUGHERTY

Strong pitching performances over the weekend led the Ball State baseball team to a series victory over Akron and kept the Cardinals in a tie for first in the Mid-American Conference West Division.

The Cardinals gave up five runs in their two victories against the Zips.

“I feel like we got three solid starts out of our pitchers,” head coach Rich Maloney said. “That’s good to see, because that is an area we need to keep working on heading forward."

Sophomore Zach Plesac got the series started off on a strong note with a complete game, 4-1 victory against the Zips. It was the only game of the series where the Cardinals used one pitcher.

Plesac held Akron to a .219 average, while allowing no earned runs or walks. He also recorded seven strikeouts in the game.

Over the course of the next two games, Ball State would rotate seven different pitchers.

Akron's hot offense continued in the series' final game, as it out-hit Ball State 11-6. The Cardinals' work on the mound kept the Zips in check, however, and timely hitting led to a 7-4 win.

Freshman Colin Brockhouse contributed both offensively and defensively, pitching the final 3.1 innings behind B.J. Butler and Trevor Henderson and earning the win.

Akron had 36 hits on the weekend compared to 23 for Ball State, but Maloney said it was enough.

“Our batters were able to get enough hits and when we needed them,” Maloney said.

The Cardinals are now 21-10 and 7-2 in league play. They are tied with the Central Michigan Chippewas at the top of the conference.