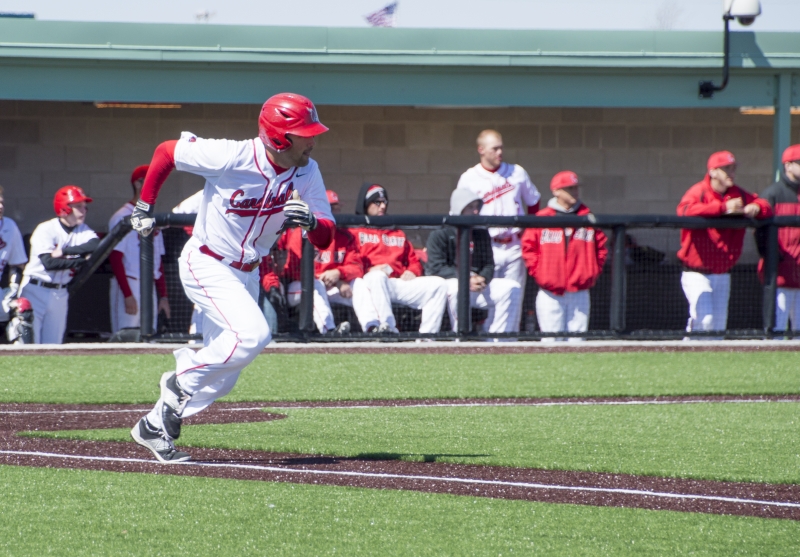 Junior infielder Ryan Spaulding runs to first base after hitting the ball during the first game of the double header against Buffalo on March 28 at First Merchants Ballpark Complex. DN PHOTO ALAINA JAYE HALSEY

"We had won 16 straight series," Ball State head coach Rich Maloney said. "That was an incredible run. The law of averages just caught up with us."

After only needing two pitchers to get through April 11's 4-2 win, Maloney used five different pitchers April 12, starting with freshman Brendan Burns. Burns allowed two runs on five hits in 1.2 innings, and was replaced by B.J. Butler who earned the loss, allowing three runs in 2.1 innings.

As a team, the Golden Flashes outhit the Cardinals 15-7.

Ball State jumped out to a one-run lead in the first on a RBI single from second baseman Ryan Spaulding that scored center fielder Matt Eppers. The Cardinals added another run in the second, when shortstop Elbert Devarie scored on a groundout from left fielder Scott Tyler.

Kent State tied the score in the second inning, but it wasn't until the fourth - where Kent State scored three runs - that the Golden Flashes pulled ahead for good.

The Cardinals' offense came to life in the ninth, scoring five runs, but it was too little too late.

Despite the loss, Maloney was proud of the way his team competed.

"These kids do not quit," Maloney said. "That is all I have seen since I have been here, ... the chances we will have to play [Kent State] again in the [Mid-American Conference] tournament are high."