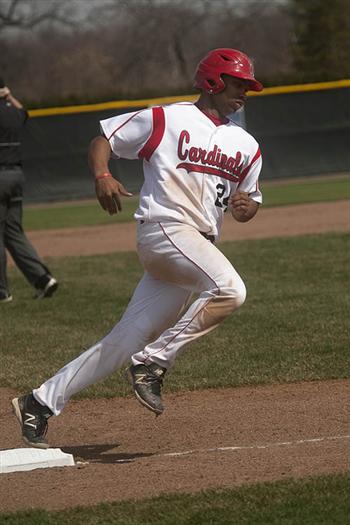 After winning 16 consecutive series, the Ball State baseball team fell twice in three games at Kent State over the weekend.

"We have the whole season ahead of us," Maloney said. "We still have big series coming up with Central Michigan and Toledo."

In its first game against Kent State—a 3-0 loss—Ball State was held scoreless for just the second time this season. The only other team that had managed it prior was Big Ten opponent Illinois.

Ball State managed double-digit hits once in the series, totaling 10 in the third matchup on April 12. A late-game comeback fell just short as well, as the Cardinals scored five runs on three hits in the ninth after entering the inning down 11-2.

"We got to see [Kent State's closer Zach Willeman] for the first time today," Maloney said. "We were able to get five runs off of him, which was good to see."

Ball State was outhit 23-28 in the series, allowing 15 hits to Kent State in the final game. The Cardinals outhit the Golden Flashes in their only win, a 4-2 victory on April 11.

Alex Call led the cardinals in offense over the weekend, going five of 12 at the plate. Call batted .417 in the series. Ryan Spaulding went three for five, with two RBIs and a run scored in the series finale.

"The chance we will play [Kent State] in the postseason is pretty good," Maloney said. "Last year we beat them all three times we played them in the regular season, and then they beat us in the postseason."